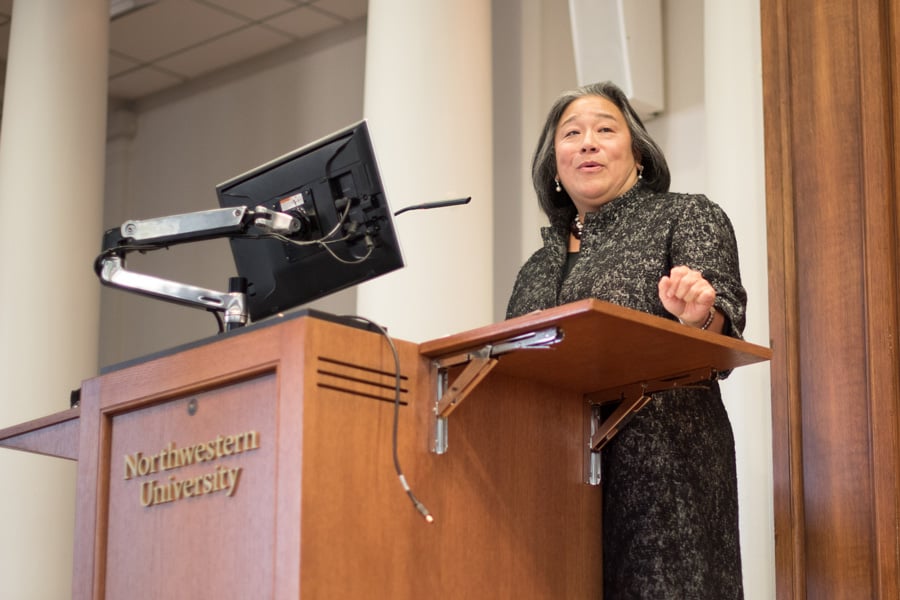 Tchen spoke Tuesday to a crowd of about 100 in Harris Hall for the 2017 Barry Farrell Lecture hosted by the department of political science. Her talk focused on what she worked on during former President Barack Obama’s administration and the importance of getting young people involved in public service.

As chief of staff, Tchen was heavily involved in developing the initiatives supported by the former first lady, she said. Tchen described a visit to the White House by Pakistani activist for girls’ education Malala Yousafzai and her father in October 2013.

“I turned to Susan Rice, our National Security Adviser at the time, when we were walking out and said, ‘We really have to work on girls’ education’,” Tchen said.

Nearly two years later, in March 2015, Tchen and her team launched Let Girls Learn, an initiative that united various governmental departments and organizations to address challenges preventing adolescent girls from getting an education, she said.

Tchen said although parity has been reached between the numbers of boys and girls attending elementary schools globally, only 12 percent of adolescent girls worldwide are in secondary or higher education, oftentimes because they are expected to have children and work at home.

To date, Let Girls Learn has raised $1 billion in U.S. investment, and even more internationally, with more than 100 company partners, Tchen said.

Tchen also stressed the importance of getting involved in public service and working directly in communities to make a difference. She emphasized that public service jobs are not just in Washington, D.C., but also on school boards, county boards and even “in people’s living rooms.”

SESP freshman Marissa Uri, who attended the event, said she wants to go into politics and that Tchen’s talk provided an important perspective.

“Hearing that (Tchen) as a young woman was also involved in grassroots activism and organizing and phone banking is really inspirational,” Uri said. “It shows that even if you’re involved in … grassroots organizing, you can still move up and have a big impact.”

Tchen also said focusing on state and local elections is especially important as midterm elections approach, as those results will determine who draws new district lines following the 2020 census.

McCormick and Communication freshman Linda Sandor said she was encouraged by Tchen’s focus on local engagement.

“It was nice to get the reinforcement,” Sandor said. “Especially coming from someone in Washington, to acknowledge that all the efforts we’re doing are actually making a difference, that we’re not just shouting into a void.”