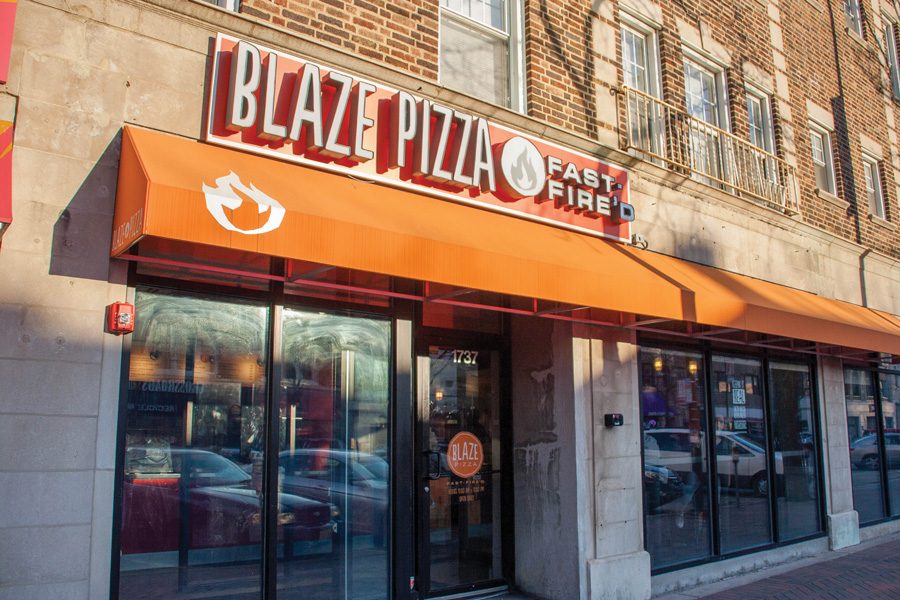 Elise Wetzel was in a rush when she stopped by a Chipotle in Pasadena, California. She’d been craving pizza, but couldn’t think of a place that combined both speed and quality ingredients.

As she watched an employee build a burrito along the restaurant’s signature assembly line, she had an “‘aha’ moment.”

“It’s really hard to get good pizza quickly,” Wetzel (Weinberg ’87, Kellogg ’92) said. “We looked at that and said, ‘There’s no reason you couldn’t apply what they’re doing to great, artisanal pizza.’ You hear entrepreneurs talk about ‘aha moments,’ and that’s what it was. I remember sitting there at that Chipotle and scratching the whole thing out on a napkin.”

Wetzel is the co-founder of Blaze Pizza, a nationwide fast-casual pizza restaurant that has grown in popularity. The Northwestern alumna founded the chain in 2011 with her husband, Rick Wetzel, who co-founded Wetzel’s Pretzels.

Blaze uses high temperature pizza ovens to ensure a crispy crust and cut down cooking time, she said. Wetzel said entering the pizza business was an “audacious goal” considering the large number of local pizzerias and national delivery chains. Because of this, she said, she had to find a “niche” for her new concept.

Larry Levy (Kellogg ’67), founder of a group developing Blaze Pizza in Chicago, called Blaze a “revolutionary concept in pizza.” The current Northwestern Board of Trustees member is the “engine” behind Blaze in Chicago, Wetzel said.

Levy said it was easy for him to get on board with Blaze’s concept, calling Elise and Rick Wetzel “visionaries” in the pizza business. Though Blaze does not fit the mold of a traditional, Chicago-style pizza, it has been received well in the area, Levy said. There are roughly 15 Blaze locations in the area, Levy said, including one in Highland Park that opened earlier this week.

Now in its sixth year, Blaze has more than 185 locations throughout the United States. Wetzel said she tries to attend as many store openings as possible, but one in particular had special significance.

Blaze’s Evanston location, 1737 Sherman Ave., opened in March 2015 and was the chain’s fifth location in the Chicago area. Wetzel said opening in her former college town was “so rewarding.”

“I can’t even tell you how excited I was; I was just so … honored to be bringing this back,” she said. “The Evanston opening was a must see.”

Although Wetzel said the opening day in early spring was unseasonably cold, students and Evanston residents formed a line down the block.

“It was so exciting to see people get it so quickly, to understand what Blaze was,” she said.

The Blaze in Evanston has a wall graphic with just a “wink of purple,” Wetzel said. She said she didn’t want to go over the top with the NU-themed decorations because her customers — many of whom are NU students — are “unconventionally wise.”

Wetzel said her favorite part about NU was involving herself in non-academic clubs and organizations. During her time in college, Wetzel was involved with A&O Productions as well as her sorority, Alpha Chi Omega. One of her closest friends, Jennifer Sant’Anna (SESP ’87), said the two met through their sorority freshman year.

Sant’Anna is now the vice president of operations for REV sustainability, a consulting group. She recalled being at Wetzel’s wedding and hearing the newly-wed couple discuss a business idea they had in the works. That business idea would later turn into Rick Wetzel’s business, Wetzel’s Pretzels.

Sant’Anna said she’s enjoyed watching Elise Wetzel and her husband develop their various businesses over the years. She called Wetzel a “serial entrepreneur” who builds her businesses with “a lot of curiosity.”

Wetzel, who majored in economics and earned a minor in the School of Communication during her time at NU, credits Northwestern’s lack of a “traditional” undergraduate business program with giving her the ability to explore different fields of study.

During her time at NU, Wetzel said she formed her own marketing degree through those two areas of study; she even wrote her senior thesis on “the impact of advertising on pricing, and how the two correlate.”

“I think your undergrad time should be spent being inquisitive in so many different areas,” she said. “There’s plenty of time to learn your accounting principles, but right now is when you should be shaping your curiosity.”