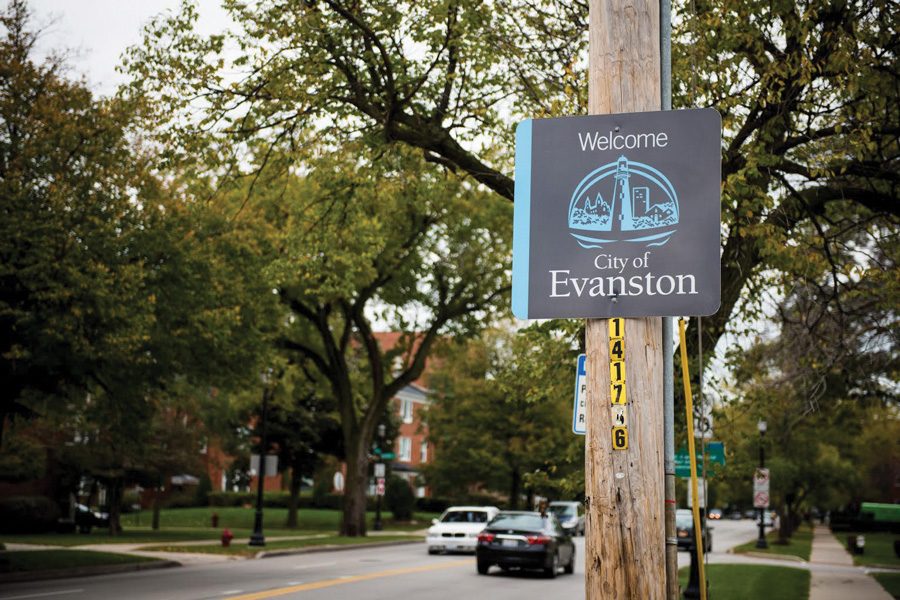 A sign welcomes drivers to Evanston at the southern end of the city. Officials unveiled a new “welcoming city” webpage at a Refugee Task Force meeting on Thursday.

Evanston officials unveiled a new “welcoming city” page on the city’s website designed to inform local refugees about resources available to them at a meeting of the Refugee Task Force on Thursday.

The webpage effort was spearheaded by the city’s housing policy and planning analyst, Savannah Clement, to create a singular location for refugees to access a comprehensive list of resources. At the meeting, Clement asked attendees to provide additional suggestions for the list, which currently contains both municipal and external resources.

Clement told The Daily the power of the task force is its ability to connect groups already helping refugees.

“The real utility of this group is to get everybody in the same room talking together, generating ideas of ways we can work together better and more efficiently,” Clement said. “That’s where I want to keep (the task force) going.”

Clement said she started work on the page in February, but that it didn’t go live until this week due to personal time constraints and the city’s larger website redesign. The city plans to promote the webpage through its social media accounts, its community engagement newsletter and a link on the website’s front page, she said.

Political science lecturer Galya Ben-Arieh, founding director of the Center for Forced Migration Studies, said she was impressed with the level of care and knowledge of the people who attended the task force meetings. She said most of the work done to resettle immigrants is done on the local level.

Ben-Arieh said the center — which resides under the Buffett Institute for Global Studies — has done work on refugee rights and protection for at least five years, and over the past year has established a specific program focusing on refugee resettlement.

“(Our work) is built on the concept that refugees are a benefit to our communities,” she said. “The way in which we resettle them in the initial year could be done better to better enable them to develop their capacities and become full contributing members to our community.”

Sarah Flax, Evanston’s housing and grants administrator, said the task force’s primary goal is to coordinate resources for refugees and help them settle into the community. She said it can be complicated to administer resources to refugees because the needs of various families can be “hugely different.”

“We’re not solving all the problems of the world, but we’re trying to at least make sure that … we can direct people to (resources) more effectively,” Flax said.

Clement said the city’s initial goal in establishing the task force was to figure out how to serve “an influx” of refugees in Evanston. However, she said, since President Donald Trump was elected the number of refugees allowed to settle in the U.S. has dropped.

Because the number of refugees has plateaued, Clement said, the task force has shifted its focus to families who have already relocated to Evanston.

“Those needs are still there and still need to be addressed, but we’re not seeing the influx in numbers that is what generated this working group,” Clement said.