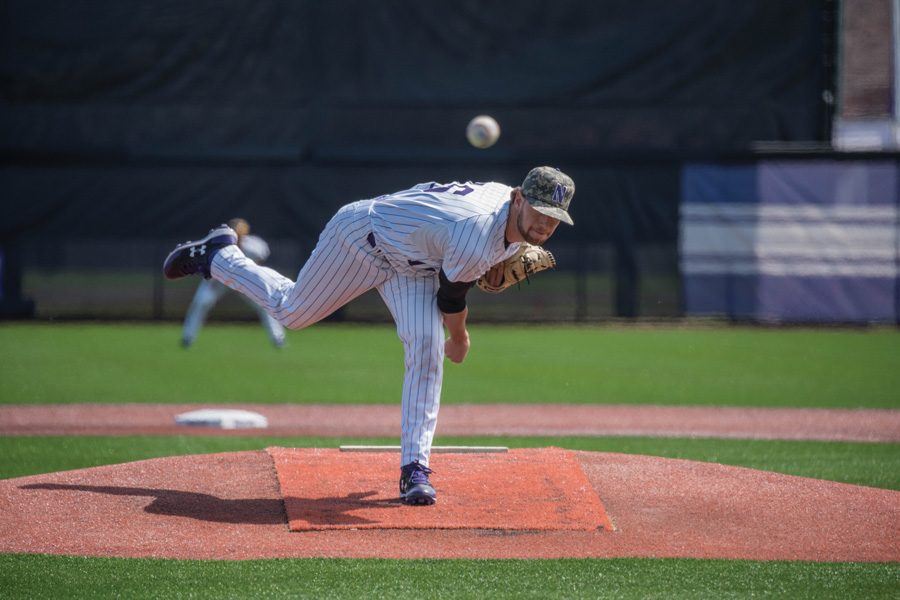 JR Reimer throws a pitch. The junior pitcher is part of a Northwestern bullpen that has struggled this year, as the Wildcats rank 10th in the Big Ten in team ERA.

Northwestern will travel east this weekend to take on Penn State in a battle of struggling Big Ten teams that could desperately use some conference wins in pushes for the Big Ten Tournament next month.

The top eight teams in the conference make the postseason tournament, but the Wildcats (14-22, 3-6) currently sit in 11th while the Nittany Lions (12-24, 1-8) are rooted to the Big Ten cellar. Coach Spencer Allen, however, isn’t taking anything for granted.

“The one thing you never do is try to figure out this league,” Allen said. “Just when you think we can sweep, we can win two or three, you lose focus. I think our biggest focus is just going to be to try to keep it game to game and not try to think about the Big Tens.”

The weekend rotation will likely be led by freshmen again, as Hank Christie and Matt Gannon reprise their roles as Saturday and Sunday starters, respectively. Recently, however, Gannon has been making shorter starts, tallying only 6 combined innings in his previous two starts.

Fellow freshman Josh Levy has come out of the bullpen and turned in solid performances on Sundays in the middle innings. Despite his 23 walks in 28 innings, Levy has the second-lowest ERA on the team, at 2.89.

Friday’s likely starter, senior Cooper Wetherbee, is the only NU pitcher with a lower ERA this year, posting an impressive 2.67 number on the year.

“The big thing for the staff is limiting the free bases,” said senior pitcher Josh Davis, who pitched 5 shutout innings of two-hit ball Tuesday against Milwaukee. “We’re going to swing the bats, so we just have to focus, take it one day at a time, focus on winning that Friday game and go from there.”

While the Cats’ pitching staff has struggled overall this season, posting a 5.57 team ERA, Penn State’s staff has actually been slightly worse on the year, with a 5.76 ERA of its own.

The Nittany Lions, however, boast a fearsome Friday starter in junior right-hander Sal Biasi. Biasi’s last two Big Ten starts have featured 15 innings pitched, and only 2 earned runs, six hits and two walks for opponents. Opponents have hit a measly .160 against the righty this season.

“They’ve got a real good arm on Friday, so we’re going to have to battle, scratch and claw on Friday,” Allen said. “We just have to focus on our Friday night game, which is going to be a tough one there at State College.”

The rest of the Penn State staff isn’t quite as good. In their last six non-Biasi Big Ten starts, the Nittany Lions have allowed 70 runs combined.

At the plate, the Nittany Lions have been rather poor as well. The squad is hitting only .226 on the year, despite the efforts of sophomore outfielder Jordan Bowersox, who enters the series hitting .333.

If the visitors walk away with a sweep, it would leave them at 6-6 in the conference, which could set the squad up nicely for a postseason push. NU knows that although Penn State is the conference bottom-feeder, every moment in all three games will be crucial for the Cats.

“We’re just going to try to be competitive in these games,” freshman outfielder Leo Kaplan said, “and put together one at-bat at a time, one pitch at a time and just continue to play hard.”