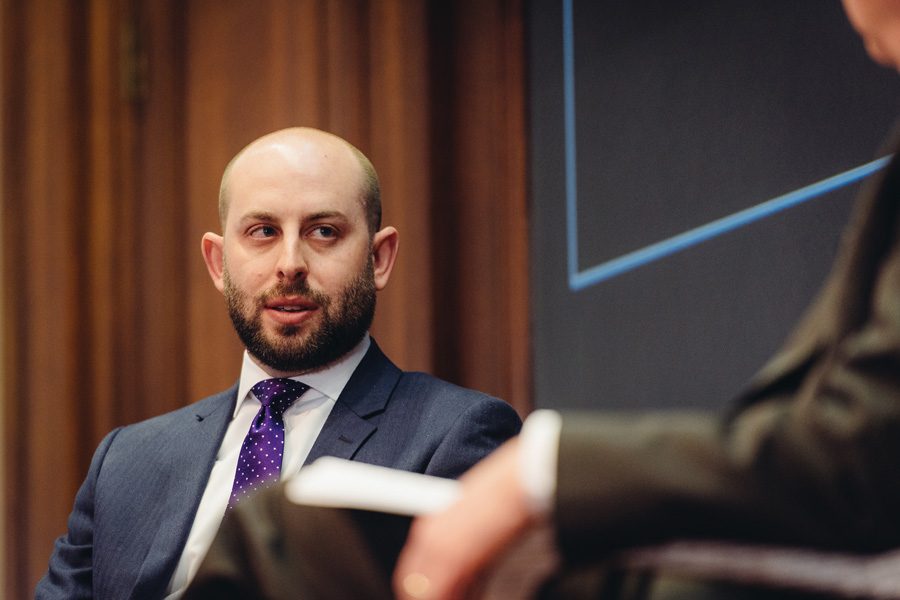 Stephen Krupin (Medill ’04) speaks at Harris Hall on Tuesday. The former speechwriter for Barack Obama shared his experiences working in the White House and gave advice to students who are looking to pursue a career in a similar field.

Former President Barack Obama speechwriter Stephen Krupin (Medill ’04) shared his experiences Tuesday in Harris Hall, the same “life-changing” building where he had his first speechwriting class during his freshman year at Northwestern.

Krupin spoke to a group of about 40 students for the 2017 Barry Farrell Alumni Lecture, a program held within the department of political science to bring professionals to campus.

When writing speeches for Obama, Krupin said the job went beyond writing down words the president would most likely use. He said he had to study the structure of the president’s arguments and how he would tell a story. After a draft was finished, Krupin said Obama would look it over and write in the margins, combining his edits with the existing text.

Krupin said Obama was a smart editor and “the best speechwriter in the Senate.” Obama was very involved in the process of crafting his speeches while working with his staff, Krupin said, and would remain calm and provide helpful feedback on the work.

“He’s very easy to work with,” he said. “People who have only written for Barack Obama are spoiled and don’t know how good they have it.”

During his career in the White House, Krupin said a memorable moment was when he helped a widow, who had lost her husband in combat, meet Obama. He said he had met her while conducting research for Obama’s Memorial Day speech in 2016, and upon hearing her request, did everything he could to grant her wish. She was seated in the president’s box at Arlington National Cemetery, where Obama delivered the speech and where her husband had been buried.

When the woman was mentioned in the speech, Krupin said, she received a “prolonged standing ovation from the audience.”

“I will never forget that moment,” he said. “I wrote the speech. I could not sit here right now and tell you a single line in that, but I’ll always remember what it felt like when all of Arlington Cemetery stood and clapped for that woman.”

Krupin criticized the Donald Trump administration and said the current president’s “good or bad” view of the world is problematic. The lack of coherency throughout the administration’s speeches is a sign of disorganization and lack of communication within the office, he said.

Weinberg freshman Annie Parker said she was especially interested in Krupin’s analysis of Trump’s administration because of his prior experience working in the White House.

“When he discussed Trump’s language and talked about how he views the world (as) black and white, I thought that was very brilliant,” she said. “I thought it was really spot on.”

To those looking to be future speechwriters, Krupin emphasized the importance of writing for the “ear instead of the eye,” thus keeping the speech simplistic yet powerful.

Weinberg sophomore Ichigo Willis, who attended the event and hopes to become a speechwriter one day, said it was inspiring to hear the experiences of a fellow Wildcat succeed on Capitol Hill.

“I just wanted to know the experiences of someone who actually is a speechwriter,” Willis said. “Him being an (alumnus) is super significant to me, just to be able to possibly follow a similar path, to be able to set myself up in a position that would allow me to get to the point of success that he is at.”