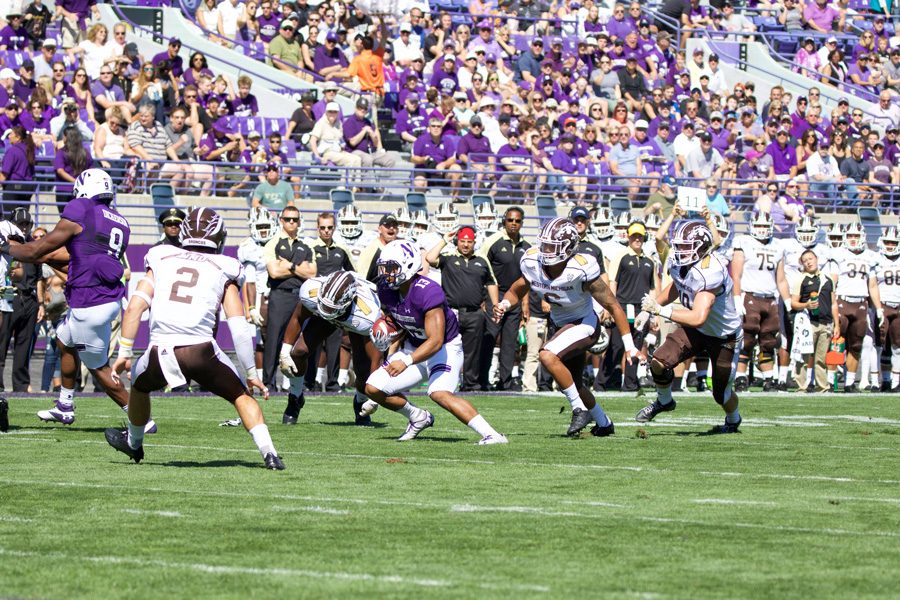 Warren Long returns a kick. The former running back has moved to linebacker this offseason.

In his free time, Warren Long produces music. In his playing time, the rising fifth-year senior — formerly a running back — plays linebacker.

Somehow, he’s managed to take the skills he’s learned from producing and apply them to football.

“Classical music, it’s all about technique: you go here, you go there. I would say that’s offense,” Long said of his transition from running back to linebacker. “Defense is like jazz. They’re going to put you in a position, but it’s up to your interpretation.”

Long certainly received plenty of time in spring practice to find his rhythm. With Anthony Walker declaring a year early for the NFL draft and returning starter Nate Hall out temporarily with a minor arm injury, Long proved a much-needed addition for a Northwestern linebacking group struggling with numbers.

In front of a small crowd at Ryan Field for the final spring practice earlier this month, Long played alongside rising senior Brett Walsh — the only linebacker other than Hall already penned into a starting spot — rising sophomore Nathan Fox and redshirt freshmen Paddy Fisher and Jango Glackin.

Those were the only five healthy linebackers the Wildcats had.

“Adding Warren now gives us an experienced six guys,” coach Pat Fitzgerald said. “I don’t think I had six healthy the whole year last year, so we’ve got better depth right now than we did a year ago, even though we don’t have enough bodies.”

Three incoming freshman linebackers who aren’t on campus yet will be available in the fall, and Fitzgerald said he’s expecting to add a few walk-ons, too.

Long nonetheless figures to have a reasonable shot at seeing the field a significant amount come the Sept. 2 season opener against Nevada — a reality that speaks to both NU’s inconvenient depth chart situation at the position and Long’s hard work.

“He’s by far farther ahead than I would’ve expected,” said linebackers coach Randy Bates. “After 15 practices, I think he understands it well. He’s got great speed and agility, and he’ll knock the crap out of you. It’s just a matter of him getting a lot of reps.”

While learning the ins and outs of linebacking, Long has also shared wisdom about the perspective of the running backs that his new position group teammates are trying to tackle. The knowledge Long has brought to the group from his unusual background has made him an important resource in the film room, Hall said.

“When we’re watching film and we’re trying to read tendencies of running backs and what they’re taught during certain plays, I’ll look back and ask him or Coach Bates will ask him, ‘When you were a running back, were you taught to do this, this and that?’” Hall said. “And he gives good insight on that, so I think he’s definitely an asset in the room.”

Perhaps because of the limited reins under which he is operating, Long, whose idea of the position change was initially shot down by Fitzgerald last fall before being made official in February, said he is unsatisfied with his performance as a linebacker to date.

“I’m not quite happy with where I’m at, but I guess I made reasonable progress,” Long said. “My standards are really high and I’m not there yet, nowhere close.”

But Fitzgerald, for one, has a different opinion.

“He’s learning every day, he’s embraced the role … he’s got some instincts and can fly around,” the coach said. “I’m very, very excited about his progression.”