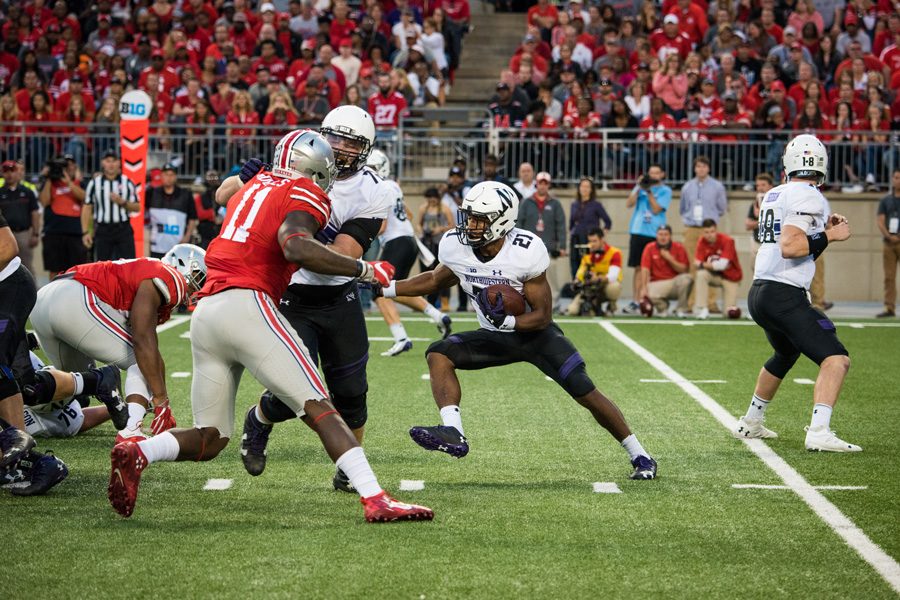 Blake Hance (left) blocks for Justin Jackson. The rising junior is among the leaders on the Wildcats’ offensive line.

Throughout last season, Northwestern coach Pat Fitzgerald was never shy about criticizing his offensive line when it was deserved.

“Our O-Line got outplayed,” Fitzgerald said after a humbling September loss to FCS foe Illinois State. “There’s no way I could have predicted that our offensive line would be as inefficient as they were today.”

It often didn’t, though, putting the players up front in the crosshairs.

“(Fitzgerald) didn’t even have to criticize us,” rising junior tackle Blake Hance said. “We knew most of the time when we were doing things wrong.”

With Thorson and Jackson returning, the Cats again have the raw materials for a consistently productive offense — and again have questions to answer along the offensive line.

“It’s no secret who we have at the skill positions,” offensive line coach Adam Cushing said. “It’s going to be pretty cool. But we’ve got to win our one-on-one battles, period.”

Rising junior Tommy Doles looks to be the leader of the unit heading into next season. The charismatic lineman saw his first major action as an every-game starter last year, mostly at right guard, and earned an All-Big Ten honorable mention nod for his efforts.

After that breakout season, Doles has stepped into a bigger leadership role among his linemates in the spring, his position coach said.

“Our conversation this offseason has been that he’s got to be more … not a soldier, more of an officer,” Cushing said. “We need him to step up and be a voice for the group.”

Around Doles, NU brings several other familiar names into next season. Hance will likely hold down the left tackle spot he filled in 2016, while rising junior J.B. Butler and rising senior Brad North should see the field after ending the season as starters at left guard and center, respectively.

Those players will be supplemented by a group of younger players who made a push for playing time in the spring practices. Cushing said freshman Gunnar Vogel and rising sophomore Andrew Otterman are in a “wide-open” competition for the starting right tackle job, and he mentioned being impressed by rising sophomore Jared Thomas in the spring as a reserve on the interior.

For a unit that “didn’t have enough guys ready to go” last season, Cushing said, some semblance of depth is a welcome change. Doles said bringing the new faces up to speed was a focus of the spring practice period.

“A big part of it was helping the younger guys who haven’t had playing experience understand the tempo of Big Ten football, the mindset, the attitude that it’s going to take,” Doles said. “We’ve seen some significant progress.”

Still, much of the group that frequently limited the Cats’ offense in 2016 is back, looking for redemption. And after a season full of criticism, their improvement figures to be a key to setting NU’s ceiling in 2017.

“That development between now and the opener with our offensive line is going to be a really strong indicator, I think, of where we’re at and where we can potentially go,” Fitzgerald said. “We’re going to go where that group takes us.”