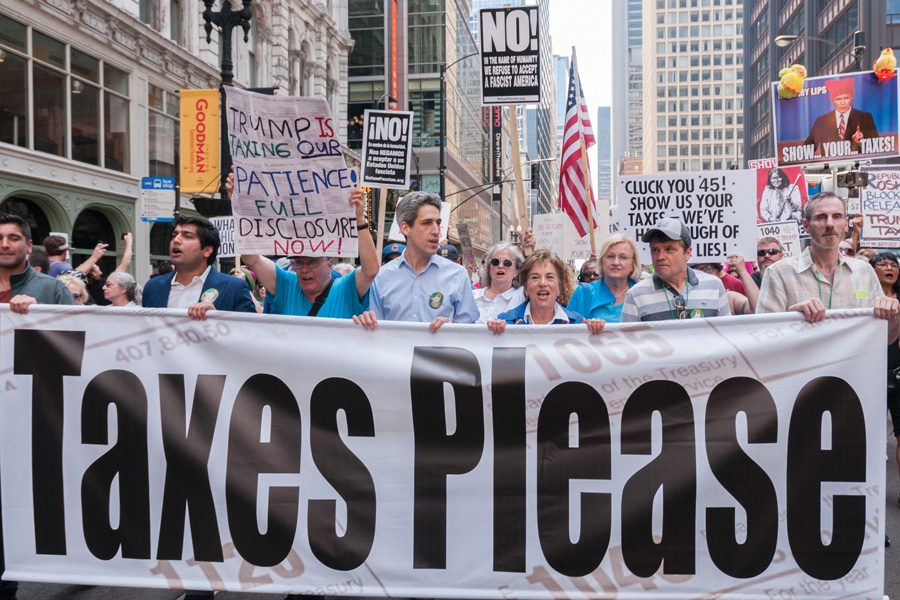 State Sen. Daniel Biss (D-Evanston) and U.S. Rep. Jan Schakowsky (D-Ill.) walk in the Chicago Tax March on Saturday. The two politicians were among a number of speakers calling on President Donald Trump to release his tax returns.

The march — attended by thousands of protesters — called for President Donald Trump to release his tax returns. It was one of about 200 such marches held across the country ahead of Tax Day on Tuesday. U.S. Rep. Jan Schakowsky (D-Ill.) and State Sen. Daniel Biss (D-Evanston) spoke, as did Rep. Mike Quigley (D-Ill.) and the Rev. Jesse Jackson Sr.

“Stop being a chicken, Mr. President, and release your tax returns,” the Chicago protest’s organizer Taran Singh Brar told the crowd, standing next a 30-foot inflatable “Chicken Don.” The float was crowdfunded by more than 80 people ahead of the Saturday march.

Sousaphones Against Hate — a Chicago-area brass band formed to resist the Trump administration — led the crowd in the Chicken Dance, following with the Beatles’ smash hit “Taxman.” Other demonstrators chanted “Chicken in Chief” while holding signs that read “Grab Him by the 1040,” a reference to the IRS filing form.

Brar, a documentary filmmaker, told The Daily he is not a professional activist, but that with some hard work, anyone can start a protest and mobilize thousands of people. In addition, Brar said the release of tax returns is a non-partisan issue supported by a majority of Americans, which makes it especially compelling.

“That’s been missing, and it kind of hurts the activist left protest scene that they don’t fully explore that element … they overlook how potent some of this humor is,” Brar said. “People like laughing … so I keep going back and saying, ‘Chicken Don, what’s in your nest egg?’”

Trump, in a break with tradition, has consistently refused to release his tax returns. Though presidents are not legally required to make their returns public, Trump is the first president in 40 years not to do so. He has repeatedly claimed that only the media was interested in seeing his returns.

In response to the national protests, Trump on Sunday tweeted that, “Someone should look into who paid for the small organized rallies yesterday. The election is over!”

Michael Mellini, a Chicago resident who attended the protest, said he disagrees with Trump’s statements.

“Trump keeps complaining that the media are the only people interested in his tax returns,” Mellini told The Daily. “As a private citizen, I think we’re here to display that that’s not true. We’re here to show that we’re not forgetting about his ties and we want to know the truth.”

Biss told The Daily he expects the bill to pass in the Illinois State Senate, saying it would be politically embarrassing for Gov. Bruce Rauner to veto the bill. Rauner has consistently released his two-page 1040 tax returns since his gubernatorial candidacy in 2013.

At the event, Schakowsky said the public needs to know if Trump is exploiting his presidency to enrich his private interests. Without the president’s tax returns, she said, Americans have no way of knowing the extent of his ties with Russia.