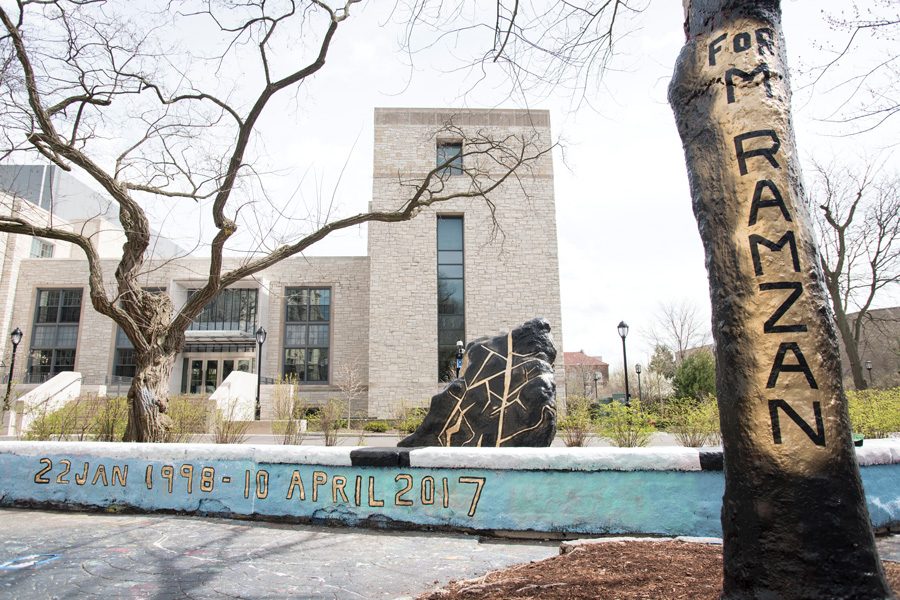 The Rock is painted black and gold to memorialize the death of first-year student Mohammed Ramzan. The students who painted The Rock are asking that it is left unpainted for at least three days to respect the beginning of the Muslim mourning period.

Less than a week after the death of first-year student Mohammed Ramzan, Communication freshman Kimani Isaac said she started processing the loss of her friend while guarding The Rock.

Using only smartphone flashlights, Isaac and a few other students began to paint The Rock black 24 hours later, as a sign of mourning for their friend. They then painted intersecting gold lines over the black paint. The paint, which Isaac said was inspired by the Japanese practice of kintsugi –– a method to repair broken ceramics with a lacquer mixed with gold –– represents both the fracturing and coming together of a community after a death.

“The Rock, for many of us, symbolizes community,” Isaac said. “This community was drenched in mourning, which was the black, but fractured in a way that is somewhat more beautiful than it was before, because it’s revealing something that was underneath, which is our love for each other.”

Ramzan passed away after he fell off a nine-person shell during a Northwestern men’s crew team practice on the North Shore Channel on April 10. His death was ruled an accidental drowning, according to a Cook County Medical Examiner’s report.

Isaac helped organize the painting of The Rock, and said she appreciated the eagerness of many other QuestBridge Scholars to help guard and paint it, as it brought a community of friends together. Ramzan was a QuestBridge Scholar.

For Sophia Ruark, the temporary memorial was a therapeutic way to show her love for Ramzan, who she had seen a few days before the accident. The McCormick freshman said if there are ever future tragedies, she hopes other people could use The Rock as a public memorial.

Isaac asked other students and organizations to not paint The Rock for at least three days to respect the beginning of the Muslim mourning period. An Arabic saying, “May God make heaven his abode,” is painted on the side of The Rock. Students may also leave candles, flowers and pictures at The Rock, Ruark said.

Ruark said she hopes students remember Ramzan’s memorial after others paint over the design.

Even though Adam Davies didn’t know Ramzan well, he said he felt compelled to help by picking up paint and guarding The Rock for a few hours.

Davies, a Weinberg freshman, said he was touched during Ramzan’s memorial service when he learned Ramzan wanted to be a doctor and eventually open a clinic for LGBTQ people. Davies said he wanted to honor Ramzan because he was “incredibly warm and kind.”

“Even in the five minutes that I had met him, he had touched my life, and I remembered that,” Davies said. “So the amount of impact that he made on campus was huge.”

The Rock is only a temporary tribute, and Isaac said she wanted to make sure future groups weren’t “demonized” for painting over the memorial –– she said it was all part of the grieving process and moving on.

Isaac said she wanted to “retroactively” thank Ramzan for his impact on her life.

“The point is not to forget Mohammed, but the point is to acknowledge that he was here, he made an impact and we need to continue on,” Isaac said.