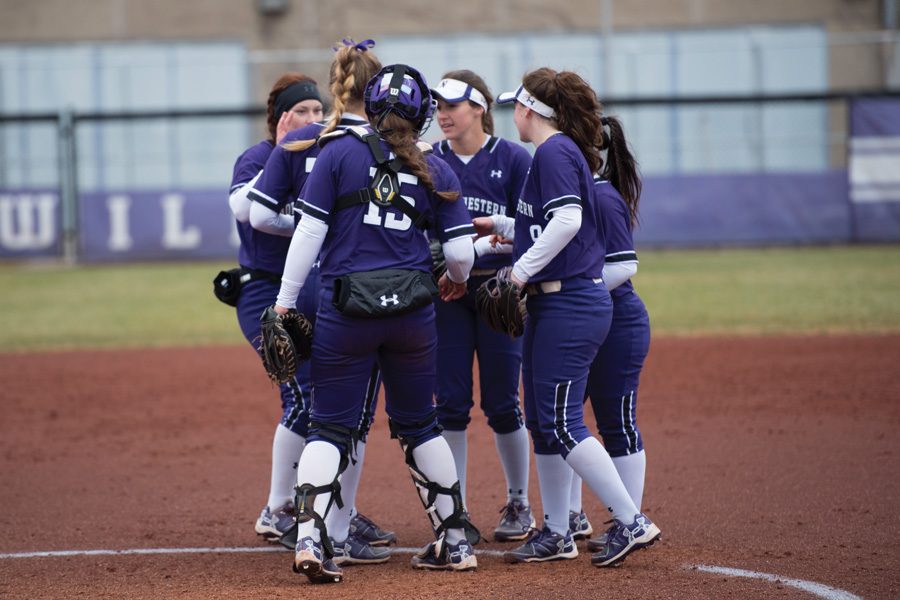 Several Wildcats converse in the circle. Northwestern was shut down in a series sweep at Minnesota this weekend.

Coming off a strong showing against local rival Loyola and a series win against Maryland, Northwestern seemed ready to challenge one of the top teams in the country. But it was not.

The Wildcats (16-23, 3-9 Big Ten) were swept in three games by Minnesota (38-3, 11-1) this weekend. NU came in after winning three of the four previous games, while the Golden Gophers entered winners of five straight.

Northwestern fell 6-2 in the first game Friday, which lasted four hours due to three different rain delays. The Cats kept it interesting on Saturday, however, losing just 3-2 in a pitcher’s duel between NU’s Nicole Bond and Minnesota’s Amber Fiser.

Bond went the distance in game two, tossing a complete game two-hitter. But due to errors and walks, the Golden Gophers scored 3 runs, with one unearned. In the series finale Sunday, Bond struggled, walking four and surrendering a total of 6 runs, before being replaced after just 1.1 innings.

“Her performance on Saturday was outstanding,” coach Kate Drohan said. “I thought she competed well and did a great job of keeping us in the ballgame.”

In the closing game of the series, the Cats were blown out 8-0 in 5 innings, when the game ended due to the run rule.

Minnesota’s senior ace, Sara Groenewegen, was a major factor behind the sweep, as she silenced NU’s bats in the series’ opener and finale. She recorded wins in both games, improving to 19-2 with a 0.68 ERA. Groenewegen’s dominance was on full display, as she tallied 21 strikeouts and walked just one over the span of 12 innings.

Both senior outfielder Anna Petersen and Drohan noted NU’s failure in effectively carrying out its intended strategy against Groenewegen.

“Our goal was to take the ball out of Groenewegen’s hands and put it in their defense’s hands, and we didn’t execute that plan in a lot of ways,” said Petersen. “We failed to make their defense work, especially (Sunday).”

Petersen, last week’s Big Ten Player of the Week, went 2-for-9 throughout the series with one RBI. She said the Cats can learn a lot from competing against the Golden Gophers.

“Everyone on their roster is willing to do whatever it is to win a game, and that’s regardless of if it’s their starters or their bench,” Petersen said. “Our team had a very fortunate experience of getting to watch how a team, that has won so many games, operates in the dugout and on the field.”

NU will be back in action Wednesday, beginning a five-game homestand against DePaul.

Drohan said the Cats didn’t execute their gameplan and struggled offensively across the three games. Over the weekend, the Cats only had 12 hits.

“There were many moments, both how we functioned as a team and some individual moments, so we have a lot to continue to build on,” Drohan said. “We have to look forward to DePaul and putting a complete game together.”