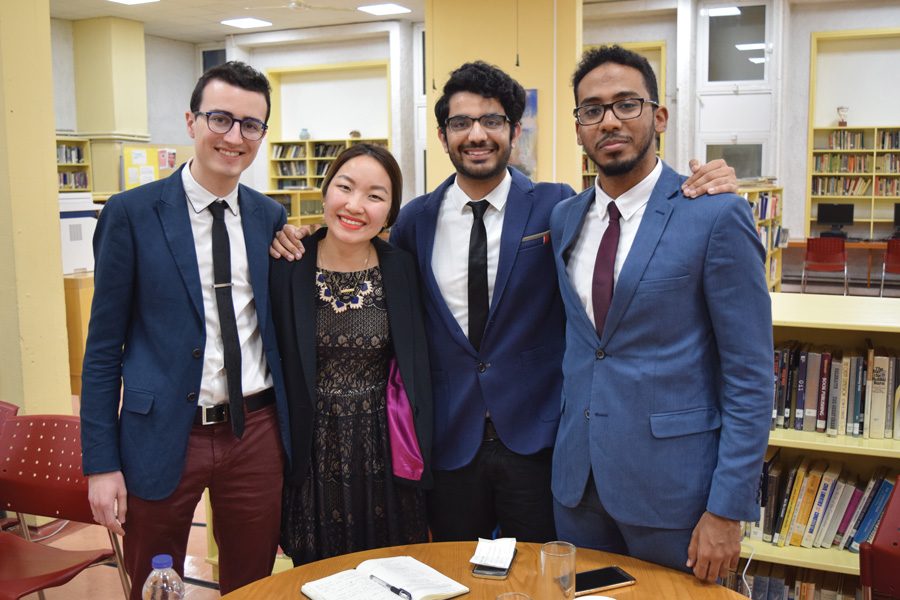 Shakeeb Asrar (second from right), a senior at NU-Q, poses with fellow participants of the WISE Learners’ program in Greece. Participants spent two weeks volunteering with refugees and learning about the refugee crisis in the context of education.

“It was demanding physically and also emotionally and mentally,” Asrar said. “Every day I would learn something I did not expect.”

Asrar, a senior in the Medill School of Journalism, Media, Integrated Marketing Communications at NU-Q, traveled to Greece in March as part of the World Innovation Summit for Education Learners’ Voice program.

WISE Learners’ Voice program participants come from all over the world and get involved in a project that tries to solve a problem in education. Asrar said the theme this year is the global refugee and migrant crisis.

The two-week trip to Greece is just one part of the year-long program, which began in November. Asrar said participants first completed online learning modules before going to Greece, and will meet again in the summer to further develop their projects before presenting them in Doha, Qatar in November.

Asrar said the purpose of going to Greece is for students to experience the issues they are creating their projects around.

“The greatest impact was working with the refugees and realizing how big the problem is and the scale of the refugee crisis,” Asrar said.

In addition to studying journalism, Asrar is getting a certificate in civic engagement from the School of Education and Social Policy. To complete the requirements for the certificate, Asrar spent a quarter at Northwestern’s Evanston campus, another quarter in Chicago for the Engage Chicago program and took several classes remotely.

When he heard about WISE, Asrar said he saw it as an opportunity to take what he was learning in his SESP classes and put it into practice.

Urooj Kamran Azmi, a senior studying communications at NU-Q, is also getting her certificate in civic engagement from SESP and said both she and Asrar are passionate about volunteering and social activism.

“He is able to combine his journalism experience and his social activism and I think that’s what sets him apart,” Kamran Azmi said.

Originally from Pakistan, Asrar said he plans to go back home after graduating and hopes to find a way to merge his interests in journalism and education by using media to improve education.

As a journalism student, Asrar said he had been following the refugee crisis closely in the media. But when he arrived in Greece and began volunteering, he said he felt like he knew nothing about it.

“What you understand from the media is only one part of it,” Asrar said. “You can’t grasp the scale of the issue or how complicated it is until you’re in the middle of the crisis.”

University of Pittsburgh graduate student Christina Ong, who is on the same project team as Asrar, said their volunteer work, though important, could often be depressing and that humor was the only way she could get through the more challenging aspects.

Asrar brought this lighthearted spirit to the program, Ong said.

“Shakeeb is very passionate and committed to whatever he is doing, but also has a wonderful sense of humor which I think you really need, especially when working on issues that are hard to work through,” Ong said.

A previous version of this story misstated the number of quarters Shakeeb Asrar spent studying at Northwestern’s Evanston campus to complete a SESP certificate. Asrar spent one quarter studying in Evanston and another in Chicago. The Daily regrets the error.