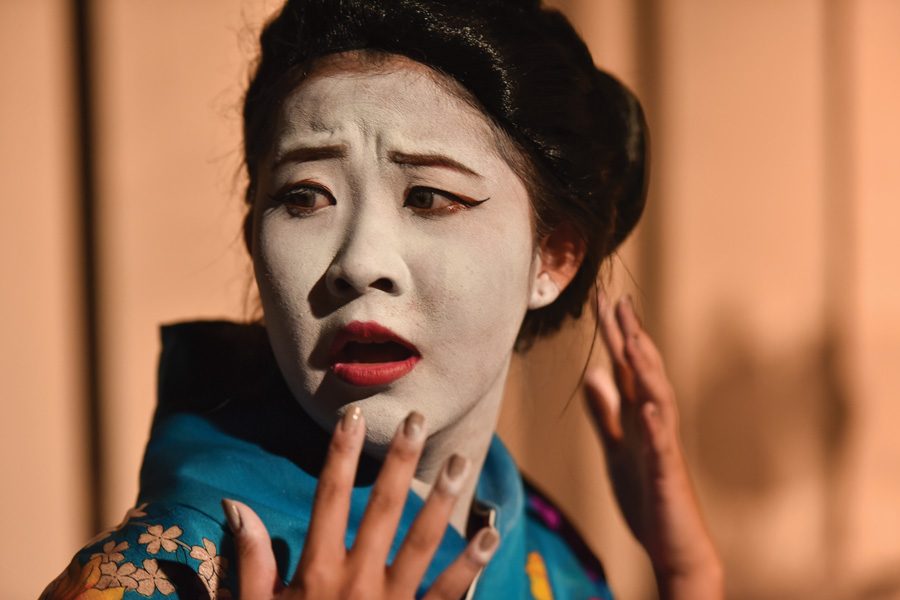 Communication senior Sharon Wei performs in “This is Not a True Story.” The play, written by Communication junior Preston Choi, features an all-female Asian cast.

As Hollywood continues to face criticism for using white women to play Asian roles, a group of Northwestern students will put on a play featuring an all-Asian, female cast this week.

Vertigo Productions play “This Is Not a True Story” features three Asian women who have been misrepresented and dehumanized by white media, said cast member Mari Uchida, a Communication senior. The play’s main character is based on Takako Konishi, a woman from Japan who committed suicide in Minnesota in 2001. Although not much is known about her, Uchida said, the white media painted her as a “foolish” woman. The play was written by Communication junior Preston Choi.

Choi said the inspiration for the play came from the film “Kumiko, the Treasure Hunter,” which is about the fictionalized version of Konishi’s life.

“I found it odd that there was no other piece of art talking about who she was as an actual human and her actual life,” he said.

In the first act of the play, Konishi interacts with two fictitious Asian characters — Cio-Cio from the Italian opera “Madama Butterfly” and Kim from the musical “Miss Saigon” — created by white men. She interacts with them in an abstract space where their stories are focused on white narratives, Uchida said. Gradually, the characters break away from these narratives and enter the real world, she said.

Characters like Cio-Cio and Kim lack the capacity to act individually because they were written to be a “white man’s dream” of what an Asian woman would be, Uchida said.

“It’s so important to give minorities agency because in the real world, we all are fully capable people who have actions, who have motives, who have desires, and we don’t just fall into this idea that has been forced onto us,” Wei said.

For Uchida, the play is important in the fight against underrepresentation in the media. If Asian Americans do not take the initiative to tell Asian stories, then the lack of visibility will remain the same, she said.

Uchida said she has experienced the lack of Asian representation in theater firsthand, as this is her first time playing a character that reflects her Japanese identity.

“I have played all different characters on the, quote, ‘Asian umbrella,’” Uchida said. “I think the closest I got to Japanese in the past was when I played a fourth-generation Japanese-American woman, which is not quite the same.”

Choi took care to accurately represent characters in the play by asking women for their perspectives and researching Japanese culture, Uchida said.

“Preston Choi is such a wonderful writer,” she said. “He has done so much research and has given so much intricate care with the show … It’s really, really refreshing to walk into a room and see other people who are just like me with the majority of it.”