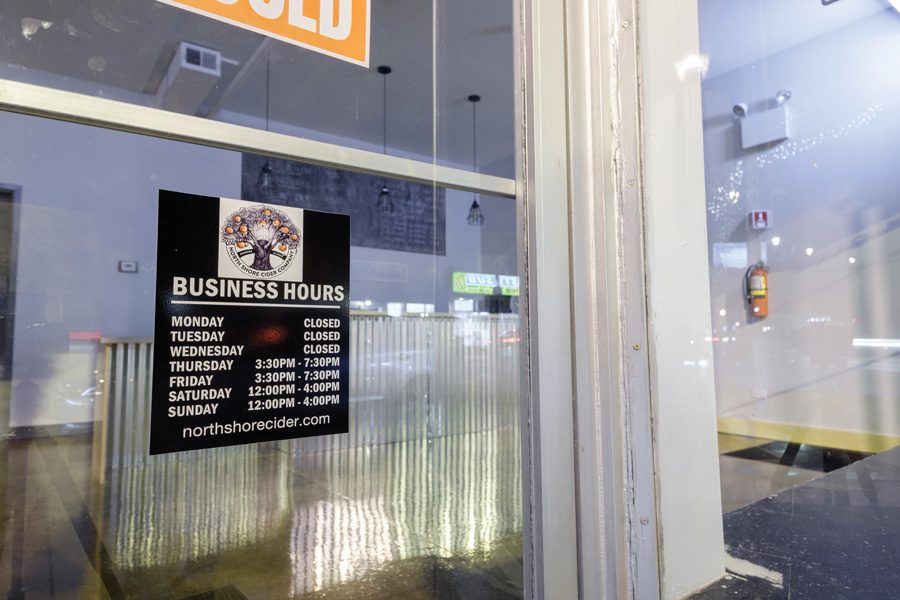 “It didn’t turn out so great,” he said. “It was an early lesson on using the absolute best ingredients.”

Soon after, Collins bought his own apple press and began experimenting with different types of apples. This year, he opened Evanston’s first cidery.

North Shore Cider Company had its soft opening in south Evanston on Feb. 23. The cidery offers free tastings and allows customers to fill up growlers of cider to go, Collins said. He said all distilling and fermentation happens on the property, 707 Howard St. He also plans on having a monthly special event with full pours of cider and food. And the upcoming warmer weather will generate more business, Collins said.

Collins said his cider is “full of flavor” because it is made with fresh juice from apples grown at Earth First Farms in Berrien Center, Michigan.

He is currently the only employee at the cidery, but he hopes to expand eventually.

“I would love to grow to enable me to hire more people, and it’s something I foresee happening,” he said.

When searching for a location for the cidery, he ultimately settled on Howard Street, a commercial corridor in Evanston’s 8th Ward, because he wanted to be a part of the Howard Street “restoration,” he said.

“It would be a natural fit for a cider business to want to open near those two businesses in Evanston because we’ve become increasingly a foodie destination,” Leonard said. “To not work to bring retail destinations, restaurants and service to that neighborhood is to do a disservice to economic development in Evanston.”

His ciders are also on tap at a number of local bars and restaurants, including Smylie Brothers Brewing Co. and Found Kitchen and Social House.

Brandon Lowe, head bartender at Found Kitchen and Social House, said the restaurant in downtown Evanston started carrying North Shore cider in March. He said he’s noticed that customers are interested to try the hard cider because it is brewed locally in Evanston.

“We try to support the local and small batch stuff as much as possible,” Lowe said. “Finding a local cider was awesome for us, because that’s our philosophy here — everything we serve is coming from within 100 miles of our restaurant.”

Leonard said cider is currently a popular drink because it “builds off of the craft brewery movement.” She said even nationally customers increasingly look for local small businesses to patronize.

As for the future of the cidery, Collins hopes to have a cider and cheese pairing event in late April.

“Most folks think of wine and cheese going well together, and I wanted to showcase that cider also has some of those properties that bring out the best of the cheese,” he said.