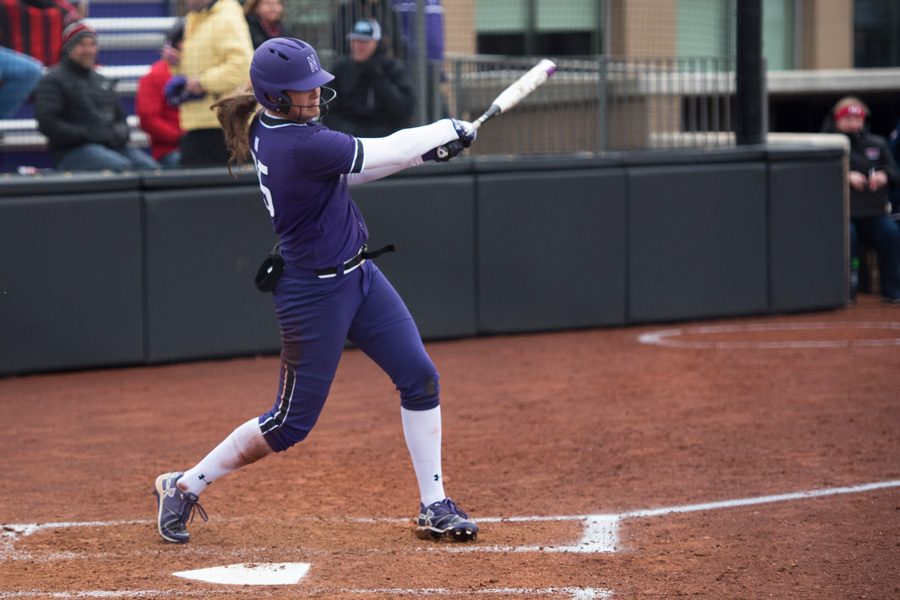 Anna Petersen swings at a pitch. Petersen hit eight RBIs in last weekend’s series against Maryland and was named the Big Ten Player of the Week.

Days after winning its first series of the season against Maryland, Northwestern will attempt to add onto its momentum in a non-conference game at Loyola on Wednesday afternoon.

The Wildcats (15-20, 3-6 Big Ten) came out swinging against the Terrapins, averaging 7 runs scored per game and hitting a combined .320. The aggressive approach, in contrast to the offense’s silence against then-No. 20 Michigan a week before, helped NU win the first two games of the series and almost complete a sweep with a close loss in the finale.

Petersen said NU shouldn’t tread lightly as it travels downtown to face the Ramblers (18-17, 1-11 Missouri Valley), even with her hot streak and the offense’s recent upswing in consideration.

“We just need to keep doing what we’ve been doing and not take any games for granted, especially Loyola,” she said. “They’re a good Chicago softball team, and they always play us hard. … Right now, Loyola is our most important game of the year.”

Although Loyola is currently at the bottom of a tight Missouri Valley Conference, it is currently experiencing an up year with the winning record it has tallied thus far after posting losing records the past three seasons.

Last spring, NU only needed six innings to beat Loyola 9-1 by the run-rule in what gave coach Kate Drohan her 500th career win as manager of the Cats. But like Petersen, Drohan said she and the team will prepare for the game as they would any other.

“Loyola is a well-coached team,” Drohan said. “They have a lot of good athletes, and their pitching has been tough this year. But it’s a game our team will be ready for.”

The Cats have had a few days in between to clean up some of its costly mistakes from the weekend. Notably, uncharacteristically poor defense and a lack of clutch hitting doomed the team in the third game of the Maryland series, a 5-4 loss.

In total, NU committed eight errors against the Terrapins. Three of them came in the second inning of Sunday’s finale, the same inning in which Maryland scored all 5 of its runs.

“There were a lot of mental errors made,” said junior centerfielder Sabrina Rabin. “We just need to be dialed in every pitch.”

Drohan responded to the defensive collapse by shifting some of the Cats’ infielders to different positions and inserting senior Alcy Bush into the game, changes she said could become permanent in the weeks ahead.

But Drohan also said she doesn’t see Sunday’s loss, or the struggles that NU exhibited in it, as having much consequence on the Cats’ momentum and their hopes to climb up the Big Ten’s standings.