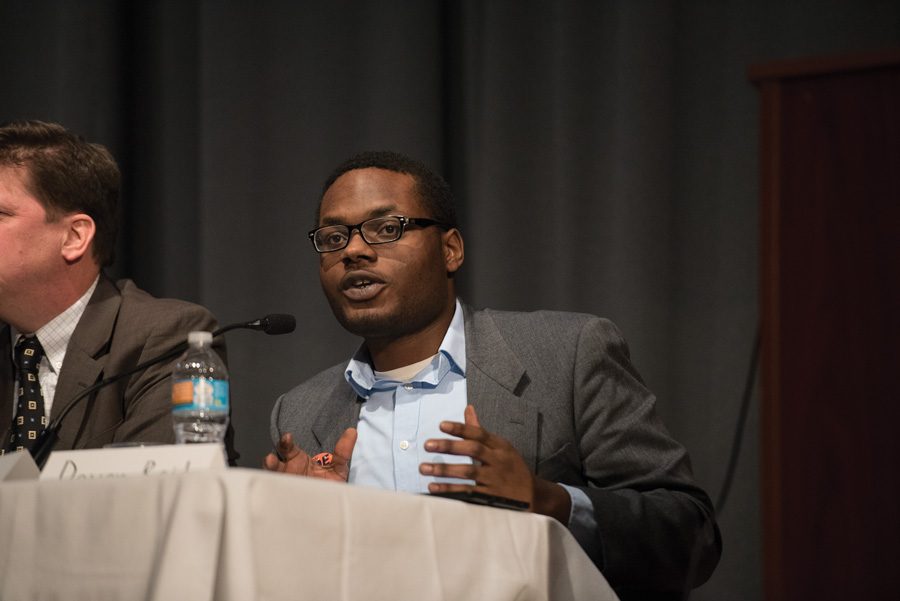 Devon Reid speaks at a forum. Reid, who was elected Evanston’s next city clerk, was endorsed by Reclaim Evanston — an organization that supports progressive candidates.

The organization endorsed and supported the campaigns of Robin Rue Simmons and Devon Reid, who won the positions of 5th Ward alderman and city clerk, respectively. In addition, the group worked with Rob Bady, who narrowly lost the 8th Ward race against incumbent Ald. Ann Rainey (8th), according to unofficial numbers from the Cook County clerk website. It also supported Alex Block, who lost to incumbent Ald. Melissa Wynne (3rd).

Reclaim Evanston is a chapter of Reclaim Chicago, an organization dedicated to aiding progressive candidates and fighting for economic, racial and gender equality. Tyler Darnell, an organizer for Reclaim Evanston, said the group works with its grassroots leaders to interview candidates, and — if they align with its policy ideas and share its views — endorse their campaigns.

“We work with (the candidates’) campaigns to different degrees,” Darnell said. “We are led by our grassroots leaders in these areas.”

When candidates are endorsed by the organization, its volunteers go door to door canvassing and speaking to residents. Darnell said volunteers also make phone calls to potential supporters.

When workers with Reclaim Evanston knock on doors, Darnell said they do not immediately focus on the candidate and their position, but ask the resident for their concerns.

“We try to start our conversations first with people based on values, before we talk about candidates,” he said. “We try to … ask them what kind of problems they see in their community, what they want to be fixed, what Evanston could be like ideally for them.”

A news release sent out by Reclaim Evanston states that in the months leading up to the April 4 election, the organization made a combined 25,000 door knocks and phone calls. According to the release, the group had 400 volunteer shifts for its endorsed candidates from the beginning of January until the election.

Simmons, who was endorsed by the organization, was elected as 5th Ward alderman with nearly 61 percent of the vote. She said the group’s support was an honor, and that the organization’s values on affordable housing and “liveable” wages lined up with her own.

Reid, who won his race with 63 percent of the vote, was also endorsed by the organization.

“Their support made a huge difference to my campaign,” Reid said. “We were going to doors every single weekend talking to voters one-on-one. There’s nothing like face-to-face contact with other folks who are passionate about their community and making it a better place.”

Darnell said his organization places an emphasis on municipal elections. He said local issues are what affect residents in their everyday lives, and get people interested in politics. Evanston had the second highest turnout rate — roughly 36 percent, or more than 18,000 voters — among Cook County municipalities with contested mayoral or presidential races.

“(Municipal elections) are no less important than a presidential election, or an election for Congress,” Darnell said. “Talking to people about the stuff that impacts them every day — like potholes and rat problems — is the place where you can most get people interested in politics.”

This story has been updated with additional information.