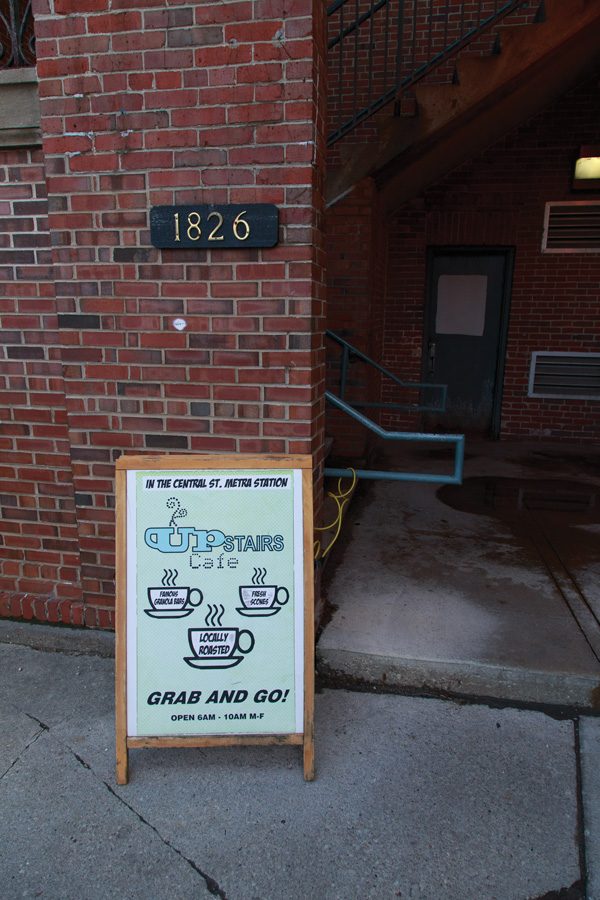 A sign outside Upstairs Cafe at Central Street Metra. In early May, the owners of Upstairs Cafe will have to vacate the property after failing to reach an agreement with Union Pacific railroad.

For the first time in more than 30 years, Evanston’s Central Street Metra station will be without a cafe to provide early morning commuters with their daily dose of caffeine.

In early May, the owners of Upstairs Cafe will have to vacate the property, five years after taking over from Mary Lou Smith, who ran the cafe’s first iteration, Top of the Tracks. Owners Elizabeth Hubbard, Gail Doeff and Shelley Patterson took over for Smith when she retired in 2012. Housed in the 100-year-old station, the cafe is open on weekdays from 6 a.m. to 10 a.m. — prime time for commuters from Chicago’s northern suburbs on their way downtown.

Union Pacific railroad, the company that runs the Central Street station, and Upstairs Cafe could not come to an agreement on terms of a lease. Evanston owned the cafe’s space until its lease ended in July 2016, at which point Upstairs Cafe sought to negotiate a new lease with Union Pacific directly.

“We’re really sad about the end of an era in Evanston at the expense of all these (customers) just because Union Pacific is trying to maximize revenue,” Hubbard said.

In a statement provided to The Daily, Union Pacific spokeswoman Jae Miller said the railroad company had a long-term lease with Evanston. Upstairs Cafe operated under a sublease with the city, Miller said, not through an agreement with Union Pacific.

Union Pacific began discussions with Evanston in mid-2016 regarding the expiring depot lease, Miller said. The lease ended last July, but Upstairs Cafe was allowed to remain in business for several months while terms of a new lease were discussed. Miller said an agreement could not be reached.

During the months of negotiation and discussion, Miller said Union Pacific did not seek compensation from Upstairs Cafe. However, Hubbard said she and her co-owners had minimal communication with the railroad company and were not made aware of how to go about paying rent during the time they did not have a lease.

Eventually, she said, she reached out to Union Pacific to clarify the situation only to hear that the company didn’t want to extend in a lease with the cafe.

“I was shocked,” she said. “We weren’t looking to be there for 24 years like Mary Lou, but we were certainly hoping for a five-year lease.”

Hubbard said she and her co-owners spoke with a lawyer and decided they “legally did not have a leg to stand on,” at which point they began to tell customers about the impending closure.

Miller said Union Pacific is in the process of identifying “the most effective use of the space at Central Street station.” She added the company was looking for something that would “complement and enhance local economic development.”

Evanston resident Paul McMahon said he’s been going to the cafe for about 20 years and calls his mornings there the “best part of the day.” McMahon called the cafe a “community gathering place” and a “staple” in the Evanston community.

“People are pretty devastated,” he said. “We don’t have a lot of spaces like this anymore; it makes Evanston — which is a pretty big town — feel like an accessible community.”

Central Street Station will remain open during the transition, Miller said, and Union Pacific will maintain the space until a new tenant has been chosen.