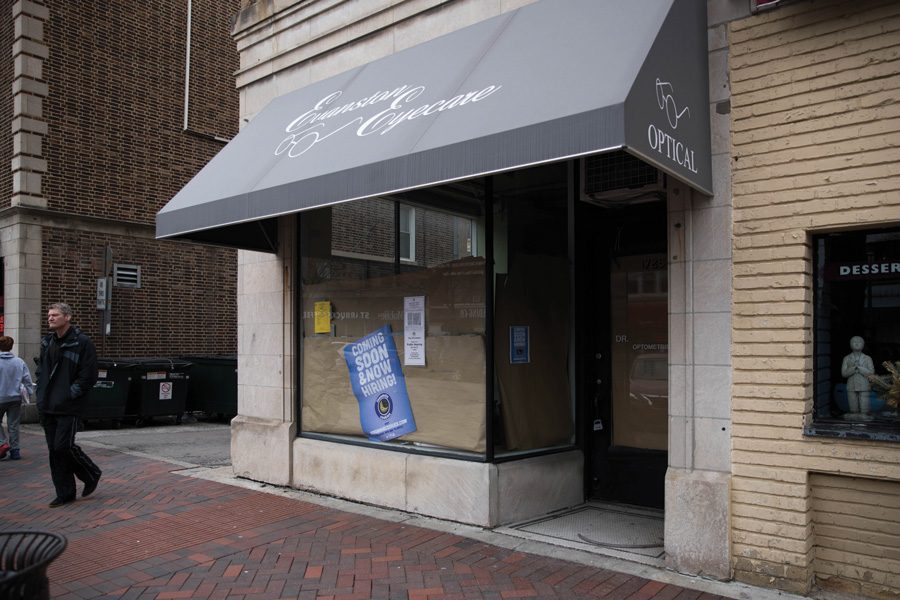 The storefront of a former eyewear shop, 1725 Sherman Ave. Insomnia Cookies plans to open a location in the space later this quarter.

The late-night cravings of ravenous college students will soon be satisfied when Insomnia Cookies opens toward the end of Spring Quarter.

The warm cookie bakery already has four other Chicago-area stores, but none of them deliver to Northwestern’s campus. Courtney Altamura, Insomnia’s senior marketing manager, said the expansion into Evanston — in the former space of an eyewear store at 1725 Sherman Ave. — will allow the business to reach NU students.

Though the proximity to campus was a factor in Insomnia’s choice to open a Sherman Avenue location, the business will also deliver within a one to two mile radius to the surrounding Evanston neighborhood, Altamura said. Insomnia doesn’t yet have a specific opening date.

“We’re excited just to be able to extend our warm, delicious cookies to the Evanston area,” she said.

Altamura said the Evanston community was supportive of the expansion. In February, City Council approved a permit for Insomnia to build a new location and granted the business a special use to remain open until 3 a.m. The building permits were issued last week, Evanston’s interim community development director Scott Mangum said.

“They’re filling a niche and should attract some users there with half their business being deliveries,” Mangum said. “There’s a gap in businesses that are open to serve people who are looking for cookies or other treats so late at night.”

Because Insomnia will be one of only three late-night eateries, Ald. Judy Fiske (1st) said, it would not detract from other local businesses that do not remain open past midnight. Fiske said both the Evanston community and Northwestern students were looking forward to welcoming the bakery to town.

“I reached out to ASG and other Northwestern students asking them what they thought and they were very enthusiastic,” she said.

McCormick sophomore Rika Ko said she thinks Insomnia will be a huge hit, adding she knows people who are already excited about it. Ko said Insomnia would provide student groups with cheap, college-friendly refreshments to attract their peers to meetings.