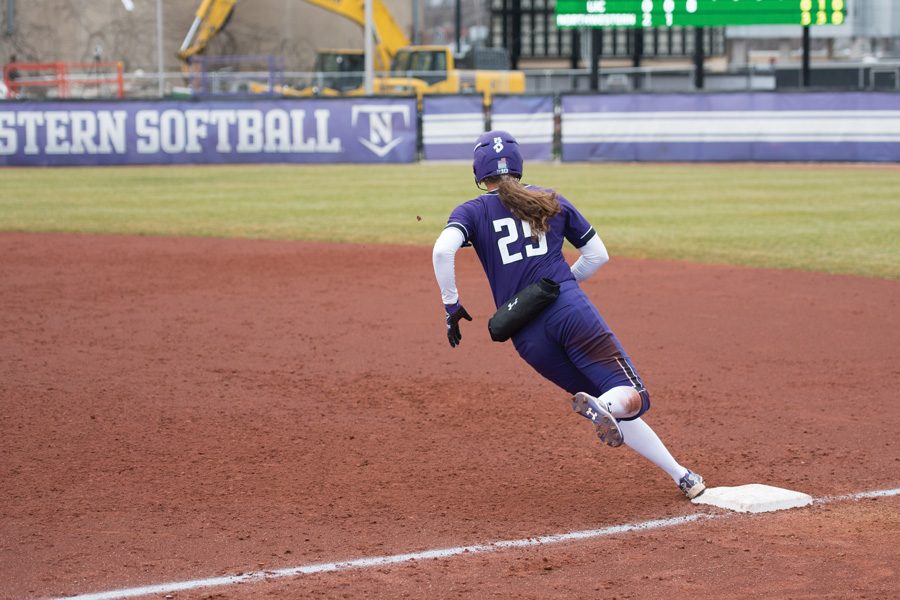 Anna Petersen rounds first base. The senior looks to lead the team’s offense against Maryland this weekend.

Halfway through its regular season, Northwestern is looking to regain lost ground in the Big Ten standings this weekend as the team welcomes Maryland for a three-game series.

After starting the season with one of the country’s toughest non-conference schedules, the Wildcats (13-19, 1-5 Big Ten) racked up a dismal 1-10 record to begin the year. But NU’s struggles didn’t stop with the opening of conference play, as the team started just as slowly, losing five of its six Big Ten games.

The Cats are just one week removed from No. 18 Michigan (26-7-1, 6-0 Big Ten), blanking them in a three-game series in which the team’s offense was nonexistent. The team allowed 20 runs and could only muster eight hits against the Wolverines’ dominant pitchers Megan Betsa and Tera Blanco, who together struck out 22 NU batters in 19 innings.

After a quiet weekend from the offense, senior right fielder Anna Petersen will look to provide a spark to the lineup, after recording two doubles and a walk against Michigan’s aces.

Hitting anywhere between clean-up and seventh in the order, Petersen has been a stalwart of the team’s lineup this season, leading the team in doubles (8), home runs (4), total bases (44) and slugging percentage (.489).

“We got in our own way at the plate,” Petersen said. “This week, we all have small adjustments we can each make. We have to get out of our own heads and swing hard at the pitches we want to hit.”

The Cats’ matchup with Maryland this weekend will mark the first regular season meeting between the teams since 2009 — five years before the Terrapins joined the Big Ten — when NU beat them 7-2.

Maryland ranks last in the Big Ten standings, the only team yet to beat a conference opponent, but Drohan said she does not take that for granted.

“They’ve proven that they can play with some of the best teams in the country with their wins against Florida and Missouri, so we’ve got to bring our game,” she said. “They’re very athletic, so the key for us, on our home field, is to be ready to go at the first pitch and start fast.”

Inclimate weather led to the postponement of the Cats’ Wednesday afternoon doubleheader against Illinois, and even foiled the opener of this weekend’s series. The Terrapins’ flight into Chicago had to be canceled, and as a result, Friday’s game will instead be played as the first game of a doubleheader Saturday at Sharon J. Drysdale Field.