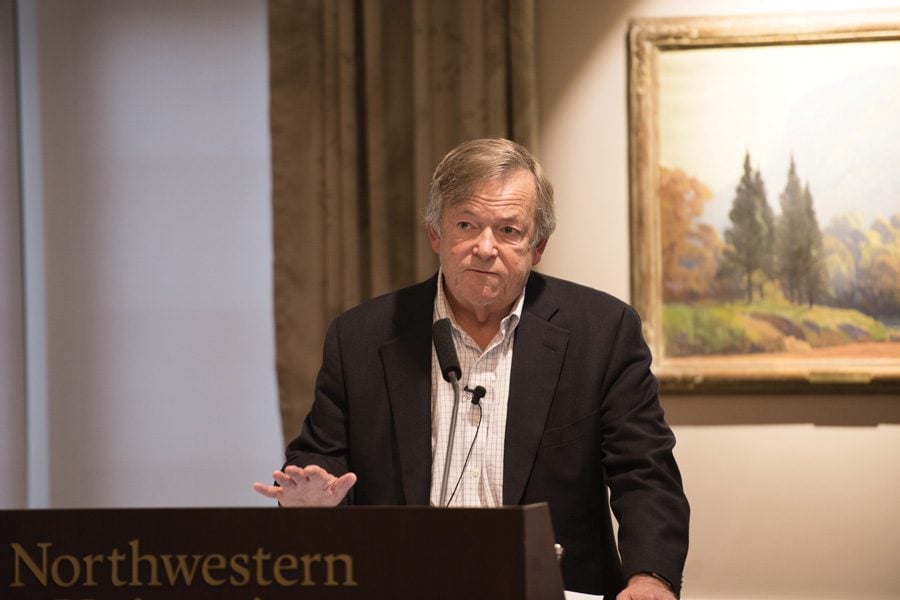 President of the Spencer Foundation Michael McPherson speaks as a guest speaker at Faculty Senate on Wednesday. During Senate, a resolution was passed that would expedite the process of including librarians in Faculty Senate.

Faculty Senate passed a resolution Wednesday to expedite the process of having librarians represented in Senate.

The resolution is part of an ongoing conversation to include librarians as voting members of Senate. Senate president and religious studies Prof. Laurie Zoloth said senators have been working on this issue for the past three years.

Zoloth said the main concern with admitting librarians is the question of whether they fall under the definition of faculty.

“It’s been difficult to find the proper language,” she said. “The trick seems to be that the formational bylaws of the University do not define librarians as faculty. That’s the problem. And hence the Faculty Senate and faculty assembly do not include them, technically.”

However, Zoloth said there are many reasons why librarians see themselves as faculty members. For example, she said, they have doctorates, they assist students and they run classes. Currently, librarians are present in Senate as non-voting participants and are looking for further representation, she said.

Faculty Handbook Committee Chair and Feinberg Prof. Lois Hedman said defining faculty is difficult because of how “unorganized” the system is. Confusion is caused by the lack of a set definition of what a faculty member is, she said.

“I’ve seen descriptions of faculty,” she said. “I’ve seen its listing of different appointments and titles, and every time I see that, I see a different list with different descriptions, and that’s part of one fundamental problem.”

Roxanne Sellberg, associate university librarian for research and administrative strategies, said the long process of including librarians in Senate is less of an issue with the administration and more of a problem with the wording of the University’s statutes.

“The University and administration is not against librarian faculty in any way,” Sellberg said.
“The problem they are wrestling with is … particular wording in the statutes of the University, which have a list of things that are included and excluded in the term faculty.”

Zoloth said if the Office of the Provost decides within the next month that librarians can be included as faculty, Senate will have a second reading of the resolution in May before a final vote.

Meanwhile, Senate invited Michael McPherson, president of the Spencer Foundation, to talk about the state of higher education in the nation. He emphasized that despite the rise of technology and engineering-based studies, humanities are still important fields that need to be preserved.

McPherson’s visit is part of a series of speakers Faculty Senate introduces every month to gain more insight about higher education.

“In order for the members of Faculty Senate to become leaders on campus … it’s important to learn from experts about how to be good academic citizens,” Zoloth said.