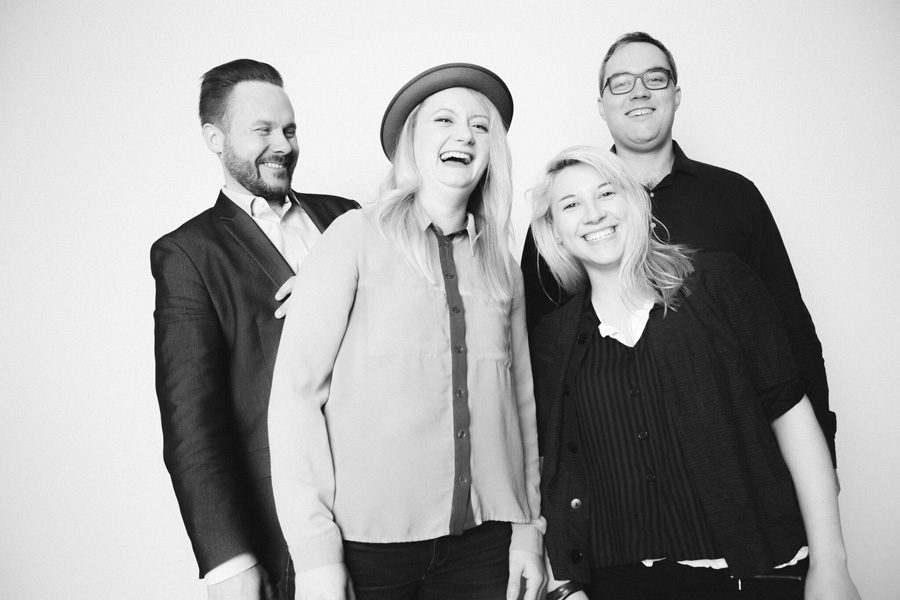 Left to right: Doyle Armbrust, Clara Lyon, Maeve Feinberg, Russell Rolen. The four members of Spektral Quartet are coming to NU for a concert this Sunday. The group’s album “Serious Business” was nominated for a Grammy this year.

The Grammy-nominated Spektral Quartet will perform the works of eight Bienen students in a concert this Sunday.

With a repertoire list spanning a wide variety of genres, centuries and styles, Spektral Quartet was formed more than seven years ago and seeks to “pursue a conversation” between modern and classical music, said Doyle Armbrust (Bienen ’00), the violist and group representative.

“All of our concerts are really intended to be really inviting and welcoming to newcomers and hardcore classical fans,” Armbrust said. “Stylistically we’re pretty all over the map … there’s so many different sorts of flavors of (music), and we have a wide appetite for I’d say most of it.”

Liza Sobel, one of the featured composers, said this openness is one of the group’s main assets that differentiates it from other string quartets. Spektral Quartet, she said, doesn’t limit itself to one style.

“If it’s something we’re making not the most traditional … I think other string quartets maybe would shy away from that,” the second-year doctoral student said. “Spektral would just jump in and say great … let me figure out how to play this.”

Based in Chicago, the quartet has had strong ties to Northwestern since its creation, with two of its members being NU alumni. The quartet makes student composer concerts a priority, and saw this concert as an opportunity to get introduced to the “next generation” of NU composers, Armbrust said.

“There are so many people out there with so much creativity writing all these phenomenal pieces,” he said. “It’s really difficult for them to find groups to get their works played just because there is so much of it.”

Each year, the composition department assigns students to various performance groups and soloists, depending on their preferences, said Hans Thomalla, professor of composition and director of the Institute for New Music at Bienen.

Thomalla said he wanted to bring Spektral to NU because the group is one of the leading new music string quartets in the country and has a diverse repertoire.

“A string quartet is such a traditional and classical genre and we have now a group here in Chicago that is playing that repertoire … but also promotes new music and works with young composers,” he said.

Each composer wrote a piece between seven to 10 minutes long that they worked on for several months prior to the concert, said Bienen senior Austin Busch, a featured composer.

After seeing the quartet perform over the summer, Busch said he noticed Spektral had a rhythmic focus in some of the music it chose. For his piece, he transcribed audio of drum loops to pitches in the string quartet, wanting to use his percussion background to produce a piece that also played to Spektral’s wide range of musical styles.

“If I hand (my piece) to a group that only plays Beethoven quartets, they can play it … but they’re not going to feel it in the same way,” he said.

Ethan Boxley, a Bienen junior, said he tried to combine older styles of music with 20th century techniques in his composition. Using computer software, he studied spectrographs of water recordings to write his piece.

“There’s a ton of rhythms that you can get from transcribing water,” Boxley said. “It’s just free rhythms and notes that are totally cool and so I wanted to … use those as the texture in the composition.”

Sobel, the second-year doctoral student, said she’s looking forward to hearing the diverse compositions of the students at the concert.

“(With) string quartets, you can imagine, ‘Oh everything’s going to sound the same,’ but I think it’ll be the opposite,” she said. “The composers each have such different styles so it’ll be a huge variety of pieces with the same four instruments.”