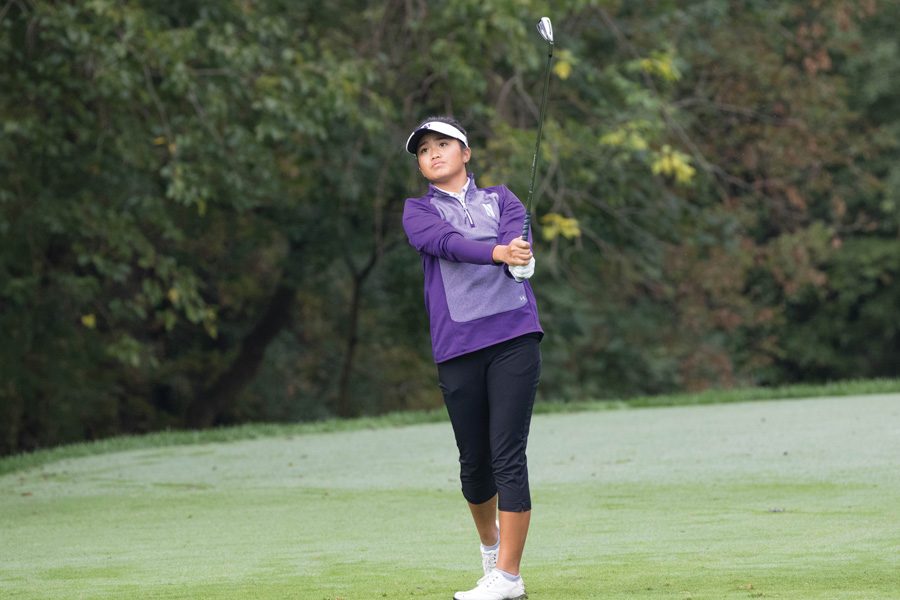 Stephanie Lau watches her ball flight. The sophomore was one of two NU golfers to win Big Ten Golfer of the Week.

Sophomore Stephanie Lau and junior Dylan Wu were each named Big Ten Golfers of the Week, the conference announced Wednesday.

Lau, the 2016 Big Ten Freshman of the Year, earned her award after helping the Wildcats split a doubleheader with Duke on Sunday. She won both of her matches that day, defeating 2016 Olympian Leona Maguire and reigning NCAA champion Virginia Elena Carta.

This is the second time Lau has won the award, after previously earning it in October 2015. She is the third NU women’s golfer to win the award this season, along with senior Kacie Komoto and junior Hannah Kim. On the men’s side, Wu is the fifth Cat to win the award, tied with Michigan for the most in the conference.

Wu’s recognition comes a day after he won the Redhawk Invitational with his best performance for NU, shooting 7-under-par at Chamber’s Bay, site of the 2015 U.S. Open.

“Really happy for Dylan, to get his win,” coach David Inglis said after his win. “It’s never easy playing with the lead and having the pressure, but he responded really well and he ended up winning by one with a birdie on the last hole.”

This is the third time Wu has won this award. Heading into this week’s tournament, he was ranked No. 24 in the country, according to Golfweek. He currently leads NU in rounds under par, stroke average and top-five finishes.