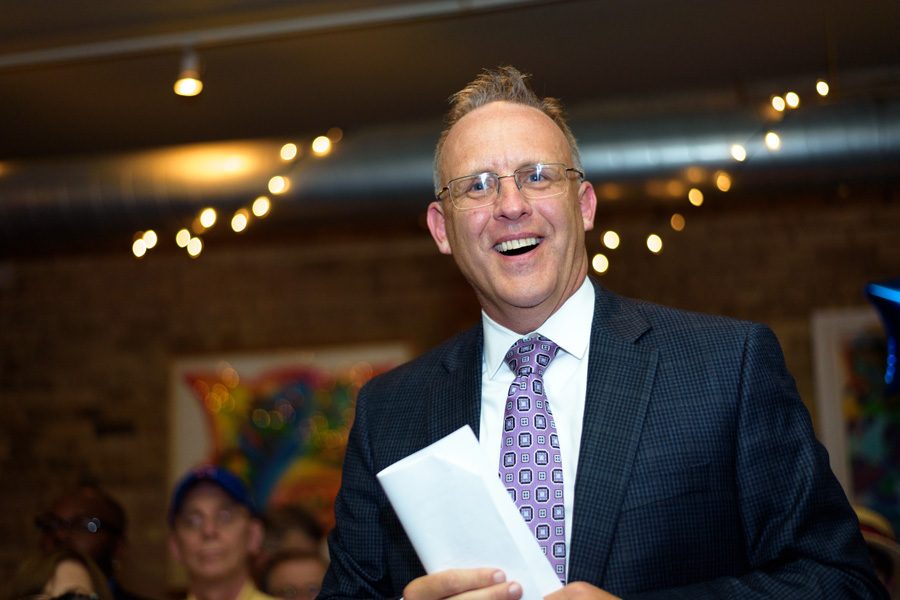 Businessman Steve Hagerty addresses supporters after claiming victory in the Evanston mayoral race. As of early Wednesday morning, Hagerty received about 160 more votes than Ald. Mark Tendam (6th), who did not concede defeat.

As of early Wednesday morning, businessman Steve Hagerty had won the most votes in Evanston’s mayoral race, capping off a roughly six-month long season that included a rare primary and a slew of contentious legal challenges.

Hagerty, a first-time politician who pledged to build on “generations” of work, gained about 50.5 percent of the vote and was narrowly trailed by Ald. Mark Tendam (6th), who received roughly 49.5 percent. Hagerty bested Tendam by just 159 votes.

Tendam said he would not concede Tuesday night, choosing to play a “guessing game” and wait until all remaining mail ballots are counted. In Evanston, at least 17,827 residents voted in the election, about 7,450 more than in 2009, the last contested mayoral election.

“You can’t concede, I don’t think that’s an option,” Tendam said. “There’s a lot of ballots that could still be out there.”

Cook County clerk communications director Nick Shields told The Daily in an email that 1,977 mail ballots were requested by Evanston residents. As of about 7:30 a.m. on Tuesday, a little more than 1,000 of those had been returned to the clerk’s office, Shields said.

So long as outstanding ballots were postmarked by April 4, Shields said they would be counted in the final tally, which will occur within roughly three weeks.

Evanston Clerk Rodney Greene could not be reached for comment.

Hagerty said his opponent made a “prudent call” in not conceding, acknowledging that some mail ballots had not yet been counted. Nevertheless, he said the presumptive win felt “wonderful” and that he never believed the election would be a “blowout.”

“I’m a novice, I’ve never run for political office before; most people that run their first time lose,” Hagerty said. “It feels wonderful to be the next mayor of one of the finest urban ring cities in the country.”

“The role of the mayor is to balance lots of competing demands,” Hagerty told The Daily in February. “Strike that balance between smart and sensible economic development and not losing the character of the city. Between keeping all of our neighborhoods safe and not infringing on people’s rights.”

What should have been the end of an especially tense election cycle — marred by numerous legal objections and confusing paperwork — has ended in uncertainty.

It was the second test for the two candidates. In February, Evanston held its first primary election in recent memory, which narrowed the mayoral race down from five candidates to two. In that primary, Hagerty won roughly 44 percent of the vote, with Tendam earning about 20 percent.

Tendam said he was disappointed by the results and attributed the slim margin in part to less funding.

“With a fraction of what (Hagerty) spent we were able to be competitive and come up almost neck and neck,” he said. “It’s certainly a win for us either way. Evanston listened to someone with more experience and more or less half of the voters weren’t swayed by the amount of money.”

Supporters of Hagerty gathered at Prairie Moon, 1502 Sherman Ave., to watch results come in and celebrate their victory. Sean van Dril, a McCormick senior who helped out on the campaign, said Hagerty was committed to listening to students. Van Dril pointed to the candidate’s promise to meet with students quarterly as evidence.

“He’s the best candidate to start bridging the gap between Northwestern students and Evanston municipal government,” he said. “Pragmatically, he’s got the best skills to carry out effective government.”

Hagerty, a lifelong emergency consultant, moved to Evanston in 1999 so his wife, Lisa Altenbernd, could attend graduate school at Northwestern’s School of Education and Social Policy. After settling into the community, he founded a local firm that currently employs more than 100 people across the country.

In February, Hagerty told The Daily he wanted to move away from his business and focus on helping the community. Since he began considering a mayoral bid two years ago, Hagerty said he has built a strong management team to run day-to-day operations.

“I can continue to have a part-time role here with my company, but it affords me the flexibility that I need to help the city,” Hagerty told The Daily in February.

The new mayor will assume his role on May 8, city manager Wally Bobkiewicz said.

This story was updated at 2:30 a.m. with additional information.