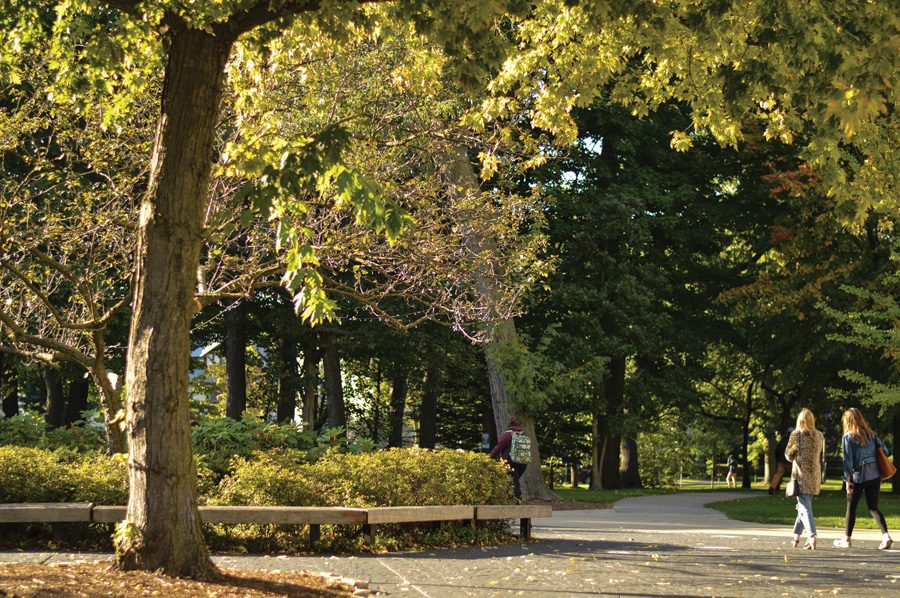 A tree that grows by The Rock in November. After President Donald Trump’s recent executive order, Evanston environmentalists emphasized their commitment to fighting climate change at a local level.

Kumar Jensen, the city’s environmental project coordinator, said Mayor Elizabeth Tisdahl will soon add Evanston’s name to a list of cities that have co-signed a letter to Trump objecting his new executive order. The letter was organized by the Mayors National Climate Action Agenda — an initiative that purports to represent more than 42 million Americans in 75 cities — and highlights climate change as the biggest challenge facing the nation.

Jensen said he doesn’t believe the order will affect Evanston as much as residents of other states, citing a recent Illinois bill that provides many energy-related jobs. Nevertheless, he said it was important for the city to take steps to complete its next climate action plan, following an achieved 2012 goal to reduce emissions by 13 percent.

“We’re going to continue on in our own commitment to fighting climate change and continuing to uphold and abide by the standards set by other levels of government as they regard to environmental policy,” Jensen said.

On August 3, 2015, former president Barack Obama and the Environmental Protection Agency announced the formation of the Clean Power Plan, which took a major step toward reducing carbon emission from power plants. The plan was the first to establish standards for regulating those emissions and works on “laying the foundation” to tackle the long-term threat of climate change.

The executive order signed by Trump on March 28 is designed to curtail governmental regulations on the environment while prioritizing American job growth. Trump has vowed to put miners back to work and centered much of his presidential campaign on bringing back domestic jobs to revitalize the economy.

“The Environmental Protection (Agency), what they do is a disgrace,” Trump said on Fox News in 2015. “Every week they come out with new regulations … We’ll be fine with the environment. We can leave a little bit, but you can’t destroy businesses.”

Jonathan Nieuwsma, president of Citizens’ Greener Evanston, said he wasn’t surprised with the executive order, as it was “par for the course” with Trump’s cabinet selections, specifically with the head of the EPA. He said since he expected the order, he wasn’t angry, but rather re-energized to act locally.

One of the local measures already taken in Evanston to promote cleaner energy is the Community Choice Electricity Aggregation, which allows the city to bundle together residential and commercial retail electric accounts. It also permits Evanston to seek proposals for cleaner, potentially cheaper sources of power, according to the city website.

“We’re going to continue to do the good work we do here locally and hopefully … we’ll have Evanston to look to as a national example,” Nieuwsma said.