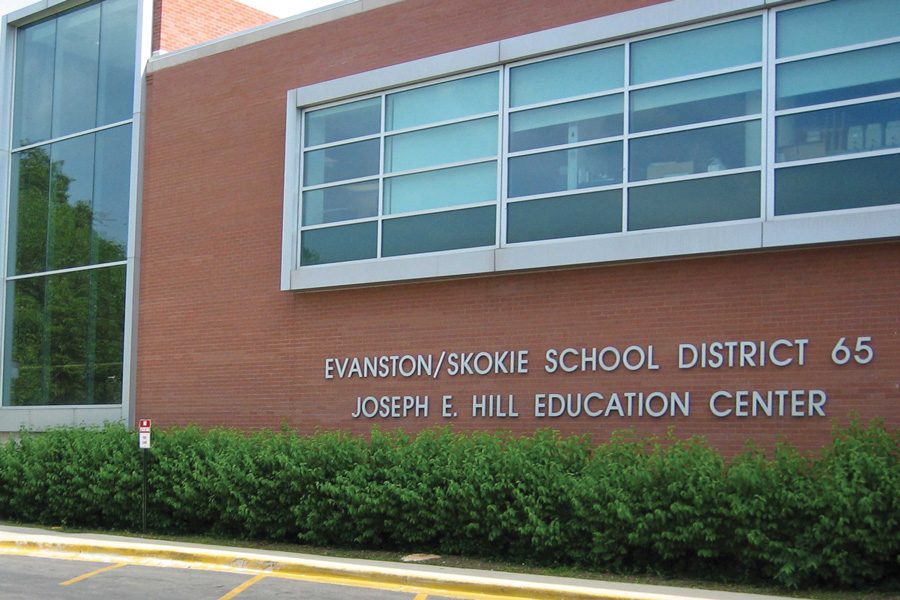 The Joseph E. Hill Early Childhood Education Center holds the offices for Evanston/Skokie School District 65. There are five District 65 school board candidates running for four-year terms and one running unopposed for a two-year term.

Five candidates will compete for four positions on the Evanston/Skokie School District 65 board in Tuesday’s election, forcing voters to cut one from the pack.

In addition, a sixth candidate is running unopposed for a two-year term.

Of the five candidates running for four-year terms, two are up for re-election and three are seeking a first-time spot on the board. The new board will deal with a number of major issues, including a potential budget deficit and large racial achievement gaps.

Candance Chow, who has been District 65 board president since 2013, said she considers it a “real honor to serve.”

Her experience leading the district through financial challenges — as evidenced by the upcoming property tax referendum — and deep-rooted relationships with District 65’s diverse families differentiates her from other candidates, she said.

Chow said she hopes to continue promoting academic success for all children, create financial and equitable accountability for the school board, and establish partnerships with nonprofits to support families and school staff.

Should she be re-elected, Chow said she would ensure the board remains particularly committed to eliminating the achievement gap.

“My professional experience has been in making systemic change happen, which is what we have to do regarding equity,” Chow said. “We have to transform the institution of education within the community to reflect the equity agenda.”

Northwestern alumna Lindsay Cohen (Weinberg ’01) said she decided to get involved with the school board after hearing about cuts being made in the district.

Cohen, who has a second-grader in a District 65 school, said she is running to “get a seat at the table.” She said her biggest priorities, if elected, would be to address the achievement gap, deal with the district’s finances and increase technology education.

“Technology is the great equalizer among kids,” Cohen said. “We need to do a better job in Evanston of setting our kids up for success for high school, college and beyond.”

Cohen said her background in analytics and entrepreneurship would help her “fill a gap” on the school board in providing advice on how best to evaluate the district’s budget and academic achievement statistics.

Joseph Hailpern, an elementary school principal who started his teaching career in a District 65 school, said he feels his teaching experience provides him with unique qualifications to serve on the board.

He said meeting the basic needs of children and teachers should be an imperative for the school board, to create equity and access. He added that he hopes to give all students an “equal shot” at their education, and to ensure they see themselves represented in the curriculum and literature used.

Hailpern said his campaign is focused on fiscal responsibility and meeting funding needs, especially in light of the upcoming referendum. He said he hopes to see long-term sustainability in the district and to make sure the “culture and climate” of the schools are open and inclusive to all.

Suni Kartha (Weinberg ’97), an attorney with two children in District 65, said she first joined the school board in 2013 to eradicate racial disparities. Students in the district can have different educational experiences that correlate in part to race, she said.

In her re-election campaign, Kartha said she has focused on three things: equity, inclusivity and transparency.

“We need to do a better decision reaching out to those who traditionally have not made their voices heard,” she said. “To make sure that, as we make decisions, we are not disproportionately affecting groups that have already been marginalized.”

Kartha said because the board will have new members, it would benefit from keeping an experienced voice. She added that in four years on the board, she has helped address major issues like finance and equity, and would keep the district “moving forward in a positive direction.”

Nicholas Korzeniowski, who is running for the first time, said he has experience managing the technology budgets of five different public school boards.

He said technology should be integrated into every aspect of a student’s daily life. In addition, Korzeniowski supports using technology to close the district-wide achievement gap, including software to bridge the literacy gaps of students when they first enter school.

Korzeniowski said such software can provide ESL students with the curricular flexibility they need to catch up with their peers.

“Because we see the achievement gap at the moment students are entering the district, one of the ways we can ameliorate that is through literacy,” he said. “There are a lot of good literacy curricular software products that can be targeted to students who need literacy help.”

In her more than 15 years of experience in education as a former teacher, Anya Tanyavutti has emphasized the importance of equity, inclusivity and transparency.

Tanyavutti — who is running unopposed for a two-year term after replacing a former board member — said she believes in fostering a safe educational environment in which children can learn to appreciate diversity.

To achieve this goal, Tanyavutti said she advocates for both excellent academic and emotional support. Her work has pushed her to explore various ways to evaluate the emotional well-being of students.

As a current member of the board, Tanyavutti said she has helped increase transparency of the board’s work to stakeholders. Through this transparency, she said she hopes to increase family engagement and further promote inclusivity within the Evanston community. She has also pushed for a two-year staff training program on the issues of marginalization.

“(My work) is about providing all stakeholders within our public institution with all of the tools they need to benefit from diversity,” Tanyavutti said.

Early voting has been open since March 20 and will close on Monday ahead of election day on Tuesday.