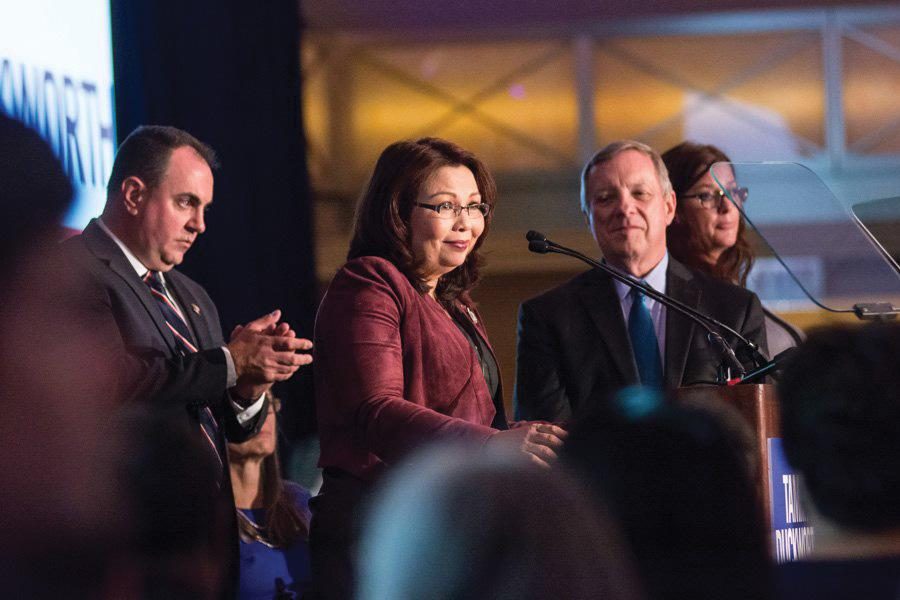 Sen. Dick Durbin (D-Ill) looks on as Rep. Tammy Duckworth (D-Ill) accepts victory in her race for the Senate. A Monday petition calls on the two senators to reject President Donald Trump’s proposed budget for the Department of Homeland Security.

Activists delivered a petition Monday afternoon to the local offices of U.S. Sens. Dick Durbin (D-Ill.) and Tammy Duckworth (D-Ill.) that calls on them to reject President Donald Trump’s proposed budget for the Department of Homeland Security.

Activists from two immigrant rights organizations, United We Dream and Justice for Our Neighbors, delivered the petition with more than 40,000 signatures to the senators. The petition states Trump’s proposed $3 billion budget would fund executive orders that “terrorize immigrants.”

Trump’s proposed budget allocates $1.5 billion to help pay for the construction of new immigrant detention centers and $1.4 billion toward building a border wall between Mexico and the United States, according to the petition.

More than $300 million would also go toward hiring 500 additional border patrol agents and 1,000 Immigration and Customs Enforcement officials. Money allocated in the budget would also help to house 45,000 people in “detention camps” every day, according to the petition.

“Examples of abuses by agents with the Immigration and Customs Enforcement Agency and Customs and Border Patrol have been well documented and it is to these agencies that Trump has promised more taxpayer cash and less oversight,” the petition read.

Trump signed an executive order in January that outlined his intentions to build a wall along the U.S.-Mexico border, ordered the immediate detainment and deportation of residents without documentation and authorized the hiring of 5,000 border patrol agents.

At the end of January, Trump also issued an executive order that barred citizens of seven Muslim-majority nations from entering the United States for 90 days, among other limitations on immigration. That order was quickly stricken down in federal court the next month, and a revised version was also stricken down in March.

Trump defended his policies and orders on immigration during a news conference in February with Canadian prime minister Justin Trudeau.

“I said we will get the criminals out — the drug lords, the gang members — we’re getting them out,” Trump said during the news conference. “I’m just doing what I said I would do.”

Durbin has spoken out against Trump’s immigration executive orders in the past few months.

“Building a wall on our border and fear in our hearts will not move this nation forward,” Durbin said in a January news release.

Duckworth has also decried the executive orders on immigration.

“Hard-working Americans should not be forced to pay billions of dollars for an ineffective border wall as life-saving services are being cut and vital programs are being eliminated,” Duckworth said in a March news release. “The President’s budget would weaken our nation and hurt the people of Illinois. If enacted, it will cost the American people dearly.”