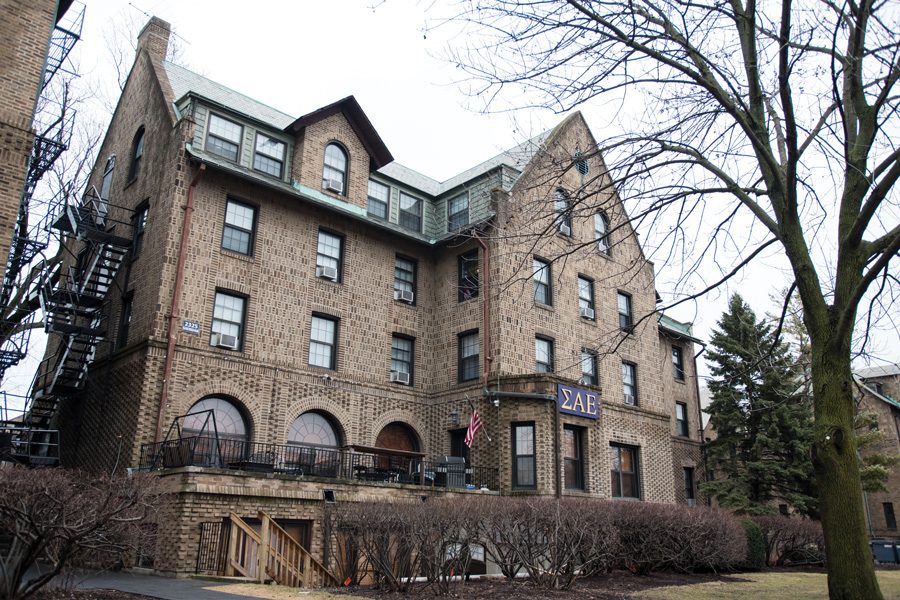 Sigma Alpha Epsilon fraternity’s house on Northwestern’s campus. The University announced on March 30 that no disciplinary action will be taken at this time against SAE and another unnamed fraternity following reports of alleged sexual assaults.

Associated Student Government President Christina Cilento said she had a feeling an email from Patricia Telles-Irvin, vice president for student affairs, would contain news that would upset her.

“It’s disappointing to me that I’m not that surprised,” the SESP senior said. “I’m just struggling with how to react to it, or what steps we can actually take that would reassure students that this is a safe campus environment.”

Telles-Irvin announced in an email to students on March 30 that no disciplinary action would be taken against Sigma Alpha Epsilon fraternity and another, unnamed fraternity regarding reports of multiple alleged sexual assaults and druggings at the two houses.

Cilento said many students she talked to thought inaction in the face of sexual assault and drugging allegations was unacceptable.

“Students needed to see some sort of disciplinary action come out of this to be reassured that campus is a safe space for them and that we support survivors here,” Cilento said.

Wang helped organize the February “Stand with Survivors: March Down Sheridan” demonstration, where students demanded the removal of NU’s SAE chapter and marched from the SAE on-campus fraternity house down Sheridan Road to the fraternity’s national headquarters. She said many students showed their support for survivors in the time surrounding the march, but in the weeks that followed, it seemed like many students had abandoned the cause.

“My first reaction was like, ‘Of course. Of course they’re not doing anything because that is honestly just so Northwestern,’” Wang said. “Survivors on this campus deserve more … The University was really just letting us down.”

Kevin Pu, president of Men Against Rape and Sexual Assault, said the closing of the investigations could promote further activism, showing students that work must still be done to improve safety.

Pu, a Weinberg junior, said though students do not know the full details of the investigation, they should still have some agency to promote greater respect and accountability.

“One of the main things that people sometimes forget is that these are students hurting other students,” Pu said. “And that’s both terrifying but also that means that we are most empowered to change that.”

Some students asked why there wasn’t another protest following the email announcing the end of the investigations, Wang said. But organizing is time-consuming, she said, and it can be difficult for survivors to repeat their stories.

Instead, Wang said it is easy to lose hope without first taking time to recharge.

“When the University so fundamentally lets me down, it makes me think, ‘Why would I put more emotional energy into this right now when time after time the results tell me that this is not productive, it’s not working, the University’s not taking me seriously?’” Wang said. “Yes, give me a couple more weeks, and I will be down to take action again.”