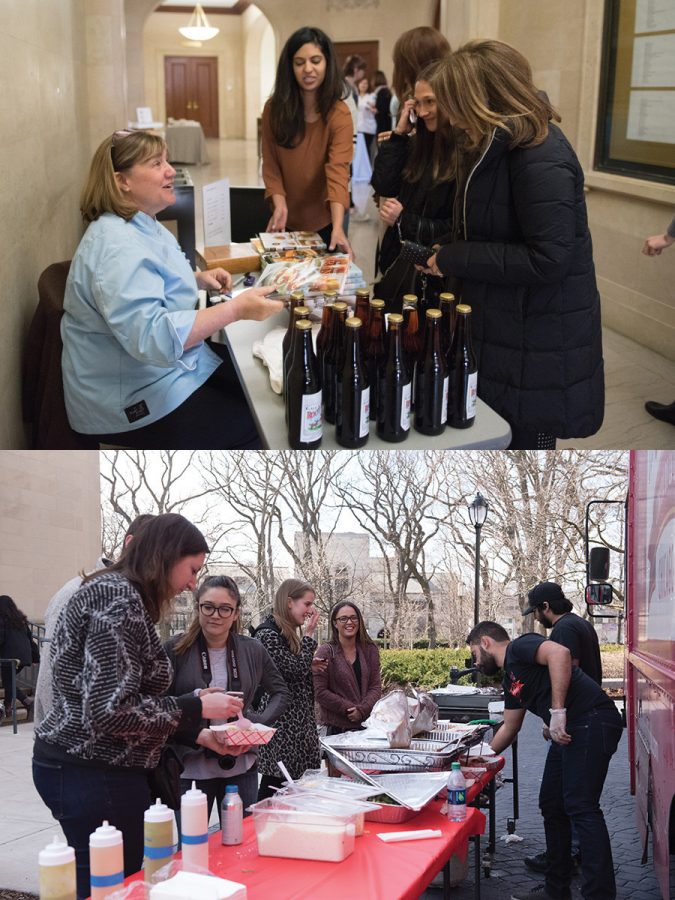 (Top) “Sweet Dreams” host and renowned pastry chef Gale Gand promotes her books and own brand of root beer to attendees of the Sugar and Spice Summit on Saturday at Harris Hall. (Bottom) La Cocinita employees sell food from a food truck to summit attendees outside Harris Hall. The University’s first food summit brought prominent women in the culinary world to campus to discuss their experiences in the food industry.

Complete with chocolate samples, root beer and tacos, Harris Hall was filled with food Saturday as Northwestern held an inaugural event celebrating opportunities for women in the culinary industry.

Panels such as “A Woman’s Place is in the Kitchen” or “Not Your Grandma’s Food Magazine” were used to highlight the variety of options available in the food industry, said event organizer Lauren Goldstein, director of partnerships and special projects for NU’s chapter of Spoon University. The purpose of the event was “to do something to empower women in the food industry,” the Communication junior said.

Goldstein invited well-known TV personalities for the panels, such as Food Network Star winner Aarti Sequeira (Medill ’00) and Food Network’s “Sweet Dreams” host and renowned pastry chef, Gale Gand. Many of the speakers came from across the country to participate in the event, Goldstein said, representing a wide variety of professions in the culinary world.

“There are so many different ways to work in the food industry,” Goldstein said. “You can love food without being able to cook it.”

Sequeira told The Daily about her decision to enter the food industry after having worked at CNN. Her love for writing sparked a desire to create new things, launching a culinary career. She has since hosted and participated in multiple shows for the Food Network.

In the panel “A Woman’s Place is in the Kitchen,” Gand talked about the difficulties she had entering the food industry as a woman. Having no female chefs to look up to at the time, she said she stayed in the industry solely because of her passion for the craft.

“It was like speaking a language you were fluent in and I don’t remember ever learning it,” Gand told The Daily. “It picked me, I didn’t pick it.”

Chefs Mindy Segal and Christine Cikowski, who were on the same panel as Gand, credited her for being a female role model for them when they were entering the industry.

Also present at the summit was Mackenzie Barth (Communication ’13), co-founder and CEO of Spoon University. Founded at NU, Spoon University is a food publication targeted toward millennials, and it now has about 200 chapters.