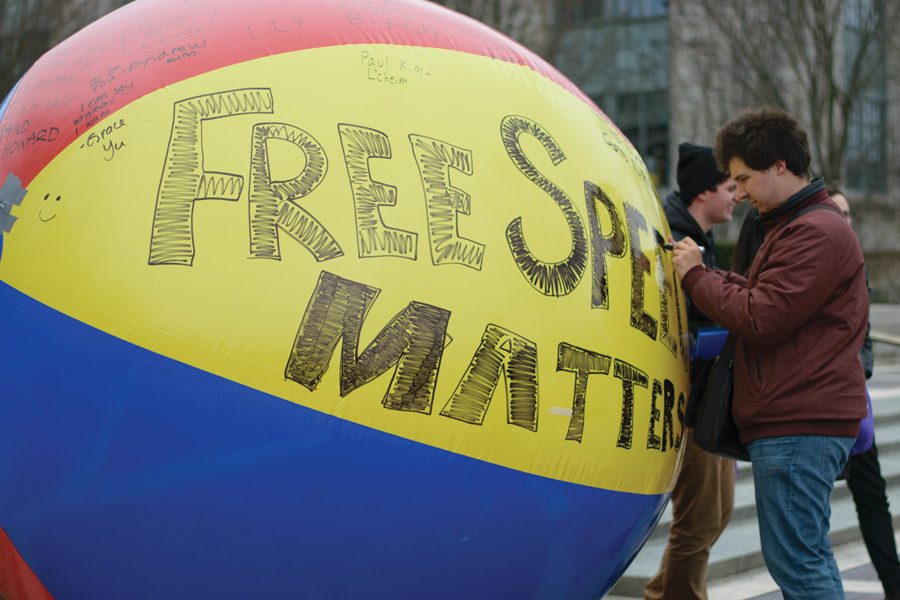 A passerby writes on the “free speech ball” outside of the Technological Institute. A group affiliated with Young Americans for Liberty used the large beach ball to support free speech on Friday.

Armed with a giant colorful beach ball, a group of Northwestern students supported free speech in front of the Technological Institute on Friday.

The students are affiliated with Young Americans for Liberty, a national organization that advocates for rights guaranteed by the Constitution. They used the beach ball as a “free speech ball” and encouraged passersby to exercise their First Amendment rights by writing anything they wanted on the ball. The group, which has about 10 members, inflated the ball on Friday as part of their protest against a University policy on flyering and tabling, Weinberg junior Alyssa Liu, the group’s co-president, said.

The organization’s website recommends student representatives use a beach ball because it does not require a permit to be used on college campuses, since it’s not a standing structure.

Liu said using the beach ball is a “fun and quirky” way to start a community dialogue about free speech.

“It’s a very approachable way to talk about this issue, like what do we mean by free speech, and just making it easier for people to engage in that conversation,” she said.

According to campus publicity policies and procedures, “The distribution of leaflets and hand bills at any campus location must be approved by Norris Event Management.”

Liu said she believes this policy is a violation of free speech. The group spent several hours outside Tech collecting signatures and informing others about the issue, she said.

Jeremy Schenk, the executive director of Norris University Center, said Norris only approves the location where student organizations distribute materials, but does not restrict the content of the materials. The University “encourages free speech” and the policy is in place for logistical reasons, he said.

“Different departments and academic buildings may not allow for people to hand out in the lobbies, so you have to work with the owner of the building to know where and how,” Schenk said. “We literally just schedule the table. We don’t look at their materials that they’re handing out and approve it.”

This wasn’t the first time the Free Speech Ball appeared on campus. Nathan Berning, Illinois state chair of YAL, said the organization held a previous protest on March 3. He said NU’s demonstrations are among others happening nationwide.

The organization plans to hold more demonstrations and meetings to educate students about their rights, and to facilitate more conversations about these issues on campus, Liu said.

The national organization is devoted to educating activists to protect the freedom and liberties of individuals, according to the organization’s website. This includes challenging policies that go against these liberties, Berning said.

Berning said trying to monitor every type of speech on campus is impossible, and that free speech needs to be protected to ensure all people are able to make their voice heard.