Softball: Wildcats shut down at Michigan 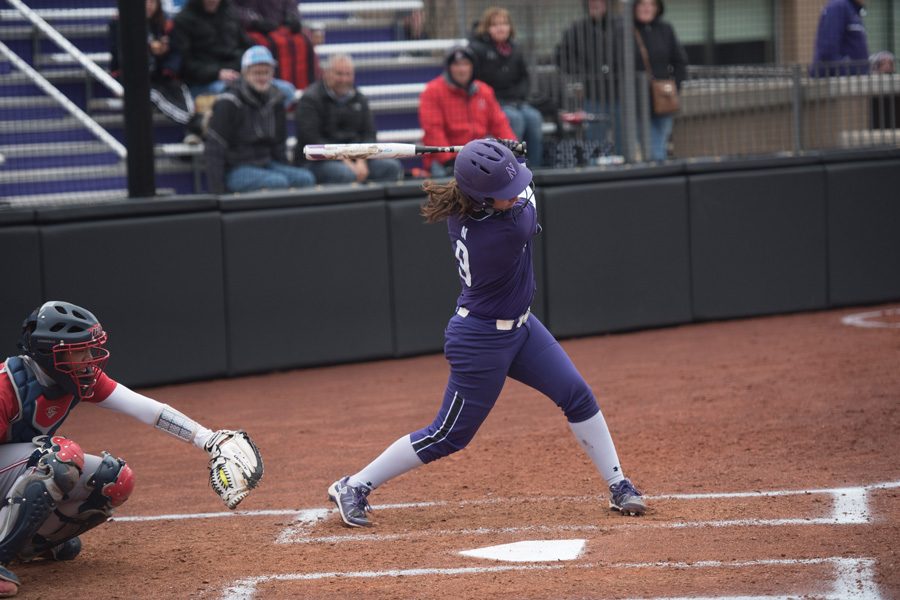 Lily Novak swings through the ball. The sophomore infielder and the Wildcats were shut out three times in weekend losses.

Northwestern put up several big numbers offensively in its first 29 games — 11 runs against North Carolina State, 10 against Long Beach State and 10 more against Illinois-Chicago — and was shut out just three times.

Then came this weekend, and the Wildcats’ bats went silent.

The Cats recorded just eight hits across the weekend — far fewer than the 20 runs the Wolverines plated. NU struggled against both Michigan aces, failing to break through against either Megan Betsa or Tera Blanco.

Betsa tallied an impressive 10 strikeouts over just 5 innings Friday, a 10-0 Wolverines win truncated due to the run rule. Blanco, meanwhile, pitched to contact in Saturday’s 6-0 victory, striking out only three but throwing an economical 98 pitches over 7 innings.

Betsa returned to the circle Sunday, retiring 10 straight batters at one point. Both Betsa and Blanco displayed excellent command across the weekend, as neither issued a single walk.

The weekend continued an impressive stretch for Michigan, which has not allowed a run in seven games.

“They’re definitely very good pitchers,” junior outfielder Sabrina Rabin said of Betsa and Blanco. “But we just need to focus on what we’re doing, instead of so much what they’re going to do. … We just didn’t put together hits.”

The Cats put runners in scoring position in each game, but failed to bring any runs across the plate. The Wolverines had no issues doing so, roughing up several NU pitchers. Sophomore Kaley Winegarner allowed 7 earned runs in 3 innings Friday, and senior Nicole Bond gave up 6 runs Saturday.

The pitching struggles continued a recent trend for the Cats. No. 22 Wisconsin scored 14 and seven runs, respectively, in wins last weekend, and UIC put up a big inning late in Wednesday’s crosstown contest.

“We gave them a couple of extra outs defensively in some innings,” Drohan said. “The free bases came back to get us. … Our pitchers are continuing to work, and putting us in a position to win a game.”

Still, NU snuck out a win against the Badgers and had a large enough lead to withstand the Flames’ late charge. That was not the case in Ann Arbor, where the Cats were outclassed all weekend.

The sweep leaves NU rooted near the cellar of the Big Ten. Though the conference season is young and the Cats opened against a pair of difficult opponents, NU has significant ground to make up. Its schedule gets only marginally easier with Wednesday’s doubleheader against Illinois.

Still, the Cats said they would rebound quickly. Rabin mentioned the importance of Tuesday’s practice — NU’s lone one before the Fighting Illini come to Evanston — and Winegarner stressed mental fortitude.

“I don’t really think that’s a big issue,” she said of the turnaround. “Games happen, and you just have to shake it off and realize that tomorrow’s a new day. Just how it is in the game, where you take it pitch by pitch, (it is important) taking it game by game.”