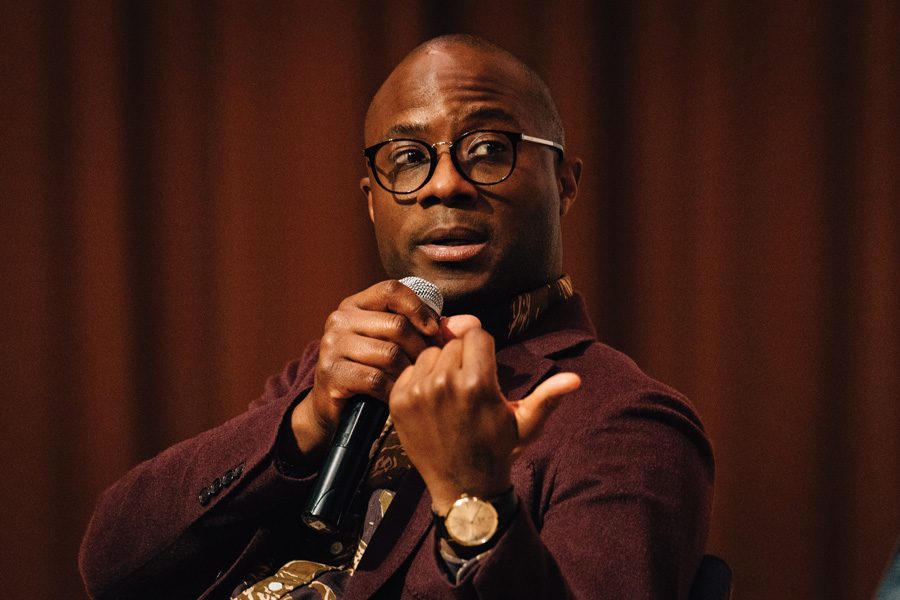 “Moonlight” director Barry Jenkins speaks at Ryan Auditorium in the Technological Institute on Saturday. The Academy Award-winning director discussed the inspiration behind the film as well as issues of representation.

“If you read anything about this film, you would know that Barry Jenkins is straight and Tarell McCraney is gay,” Jenkins said to a Northwestern audience Saturday night. “And, I feel there’s a ceiling of how far empathy can get you as an artist … there’s a ceiling for how far these good intentions can get you, which is why I wanted a first-person perspective on the piece. I wanted Tarell to do the writing.”

Jenkins spoke at NU during an event co-sponsored by A&O Productions, Contemporary Thought Speaker Series, Rainbow Alliance and Inspire Media. His remarks followed a screening of the film, which centers on the life of a gay, black man in Liberty City, Miami. More than 570 students attended the event, which was held at Ryan Auditorium in Technological Institute.

During a Q&A session moderated by Communication Prof. Thomas Bradshaw, Jenkins said that, as a straight black man, the story of Chiron, the black boy who struggles with his sexuality while growing up, couldn’t have come from him.

That’s why he picked McCraney’s unpublished play and brought it to the big screen under a budget of $1.5 million, Jenkins said.

Rainbow Alliance co-president Jayleen James said it was important for Jenkins to visit campus not only because LGBTQ students of color on campus need to see themselves represented on screen, but because Jenkins created a movie that told an underrepresented story in a way that reached a “mainstream, white audience.”

During the event, Jenkins also spoke about how the film affected the Miami neighborhood it takes place in, Liberty City. He said the movie expanded the way people there see themselves.

Jenkins said the film’s trajectory — its awards and the box office numbers — as well as the effect the movie’s success had on those involved in it has raised the glass ceiling for those living in Liberty City. The movie was made for Miami, he said, adding he hopes its message helps communities like Liberty City expand their expectations of what they’re capable of.

Communication senior Maddie Thomas, A&O’s speakers director, said the group has been hosting joint speaker and film events in the last two years. Very early this year, she said, A&O knew it would have to pick between “Moonlight” and fellow best picture nominee “La La Land.”

“We made the choice pretty easily,” she said. “All of us had seen ‘Moonlight’ and were so outstanded by it and impressed by it … so we booked Barry and we decided we wanted him before the Oscars happened.”

For a few awkward minutes during this year’s Academy Awards, Jenkins’ “Moonlight” lost in the best picture category, due to an award envelope mishap. And for those minutes, Jenkins said he was okay with losing. But when “Moonlight” was announced as the correct winner — and the award was taken from “La La Land” — Jenkins said he realized in that moment that he was in a room full of people who had the same dream as him.

Only 89 movies, he said, have had the chance to stand on that stage to receive the award for best picture.

“None of those 89 films have achieved (getting best picture) in the way that we did, which was to share the stage with another film,” he said. “I remembered thinking I had to hug as many people from ‘La La Land’ as possible because I assumed they were hurting, and they were. If the roles were reversed, I would’ve been so unbelievably hurt.”

Jenkins also explained why he did not immediately start giving an acceptance speech during the Oscars.

“I looked out and every famous personality was sitting in that audience and they were looking up at me and that statue I had in my hand, they want that thing and I have it,” he said. “(That’s why) I didn’t want to say anything.”