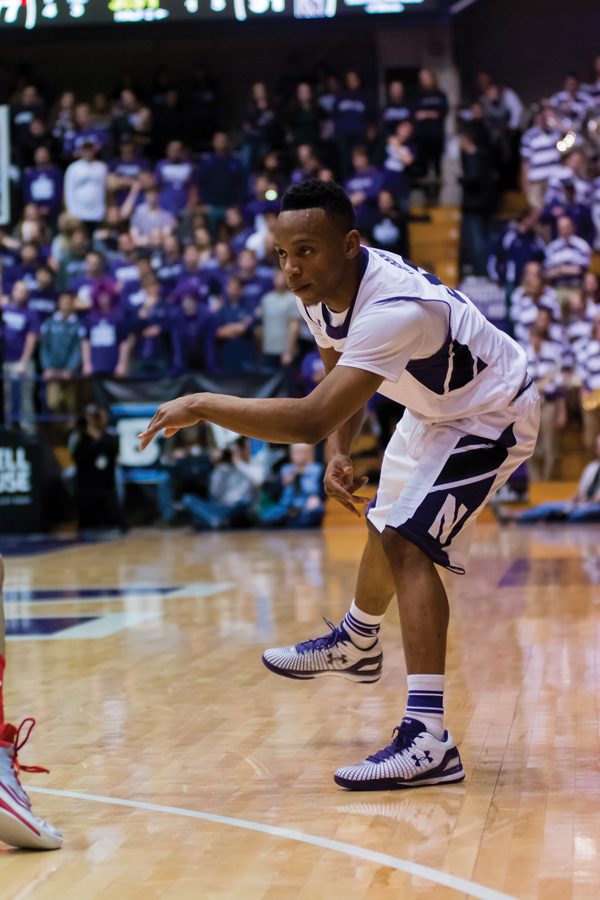 Johnnie Vassar makes a pass. The former NU basketball player filed a motion Tuesday opposing a separate motion to dismiss his lawsuit against the University.

Former Northwestern men’s basketball player Johnnie Vassar filed a motion Tuesday opposing the University’s own motion to dismiss his ongoing lawsuit against Northwestern and the NCAA, according to court documents.

Vassar filed a class-action lawsuit in November against NU and the NCAA, alleging the University’s removal of Vassar’s athletic scholarship in May 2016 marked a breach of its contract with Vassar. The suit also alleged that NU falsified timecards during an “internship” that allegedly included janitorial work and offered Vassar cash equal to the remaining value of his athletic scholarship to leave the program.

Tuesday’s motion “does not deal at all with the substance” of the complaint, Elizabeth Fegan, a lawyer representing Vassar, told The Daily.

The motion rebuts the University’s claim that Vassar, who remains an NU student, does not have appropriate legal justification to sue. It alleges the University is obligated to provide Vassar with services associated with an athletic scholarship, such as early registration and access to training facilities, a claim NU disputes.

The original lawsuit alleged Vassar was eventually moved off his athletic scholarship, despite a successful appeal last May to remain on it, according to the lawsuit.

In a separate document also filed Tuesday, Vassar filed a motion opposing NU’s motion to strike much of the language from the original suit. The section challenged by the document refers to allegations that the University offered Vassar cash to leave the program.

Vassar’s motion alleges that such an act would be a violation of NCAA regulations, as the NCAA’s amateurism guidelines prohibit cash payments to athletes. The suit also alleges that the NCAA transfer rule, which requires athletes to sit out for one year after transferring to another institution, is a violation of antitrust law.

“In most cases, those claims have been dismissed,” Phil Harris, the University’s vice president and general counsel, told The Daily. “The NCAA transfer rule has been upheld as a legitimate rule on many, many occasions.”

NU has staunchly denied the allegations against it. University spokesman Al Cubbage said in November that Vassar’s claims were “without merit and simply inaccurate.” Cubbage could not be reached for comment on Wednesday.

Coach Chris Collins declined to discuss the suit after a game in November, only saying that “we’ll let those things be handled behind closed doors.”

Lawyers representing Vassar also requested to file an extended brief Tuesday. The action, which both Fegan and Harris characterized as procedural, will allow the plaintiff to file a 25-page memo instead of the standard 15 pages, Fegan said.

Vassar could not be reached for comment. He appeared in 18 games for the Wildcats in 2014-15, his lone season with the team, and averaged under four minutes per contest.