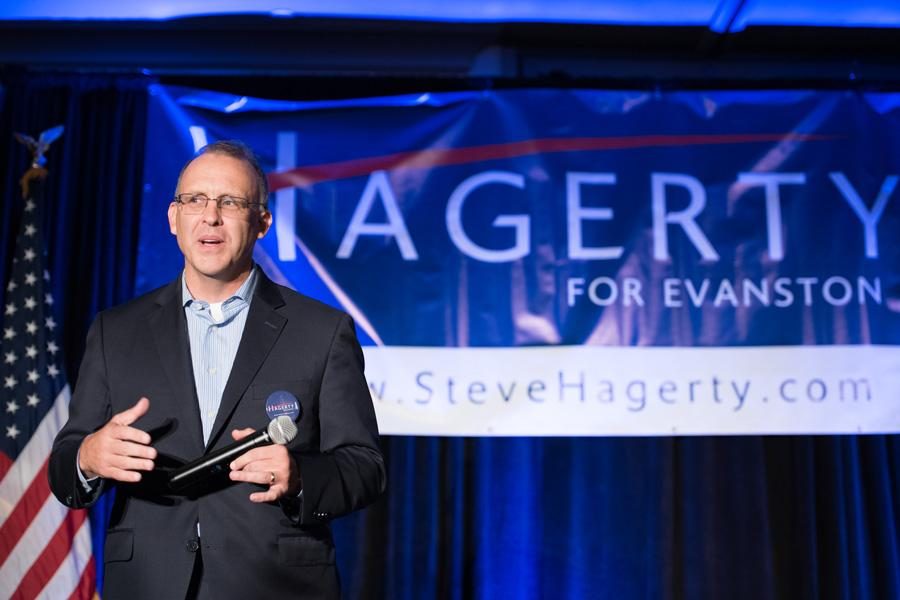 Mayoral candidate Steve Hagerty at his campaign kick-off event. The Hagerty campaign released a statement renouncing the endorsement by A Better Evanston.

Candidates across various Evanston municipal races have repudiated the endorsement of newly created political action committee A Better Evanston, citing the organization’s attack advertisements and a desire to limit third-party meddling in elections.

Blair Garber, the organization’s chairman, and Barbara Parker, its treasurer, filed to create the committee with the Illinois State Board of Elections on March 10. They cited a need to “educate voters in Evanston” about smarter economic growth and finding opportunities to broaden the tax base, according to the organization’s website.

Sean Tenner, Hagerty’s campaign manager, said the campaign first found out about A Better Evanston on March 20, when it received an email from a voter who sent a screenshot of an advertisement from the PAC. Shortly after, the Hagerty campaign released a statement renouncing the endorsement, saying Hagerty’s views on issues were “counter to those conflated with this group,” according to emails obtained by The Daily.

Tenner said the goal of the statement was to be “100 percent clear and unambiguous” about Hagerty’s stance on A Better Evanston’s endorsement. He said a campaign should be in control of the way its messages are delivered, and oftentimes does not like third-party groups weighing in on fundamental issues.

“You’re trying to speak to voters about what you are going to do if elected, what your background is (and) what your views on the issues are,” Tenner said. “And then, a group forms out of nowhere that you have no contact with and can say something totally contrary.”

Jon Kent, Cabot’s campaign manager, said her campaign didn’t hear about the PAC until it saw attack ads, paid for by A Better Evanston, directed at Cabot’s challenger, Ald. Judy Fiske (1st). Fiske decried those advertisements in an open letter posted on her campaign website, calling them a “campaign tactic” of Cabot, and likening them to tactics used by President Donald Trump and political consultant Karl Rove, who are both Republican.

Kent said the campaign doesn’t condone what A Better Evanston is doing with its advertisements and disagrees with much of what it claims to stand for.

“People have had different responses to (the ads),” Kent said. “There have been people who are confused … surprised, shocked, angry — all of the above. Especially the negative ones, it’s not a pleasant tone.”

Reid, on the other hand, said he has been focusing on his campaign and isn’t really concerned about the PAC’s formation. He said he doesn’t feel the group has made an impact on his race for city clerk.

“I’m running my race; I’m focused on my race, and I just see the ‘Better Evanston’ thing as a distraction,” Reid said. “To me it’s not news, or (it’s) somewhat inconsequential.”