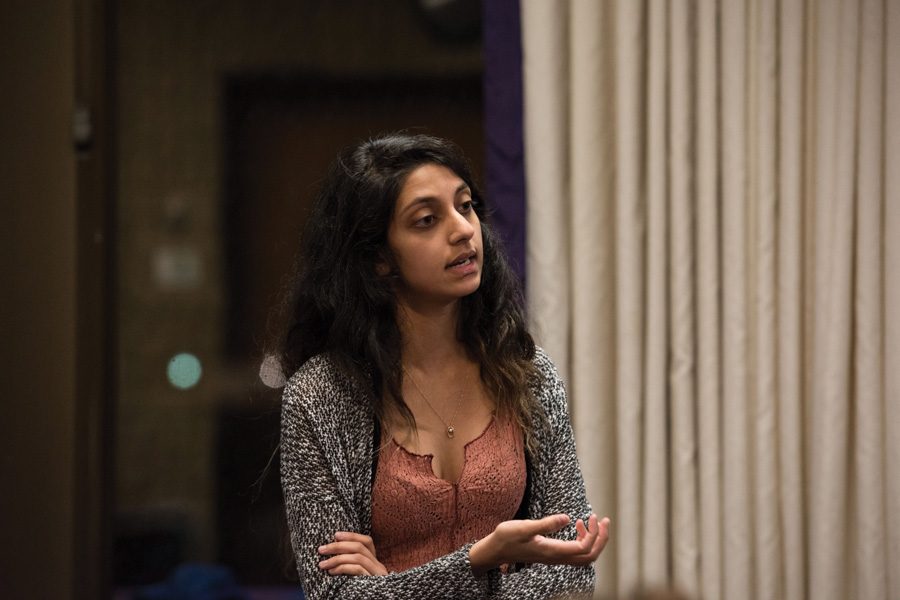 Nehaarika Mulukutla sometimes gets emotional when she thinks about her presidential student government campaign.

Her passion, she said, is to better students’ wellbeing by focusing on improving mental health resources, combatting sexual assault and making Northwestern a more inclusive campus.

On Tuesday, Mulukutla, the former Speaker of the Senate, announced her bid for Associated Student Government president with Rosalie Gambrah as her running mate. The Weinberg juniors’ motto, “Believe in Better,” shows their commitment to students’ happiness, Mulukutla said.

Mulukutla said her campaign builds from last year’s campaign of SESP senior Christina Cilento and McCormick senior Macs Vinson, because accessibility and inclusion issues have been crucial to both. But their campaigns differ because they are different people, she said.

“Rose and I are not Christina and Macs,” Mulukutla said. “It was a symbolic victory for marginalized students and for those who have traditionally been unheard and not represented by ASG … our entire administration has to be entirely reflective of our understanding of our own identities and who we are as people.”

Mulukutla and Gambrah, however, are running uncontested, which hasn’t happened in recent institutional memory, Cilento said. Though there is only one ticket, students can choose to vote no confidence.

Rather than focusing on any competition, Mulukutla said she spent her time crafting her campaign’s message. Though she did not expect to run uncontested, she said it ultimately doesn’t affect their campaign strategy.

“Nothing else has changed in what we stand for, or who we are as people, or what we are running for,” Mulukutla said. “But what has changed is that now we need to demonstrate to an even greater degree that we deserve the student body’s vote, and that we will earn it. We have to show people that we are still listening to voices.”

Gambrah, who previously served as the vice president for student activities, said she’s enjoyed reaching out to student groups to hear what they want to see changed. She said she loved her previous position because of the real changes she could make in students’ lives, like bringing a banner printer to ARTica Studios so students wouldn’t have to spend hours creating them.

“This campaign’s mission has completely changed from wanting to win the election … to making ASG relevant in students’ lives,” Gambrah said. “Voter turnout is a direct correlation to how much people care … so we need to make sure people care just as much.”

Weinberg junior Lars Benson, their campaign manager, said he was shocked when it became clear Tuesday night they were the only ticket. This, he said, presents a great opportunity to unify the student body instead of dividing it.

Benson said the platform’s focus on an “overhaul” about how students and administrators deal with mental health and the opportunity to create a safer campus for students excited him the most.

He said though Northwestern has Counseling and Psychological Services, he’s found its programs to be ineffective.

“Northwestern is genuinely a terrible place for dealing with mental health issues,” Benson said. “Not only do we actively normalize anxiety and depression, but the institution itself, the administration, is almost completely silent on dealing with these things in any kind of holistic way.”

“Given where we are, and what students have been saying, we wanted to remove any barriers to students getting care,” Adams told The Daily last April.

Students will have several opportunities to learn more about the campaign at three forums: one hosted by ASG on April 4, one hosted by The Daily on April 5 and another hosted by Political Union on April 6. Voting opens online at 5 p.m. on April 6, and will remain open for 24 hours.