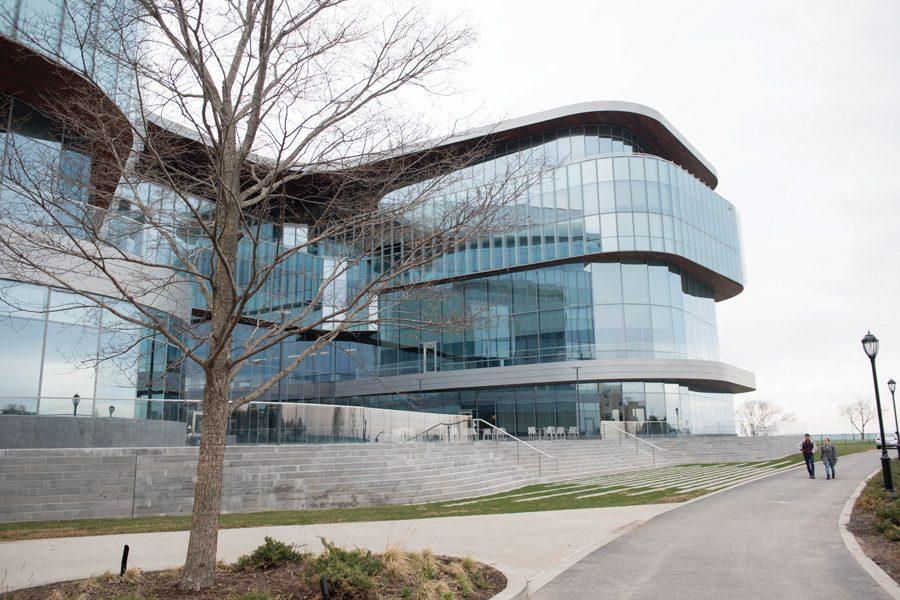 At 415,000 square feet, Kellogg School of Management’s new building offers business and economics students a new, vibrant place to study and collaborate. The building was inaugurated during a Wednesday function.

The new Kellogg School of Management’s Global Hub held its grand opening Wednesday, featuring tours of the facility and speeches from several deans and architects who worked on the project.

Kellogg’s new home is five or six stories high, depending on how one sees it, because of the penthouse on the last floor. Each story, the building’s leading architects said, is meant to encourage collaboration, communication and interdisciplinary work among students and faculty.

The glimmering building, sitting on the shores of Lake Michigan, took a little less than three years to build and boasts 415,000 square feet of space. It was inaugurated Wednesday afternoon as students made their way to class or stopped to chat around the structure’s main atrium.

Accord Consulting President LeAnn Paul, who has collaborated with Northwestern since the project’s conception in 2010, said administrators expect the building to welcome around 2,000 people every day. The building offers students and visitors panoramic views of Chicago, the Lakefill, Lake Michigan and the lakeside football field.

Kellogg Dean Sally Blount said she was honored to be the dean who inaugurated the building, which she said reaffirms Kellogg as one of the world’s best business schools.

“This experience is one for which I feel incredible gratitude,” she said. “You need to know that more than a million work hours went into creating this building and those work hours were put in by more than 1,500 people and bringing together materials from literally around the globe.”

Currently, the structure is on track to receive a gold LEED certification, a marker of its environmental sustainability, and receives most of its geothermal energy from equipment hidden underneath the football field’s turf. It has a 300-person auditorium, 13 classrooms, a dining hall, a cafe, creative work spaces and various study rooms.

The building’s facilities will be shared between Kellogg and Weinberg College of Arts and Sciences’ economics department. During the inauguration ceremony, Weinberg Dean Adrian Randolph celebrated the collaboration between both NU schools, saying it goes back to the early days of the Donald P. Jacobs Center, which formerly housed both Kellogg and the economics department.

Randolph cited the different certificates Kellogg offers to undergraduate students and the centers the two departments operate together as examples of collaboration between the schools.

“In this world where we’re collaborating, these structural ties that bind us together, my sense is this building is both an allegory but also a reality of how we might strengthen those ties, and that’s incredibly important,” he said.

Correction: A previous version of this story misstated the status of a sustainability certification, the number of people the building’s auditorium holds and the number of years it took to complete the project. The building is on track to receive a gold LEED certification, the auditorium accommodates up to 300 people and the project took less than three years to build. The Daily regrets the errors.