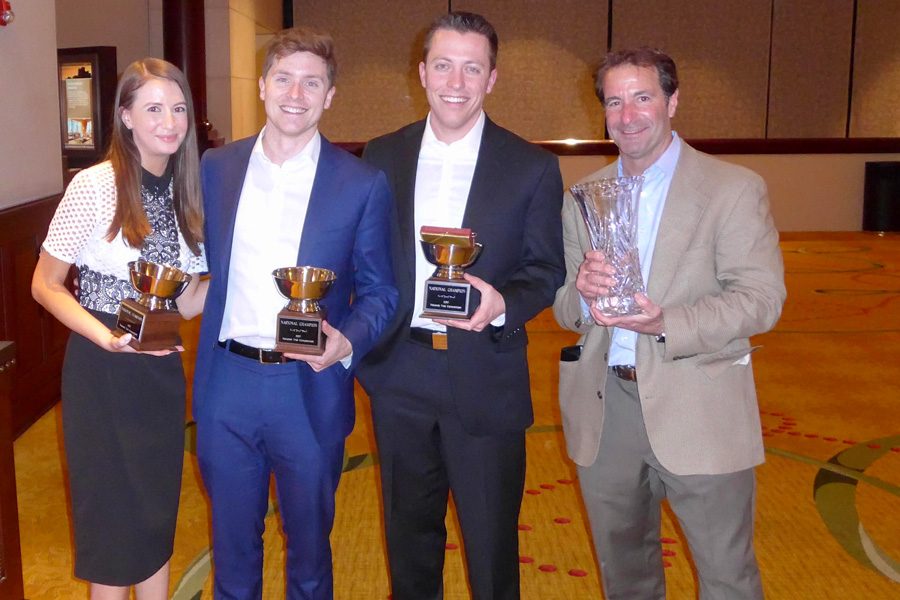 The team comprises third-year law students Stacy Kapustina and Douglas Bates, and second-year law student Garrett Fields. After multiple days of competition in Fort Worth, Texas, the trio –– representing the Bartlit Center for Trial Advocacy –– earned the 2017 championship title. With this win, NU ties the record for most wins, said Richard Levin, the team’s coach.

“They worked their tails off to achieve something, and they achieved it,” Levin said.

Preparation took around four weeks at their coach’s house, where they worked on both defense and prosecution sides of the case, Levin said. Many hours were dedicated to preparing an open statement for both sides, he said, preparing cross examinations, direct examinations and closing arguments.

During the lengthy practices, which lasted up to 20 hours every weekend, team members used constructive criticism to improve their performances, Kapustina, the team captain, said. She said these practices are what ultimately made the team prepared.

“The fact that we worked so tirelessly at this every weekend is what I would attribute our success to,” Kapustina said.

Levin, who has now coached two of NU’s winning teams, said he encouraged his students to think thematically in their arguments and said he supports creativity and passion in the courtroom. Success is achievable when the two qualities are combined, he said.

Levin said he also encouraged the students to develop a theme within their argument that people could relate to.

Steven Lubet, director of the Bartlit Center for Trial Advocacy, said these particular students were the reason for the group’s success and emphasized the educational aspect of the competition.

“(The team) is always successful because the students are always learning,” Lubet said. “We teach students how to analyze, prepare and try real cases. This is a competition, but really it’s preparation for (real-life) practice.”

Levin agreed with the team’s winning characteristics and said the three students “have it all.” He said they combined their respective strengths to their benefit — Kapustina’s strong debating skills, Bates’ measured composure and Fields’ ability to cross examine anybody. Their hard work, intellect and creativity drove them to claim the national title, Levin said.

“I’m the luckiest person in the world because I coach the smartest kids,” Levin said. “They’re a perfect team of perfect people, and that’s why they’re champions.”