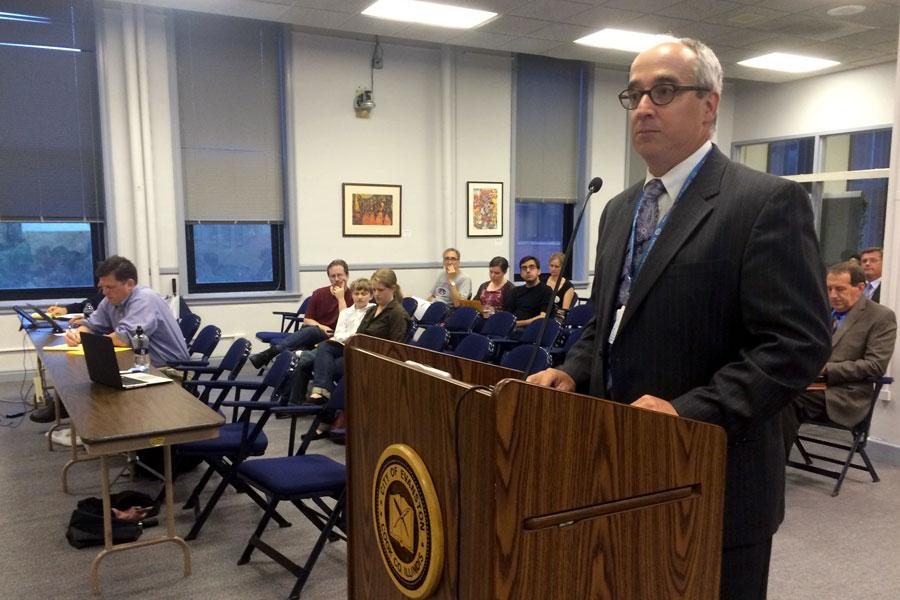 Assistant city manager Marty Lyons speaks at a city meeting. Lyons on Saturday responded to allegations by a former Evanston employee of undeposited cash and checks.

Evanston officials confirmed and refuted some parts of a former city employee’s letter, which reported finding $3 million to $5 million worth of undeposited money in a municipal office and criticized the city’s financial accountability system.

Assistant city manager Marty Lyons — who is also Evanston’s chief financial officer and treasurer — confirmed Saturday the backlog of deposits, which he said built up between January and mid-March last year. Lyons attributed it to the retirement of the revenue supervisor and a busy month of collections. He also said the total money amounted to only $2 million, of which less than $50,000 was in cash.

“Once the backlog of deposits was made known to the Treasurer, the deposits were made immediately, procedures were updated, and the City’s Auditor reported the issue to the City Council,” Lyons said in the statement. “The City’s Finance operations are excellent and staff is always working on continuous improvement.”

The former employee’s claims — first reported Friday by the Chicago Tribune — were sent in a March 7 letter to five aldermen on the Administration and Public Works committee, the Illinois Attorney General’s office and the news website Evanston Now. In the letter, the former employee claims to have disclosed the incident in Evanston residents’ public interest. The ex-worker also requested whistleblower protection under a state law that shields employees who report “a violation of a State or federal law, rule, or regulation.”

Eileen Boyce, a spokeswoman for the attorney general’s office, confirmed receiving the letter, but declined to elaborate until the office had reviewed its contents.

“We’ve seen it and we are reviewing it,” she told The Daily.

Mayor Elizabeth Tisdahl did not respond to a request for comment.

The would-be whistleblower — who was employed with the city for more than a year — also could not be reached for comment. It was not immediately clear why the employee stopped working for the city.

The ex-worker alleged city officials had violated the state Public Funds Deposit Act, which requires that “cash receipts be deposited within two working days of receipt,” according to the letter. The former employee said 35 days of undeposited checks and cash had been left in “unsecure locations” without being counted or verified.

The former employee also claimed city officials brushed off the incident and went into “minimize mode.”

After being informed of the backlog, Lyons said he instructed staff to deposit the cash within two business days and the checks by the end of the next week. He also denied that any money had been left in unsecured locations, and said nothing had been lost or stolen in the process.

“Since this time, the new Revenue Manager has updated all cash management functions/duties and no backlogs have occurred,” Lyons said in the statement.

The former employee also raised concerns about the city’s property tax revenue system. The ex-worker claimed that city officials intentionally misstated financial statements, because they “could not afford to lose the revenue or the fund balance.”

Toward the end of the letter, the former employee listed several recommendations for improving Evanston’s finance systems. One of those included an audit and finance committee that would “review in more detail the annual audit” and review “internal control weaknesses.”

The ex-worker also suggested devising an “independent and anonymous” means for reporting incidents, like an anonymous hotline or reporting vehicle. Currently, the former employee said, staff can only disclose “fraud, suspected theft and internal control weaknesses” up through the chain of command.

Lyons said the former employee shared these concerns while on the job and that they had been “reviewed by staff and the City’s Auditors as appropriate.” City manager Wally Bobkiewicz deferred to the statement and declined to elaborate.