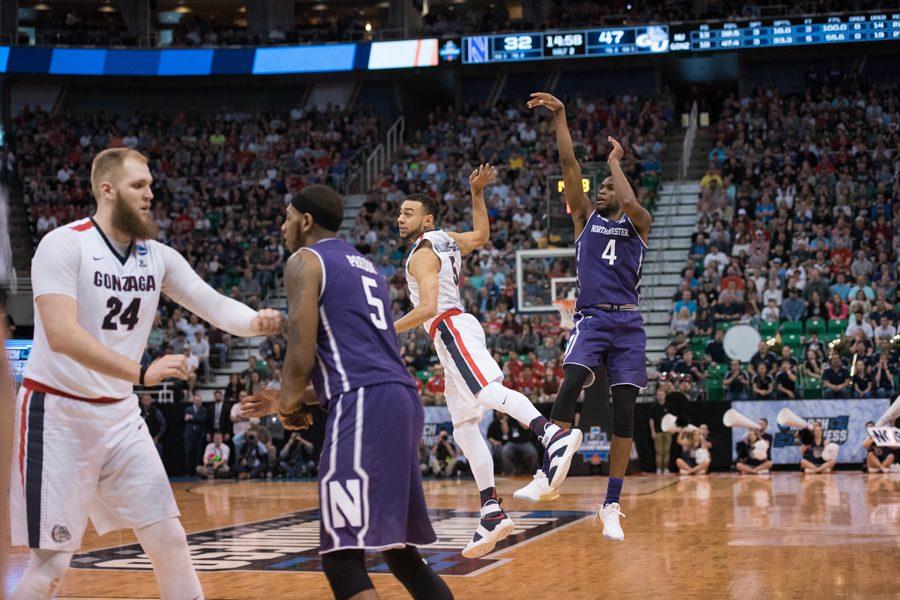 Vic Law attempts a jumper. The sophomore forward's inspired 18-point effort wasn't enough as the Wildcats' season came to a close against Gonzaga.

SALT LAKE CITY — Northwestern did not go down without a fight.

Facing a buzzsaw in the form of No. 1 seed Gonzaga (34-1), the Wildcats (24-12) fell flat out of the gate in the second round of the NCAA Tournament but battled to the buzzer in a 79-73 loss Saturday.

The second-round defeat ended a banner season for NU, which played in the NCAA Tournament for the first time in program history and topped Vanderbilt in the round of 64 before falling to the region’s top seed.

“We were a little shell-shocked early in the first half,” coach Chris Collins said after the loss. “We rallied together, and the performance that our guys put in the second half was some of the best basketball I’ve seen us play all season long.”

Gonzaga took over the game early with smothering defense, forcing the Cats into three turnovers during a 12-0 run that broke open the game. The Cats had eight turnovers and nine made field goals entering halftime as Gonzaga took a 38-20 lead into the break.

“The first half we didn’t play like we should have,” sophomore forward Vic Law said. “The cornerstone of our program is never quitting.”

NU did anything but, slowly nosing its way back into the game as it left its first-half offensive woes behind. After Gonzaga stretched its lead to 20 with 13:03 to play in the contest, the Cats ripped off a 15-4 run punctuated by a pair of 3s from senior forward Nathan Taphorn.

The stretch brought a large NU contingent back into the game and set the stage for a series of pushes from the Cats.

A putback slam from sophomore forward Vic Law, who scored in 15 of his 18 points in the second half, cut Gonzaga’s lead to 63-58. When sophomore center Dererk Pardon attempted a layup moments later only to be blocked by the Bulldogs’ Zach Collins, NU missed an opportunity to cut the lead to 3 and coach Collins received a technical foul arguing for a goaltend.

The NCAA issued a statement after the game acknowledging that the officiating crew missed the call. Gonzaga’s Nigel Williams-Goss made both technical free throws and the Bulldogs’ lead grew back to 7. NU never got closer than 5 in the final minutes.

The Cats scored 53 points in the second half, as McIntosh battled his way to 20 points on the afternoon and junior guard Scottie Lindsey shook off a quiet first half en route to 12 points.

“We played desperate in the second half,” McIntosh said. “Our activity caused them to turn it over and gave us some life.”

Despite 11 second-half giveaways, Gonzaga posted 41 points after the break, responding to each push and ultimately putting a stop to NU’s tournament run at the Vivint Smart Home Arena.

The game brought the careers of Taphorn and senior forward Sanjay Lumpkin to a close. The Cats expect to bring back four of five starters next season. Gonzaga coach Mark Few said he thinks NU has a “bright, bright future.”

This March, though, Few’s team will move on to the Sweet 16, while the Cats return to Evanston.

“We fought to the very end,” coach Collins said. “We just came up a little bit too short.”

A previous version of this story misstated when Northwestern beat Vanderbilt. NU beat the Commodores in the round of 64. The Daily regrets the error.