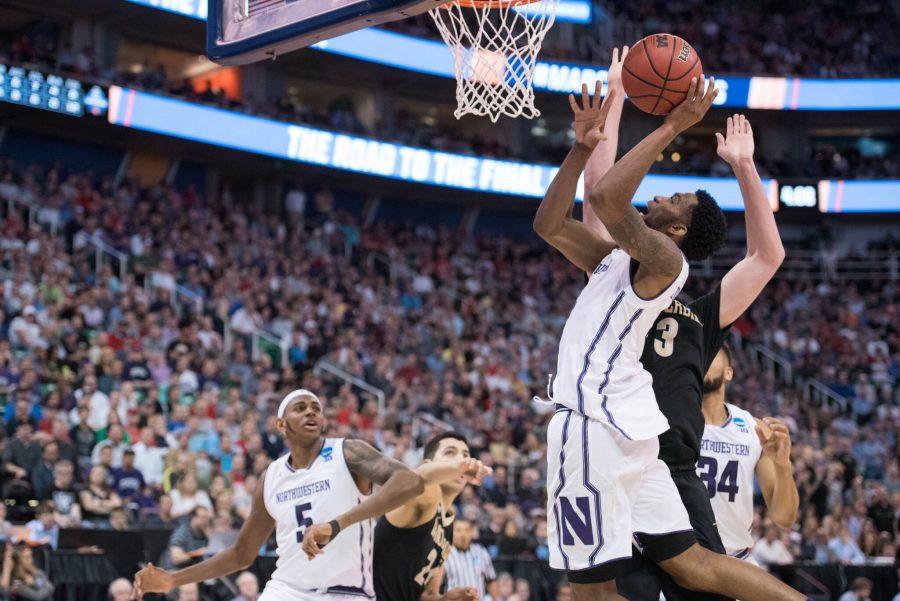 SALT LAKE CITY — Northwestern did not need Vic Law to be great Thursday. When the Wildcats face No. 1 seed Gonzaga on Saturday afternoon, they will.

NU (24-11) pulled out a win in its NCAA Tournament debut, sneaking past a flawed but hot-shooting Vanderbilt (19-16) squad thanks to solid defense and the late-game heroics of junior guard Bryant McIntosh and sophomore center Dererk Pardon.

The Cats played far from their sharpest basketball of the season. They coughed up 12 turnovers in a slow-paced grind and, though they hit on nearly half their shots, their offensive attack seemed limited at times to isolation buckets from McIntosh and junior guard Scottie Lindsey. While the backcourt duo combined for 39 points, Law didn’t add much at all on the offensive end. The sophomore forward finished with 2 points on 1-of-8 shooting.

For NU to take down the formidable and balanced Bulldogs (33-1) in the round of 32, it will need to step up its game. And that starts with Law, the team’s defensive ace who doubles as a sporadically explosive offensive force.

The Cats expect an incredible amount from Law. He typically guards the opposing team’s best scorer, regardless of their position. That means he will likely get the call against Gonzaga’s 6-foot-3 lead guard, Nigel Williams-Goss, whom both McIntosh and coach Chris Collins described as a “one-man fastbreak.” (Law said Friday he was not sure who he would matchup with, but McIntosh said Law would “probably” draw Williams-Goss.)

So Law will have to come to play defensively, as he always does. But the springy forward has proved inconsistent at the other end. In five of NU’s last eight games, he’s scored 4 or fewer points. In the other three, he’s scored 16 or more. In that stretch, the Cats lost every game Law struggled offensively except for Thursday’s and won every game he scored in double digits, including major victories over Michigan and then-No. 25 Maryland.

Law, who averages 12.1 points per game, is far from the only player NU relies on for scoring. When McIntosh and Lindsey are playing well, the Cats tend to play well.

But against mighty Gonzaga, NU will need all hands on deck. The Bulldogs put up 84 points per game and defend well. The Cats need to put forth a special performance to pull the upset.

And with Lindsey and McIntosh both firing on all cylinders lately, there is a particular emphasis on getting Law back into rhythm after his rough shooting day against the Commodores.

Collins said he’s hoping to get Law some post touches and some easy buckets early to allow the forward “to see the ball go in and kind of get him back on track.”

If Lindsey, Law and McIntosh all can get going, NU could score enough to make a game out of its big battle with the Bulldogs. The Cats are practically playing with house money, already soaking in the afterglow of a program-first appearance in March Madness and a first-ever NCAA Tournament win.

Law said he doesn’t feel much pressure entering the game, even after his slow start to the tourney and even facing a team with as much firepower as Gonzaga.

“At the end of the day, when you’re in the tournament, you need to stop worrying about yourself and need to worry about what you can do to keep dancing,” Law said.

To keep NU dancing, though, Law will need to be in attack mode offensively against Gonzaga. Another 2-point performance probably won’t cut it for the Cats.