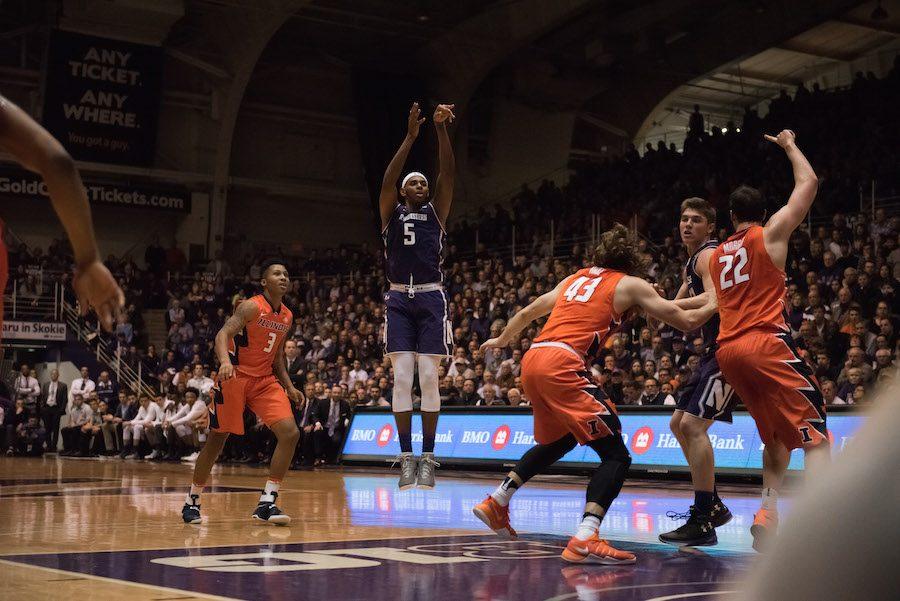 Dererk Pardon puts up a jumper. The sophomore center stretched his game outside the paint in the Big Ten season, but found minimal success on his jumpshots.

Dererk Pardon’s offensive game has been predictable. The sophomore center has relied on his finishing around the rim, attempting about two-thirds of his shots in conference from within the restricted area. Despite Pardon’s limited range, the center has had tremendous success this season from down low, hitting a team-best 68 percent of those shots while banging with larger bigs in the Big Ten.

After missing eight games early in the season, including the opening stretch of conference play, Pardon has been found a niche in Northwestern’s offense. The big has averaged 8.5 points and eight rebounds per game and contributed defensively as well, averaging two blocks per game.

Although Pardon has done most of his damage from right under the rim, the center started to test the waters outside the paint this conference season. Roughly 16 percent of his shots came from outside the paint in Big Ten games, though he hit just 4-of-17 of those attempts.

Pardon has had issues stretching the floor, but he’s flashed an effectiveness on the block when he has had the chance. The center shot a solid 72.2 percent on shots inside the paint but outside the restricted area during Big Ten play.

But Pardon is still far from a consistent scorer away from the rim. The sophomore still struggles at the free throw line, shooting a meager 51.7 percent from the stripe. And he continues to be hesitant with the ball in his hands when he’s outside his comfort zone.

Pardon still has two years to develop his jump shot and establish himself as more than just a post scorer. But for now, the big man makes an impact as an interior presence for an NU team that needs it.