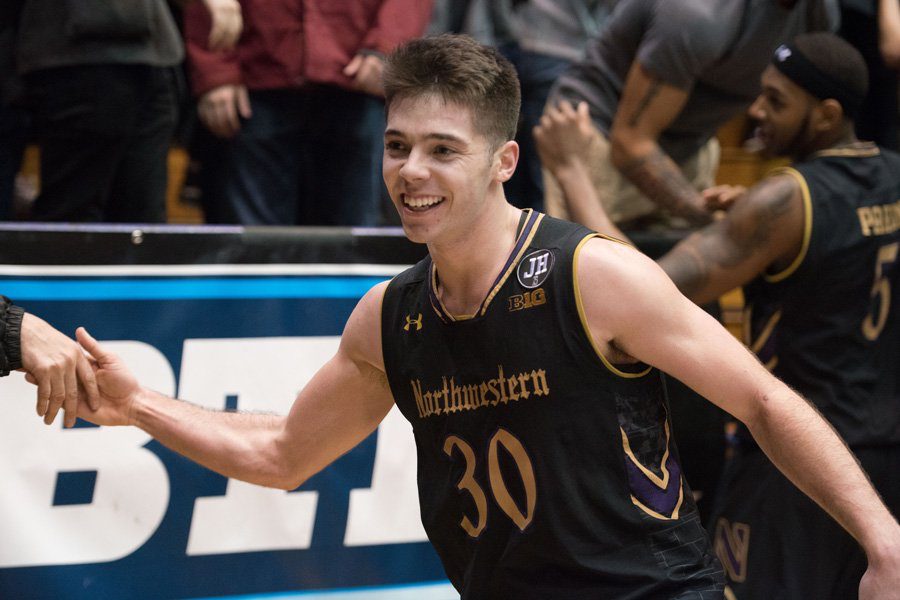 The Wildcats are making March their month.

Friday’s Big Ten Tournament matchup between Northwestern (23-10, 10-8 Big Ten) and No. 25 Maryland (24-8, 12-6) looked precarious for the Cats at moments, as they struggled through parts of the second half. But NU found its groove late, pulling away for an impressive 72-64 win to secure the team’s first-ever Big Ten semifinals berth tomorrow.

Despite playing for a second straight night, the Cats showed few signs of fatigue or sluggishness out of the gate. NU used good movement and shooting to get out to an early lead, and a 3 from sophomore forward Vic Law gave it a 28-18 edge with 8:48 left in the first half.

With three freshmen starters, the young Terrapins could have folded at that point. Instead, they fought back behind 12 first-half points from freshman Kevin Huerter and took a 36-34 lead into the break after a buzzer-beating fadeaway from Maryland forward L.G. Gill.

NU ended the period with nine turnovers to squander its early advantage, and a scoreless streak of over five minutes spanning halftime left the Cats down 44-34 early in the second. Seemingly on the ropes, NU fired back with a 20-2 run to retake control heading into the game’s later stages.

That run was one too many for Maryland, who couldn’t string together enough stops down the stretch to threaten the Cats’ lead. NU executed offensively as the second half wound down, and it closed out the game without issue to set up a showdown with Wisconsin in tomorrow’s semifinal.

At various times in the Big Ten season, NU’s three best players — Law and junior guards Bryant McIntosh and Scottie Lindsey — have gone through slumps. Friday wasn’t one of those days. The trio combined for 50 points in the game, and each of the three looked comfortable and confident under postseason pressure. McIntosh, Law and Lindsey each have the talent to carry their team to victories; with all three rolling, the Cats had more than enough to earn a win over the Terrapins.

Cats fans still may have nightmares about Melo Trimble, who carved up NU in Evanston earlier in the year to the tune of 32 points, but he wasn’t the only Terrapin perimeter player who found success on Friday. Huerter finished with 19 and fellow freshman Anthony Cowan notched 13 to go with 20 points from Trimble. Guard play wins in March, and if the Cats are to make a run in the NCAA Tournament, they’ll have to find a way to slow down backcourts as good as or better than Maryland’s.

3. Still, these Wildcats can make noise in the NCAA Tournament

With the stars clicking, the defense holding strong and the team bouncing back gamely from a double-digit deficit in the second half, NU seems to be peaking at just the right time. The Terrapins found that out the hard way Friday, and other teams around the country have to start taking notice, too. With the program’s first-ever ticket to the NCAAs all but punched, the Cats are playing well and seem to have the talent on the roster to win games in the tournament. For a team that has never reached these heights before, it’s a good place to be.