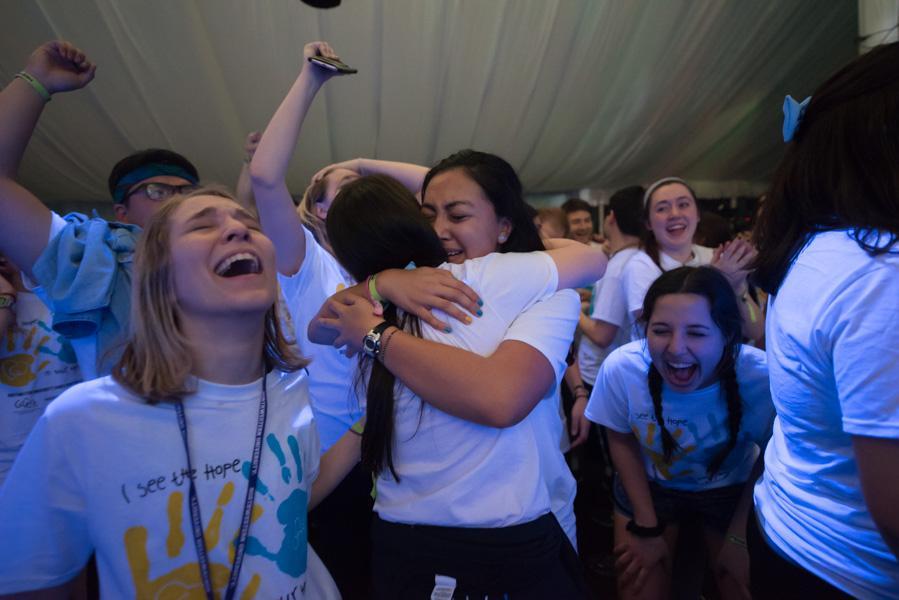 The finance committee announced early Sunday morning that GiGi’s Playhouse received $983,833 — the largest check DM has presented to its primary beneficiary. The money will go toward offering free educational and therapeutic programs for children and adults with Down syndrome.

“We feel like its message, entirely based in the celebration of diversity and of our differences, is something that is particularly needed right now,” DM executive co-chair Jenny Halpern told The Daily. “And so it’s felt very timely and we feel really lucky to be pouring so much energy and effort into a cause like this.”

Speakers from GiGi’s Playhouse thanked dancers for having courage, heart, strength and determination by raising both money and awareness.

Gonzalo Vega, whose 5-year-old son Jacob has Down syndrome, said he found an open door at GiGi’s Playhouse three months ago.

“(When I found GiGi’s), I strongly believed that I was in the right place,” Vega said. He added that he hopes to continue to “teach the others how beautiful, how amazing it is to have a baby with Down syndrome.”

“By dancing for 30 hours, you (have shown) the world that you believe in helping individuals with Down syndrome,” said Maura Cullen, the liaison between Northwestern and GiGi’s Playhouse.

Cullen established the Amina Grace Speech and Language program at GiGi’s Playhouse in memory of her daughter who died in 2014. In the fall, DM was able to raise more than $132,000 to fund the entire speech therapy program for individuals with Down syndrome — more than their initial goal of funding 1,000 program sessions.

“Now that we’ve walked this journey together you’re forever a part of the GiGi’s family,” Cullen told dancers. “Welcome. It’s a pretty awesome place to be.”

DM also presented the Evanston Community Foundation, the secondary beneficiary of 20 years, with $109,314 — the largest check to ECF in DM’s history — so the foundation can continue supporting local organizations and projects.

Monique Brunson Jones, ECF president and CEO, said DM has contributed to a significant portion of the funds ECF has granted throughout its 30-year history. DM has contributed over $1 million of the nearly $7 million the organization has given in grants to the community, she told The Daily.

Jones said Northwestern students have an impact on ECF’s work in terms of more than just funding. She said in ECF’s two-decade partnership with DM, student involvement has helped her team approach problems more creatively.

“The students come along and they see things with a different perspective,” Jones said. “It causes us to think creatively and ask different questions that we probably would do on a normal basis.”

Many students said they felt grateful for being a part of this year’s DM and for breaking finance records.

“I have a brother with special needs,” said Madison McCann, a Weinberg junior who has danced for the past three years. “The fact that it’s such a huge total and it’s going to make such a huge difference is really special to me.”

McCormick senior Nnenna Nwagbo got emotional as the total was announced and the last block came to a close.

“I am overjoyed with bittersweetness because I’m 120-hour and I’m so glad we did it and I want to do it again,” Nwagbo said, laughing. “I actually might; I’m coming back next year.”

DM executive co-chair Ian Pappas told The Daily that the DM team was particularly proud of a new grant program, run by Student Enrichment Services, that helps dancers who may struggle to get over the $400 minimum. The funds were disbursed as late as Thursday night, he said, with the goal in mind of eliminating the financial barrier to participating in the NU tradition.

“We fundraised from May until … the weekend of for students so that no matter their socioeconomic background, they’re able to enter the tent and experience NUDM,” Pappas said.

This story was updated to clarify when Dance Marathon raised money to fund the speech therapy program at GiGi’s Playhouse.