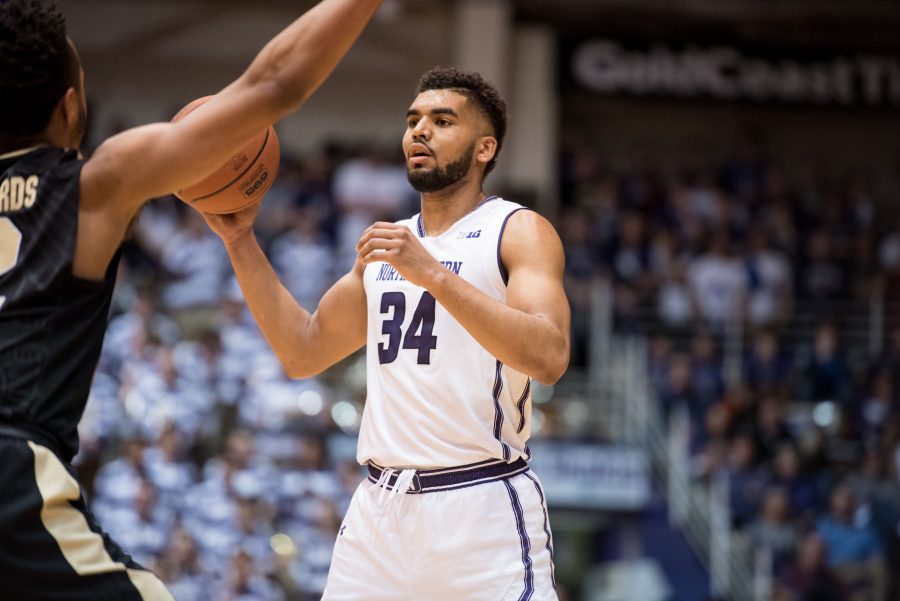 Sanjay Lumpkin looks to pass. The senior forward went a perfect 5-for-5 from the field in Northwestern's Senior Day loss.

Sanjay Lumpkin said he cried when coach Chris Collins gave Northwestern a pre-game speech in the locker room. He cried when he, accompanied by his family, was honored prior to tip-off as part of Senior Day festivities.

The senior forward looked like he might start crying again when talking about his mentor Drew Crawford in the postgame press conference, but he held it together.

“I was honestly just trying to soak in everything today,” he said. “I think I used up all my tears.”

In between the emotional moments of his final game at Welsh-Ryan Arena, Lumpkin scored 13 points on 5-of-5 shooting and pulled down seven rebounds, including five on offense.

“It was nice to see the ball go in,” Lumpkin said. “We knew where we’d be able to attack them, and especially with their bigger guys (I could) use my quickness, and that was all our gameplan.”

Although he has the Big Ten and, in all likelihood, the NCAA tournaments left to play, Sunday’s game closed the final chapter in Lumpkin’s basketball career in Evanston.

He joined the program in 2012 a year before Collins became coach. The team has seen much turnover throughout Lumpkin’s five years.

Lumpkin guarded Purdue’s leading scorer in the game, Vince Edwards, on the defensive end and attacked potential National Player of the Year Caleb Swanigan in the paint on the offensive end, and still had the energy to make his biggest impact down the stretch.

Between the six- and three-minute marks of the second half, when the Cats cut Purdue’s lead from 9 down to 1, Lumpkin pulled down four rebounds and made two crucial put-back lay-ups.

“He played great tonight,” junior guard Bryant McIntosh said. “(He did) all these tough things that nobody will mention. I’m really upset that we couldn’t find a way to get a win for both of our seniors, but especially him.”

Lumpkin’s quiet versatility might not be often mentioned, but for a few hours Sunday afternoon, a jam-packed crowd of 8,117 celebrating Welsh-Ryan Arena’s final game in its current incarnation certainly appreciated it.

And Lumpkin appreciated them, too.

“As soon as I got in the tunnel with my family, heard the crowd, saw all the guys, it was definitely going to hit me,” he said. “This is a special place for me. It will always have a special place in my heart.”