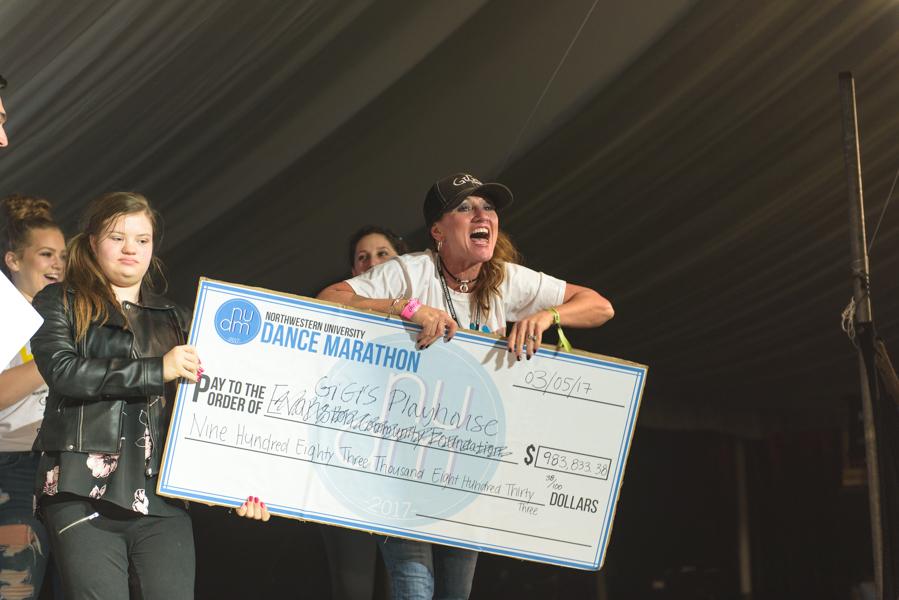 Nancy Gianni, CEO of GiGi’s Playhouse, celebrates after being handed the final check at the end of Block 10. GiGi’s Playhouse received $983,833, the largest check DM has presented to its primary beneficiary.

After nearly full day’s worth of dancing with students and observing the action at Dance Marathon, GiGi’s Playhouse CEO Nancy Gianni described the 30-hour fundraiser as “so much more than I could have ever imagined.”

Gianni, founder of GiGi’s Playhouse — DM’s 2017 primary beneficiary named after Gianni’s daughter, who has Down syndrome — said Northwestern has provided a platform for spreading a message of acceptance that the organization would not have had on its own.

GiGi’s Playhouse, the only nationwide network of Down syndrome achievement centers, is a nonprofit organization providing support services at more than 30 locations in the U.S. and Mexico. It serves 3,000 new families per year, equating to 50 percent of all new babies born with Down syndrome in the U.S., and has provided programs to more than 26,000 families, according to its 2015-16 annual report.

“Sometimes I hope to get through to one person and that one person will help somebody else, but you guys got the message out to everybody,” Gianni told The Daily. “Throughout the last seven months the message got out there, and it’s amazing.”

Gianni said the funds from DM will effect change within the organization that will affect people for years to come.

DM production co-chair Ava Armacost said being on the executive board and spending time with people from GiGi’s has made her want to share its message with everyone else.

“I’m so passionate about spreading that message (of acceptance),” the Weinberg junior said. “That’s … my favorite part, being able to share this passion that I’ve grown through GiGi’s.”

Gianni said it is difficult to pinpoint what changes she most hopes to see post-DM, because they all could be “transformational” and important in the long term, she said. She is particularly excited about fitness programs, speech therapy and the development of mobile programs that will remotely provide GiGi’s programming for individuals and communities in areas that do not have access to a physical space.

Because GiGi’s functions with a model in which its various locations apply the same curriculum, funds raised through DM will multiply to help countless people, she said.

“Everyone here (at NU) is going to go on to do great things, and they have this experience to take back with them,” Gianni said. “They have acceptance and inclusion and a vision of a better world that they’re now gonna take out there.”

Production co-chair and Abigail Schroeter said her favorite part of the event so far has been watching interactions between dancers and those directly impacted by DM.

“It’s really magical to watch people really interact with the heroes and get to know them,” Schroeter said. “People just light up when they realize they’ve made that connection, and it’s something that will definitely … personally stick with me forever.”

Gianni praised the executive committee, saying that it has “taken this campus by storm” to improve the way students see individuals who have disabilities. Observing DM has shown that the fundraiser not only raises money but also creates attitude changes, she said.

“That’s something so above and beyond what GiGi’s Playhouse, on its own, is able to do,” she said. “I’m just in awe of the students here. … This is bigger than any of us realized when we started the whole thing together.”