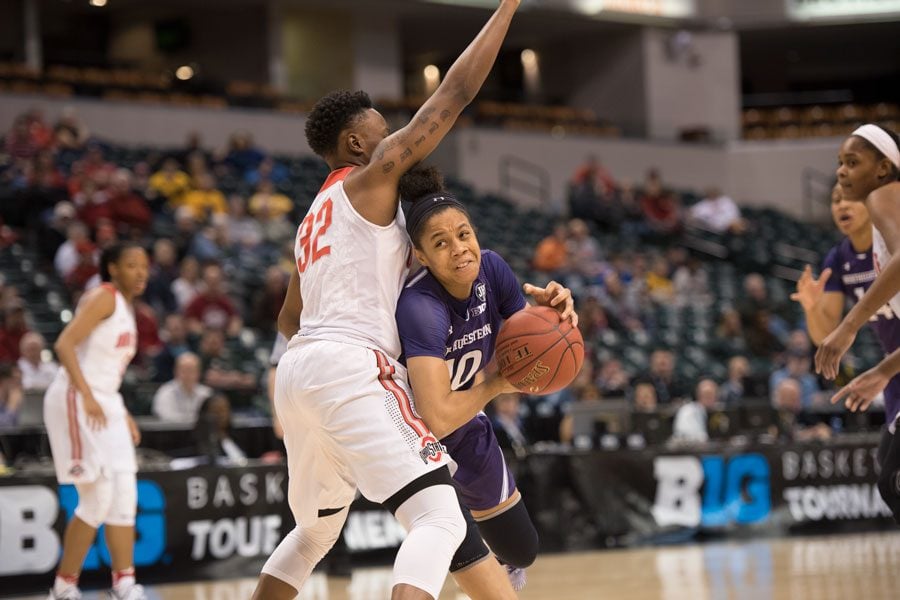 Nia Coffey drives around a defender. The senior forward scored 21 points despite fouling out with 4:48 remaining in the game.

INDIANAPOLIS — Northwestern hardly had a chance.

No. 1 seed Ohio State (26-5, 15-1 Big Ten) began the game in a full-court press, seemingly trying to tire out the No. 9 seeded Wildcats (20-11, 8-8) on their second straight game day. Making 9-of-16 shots from beyond the arc in the first half — coupled with three fouls each from seniors Ashley Deary and Nia Coffey in that span — the Buckeyes wreaked havoc early and never let up, more than doubling up on NU 51-24 at halftime and cruising to a 99-68 win.

“Their press was giving us problems and we just turned over the ball a lot, and we just couldn’t get into our flow on offense,” Coffey said.

Big Ten Player of the Year Kelsey Mitchell led the charge for Ohio State, tallying a game-high 27 points. Even more impressive, Mitchell was 6-of-9 shooting three-pointers.

“We could have done a better job handling the press,” McKeown said. “Ohio State did a really good job getting in the passing lanes, trapping us, deflections, forced us to play faster than we wanted, so that led to us taking some … some quick shots that played into the transition of both teams.”

Coffey finished Friday’s contest with 21 points despite fouling out with 4:48 left in the game, but will likely need the Cats to earn a WNIT berth to break the program’s all-time scoring record. Anucha Browne holds the current record with 2,307 points set in 1985, while Coffey sits at 2,287 points.

“Ashley Deary has played probably as many minutes as anybody in the history of this program, so it’s hard to be on the floor without her,” coach Joe McKeown said. “Picking up three fouls put us in a bind there.”

As the game spiraled out of control, tensions were high between the teams. Early in the third quarter with the Buckeyes leading 68-32, Ohio State guard Kiara Lewis shoved Coffey to the ground from the neck. Lewis was assessed a technical foul, helping NU trim the deficit a little, but the Buckeyes already had an insurmountable lead.

If there was any silver lining to be found Friday, it was younger players getting some minutes toward the end of the game. With the three senior captains graduating, the experience in a tournament setting was valuable.

The Cats are likely to continue their season in the WNIT. The bracket will be announced Mar. 13.

This story was updated at 2:42 p.m. with postgame quotes.