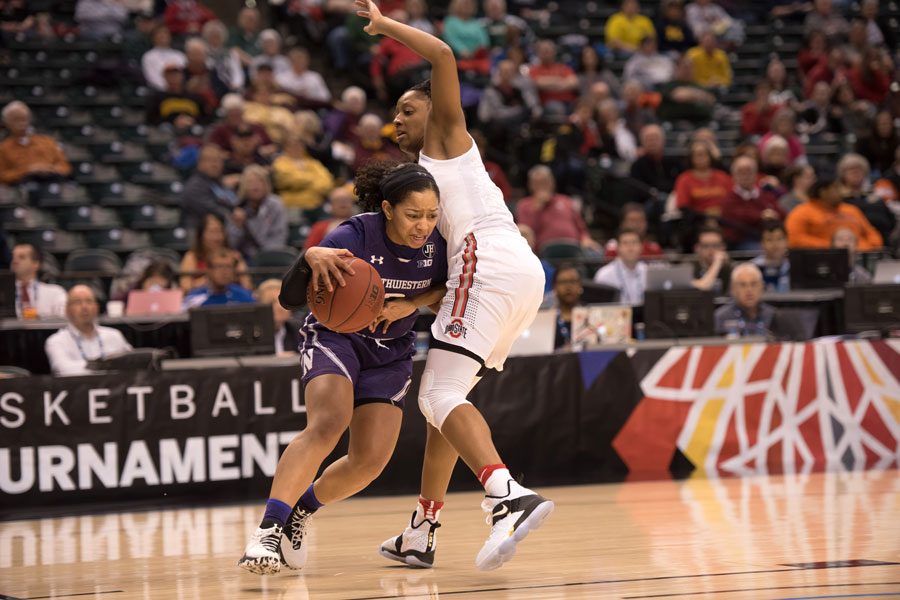 Ashley Deary struggles against her defender. The senior guard committed five of the Wildcats' 21 turnovers in Friday's loss to Ohio State.

In short, the Wildcats gave the ball away. A lot.

NU (20-11, 8-8 Big Ten) committed 21 turnovers, tying a season high and leaving the Cats in a huge first half hole they never recovered from in No. 9 Ohio State’s (26-5, 15-1) 99-68 win Friday in the Big Ten Tournament quarterfinals. Sixteen of those giveaways came in the opening two quarters.

Foul trouble compounded NU’s woes. Senior guard Ashley Deary, the Cats’ only consistent ball handler, picked up her third foul early in the second quarter and was forced to the bench for the remainder of the half. Depth issues have forced Deary into playing all 40 minutes in several recent games; freshman guard Byrdy Galernik saw her most significant action in weeks on Friday.

“It’s hard to be on the floor without her. And (her) picking up three fouls put us in a bind,” coach Joe McKeown said. “The things we probably needed to do against Ohio State, we just couldn’t get done today against the press.”

Senior forward Nia Coffey also tallied three first-half fouls, forcing another valuable veteran off the court and leaving the Cats to rely on a cast of less experienced players.

NU’s woes against the full-court press were somewhat of a surprise, as the Cats broke it effectively in the opening minutes. The turnovers started flowing shortly thereafter, however, against a Buckeyes team with the necessary depth and length to cause problems.

“Our initial pressure was really good. We wanted to make them play 94 feet,” Ohio State coach Kevin McGuff said. “That really set the tone for everything else.”

NU struggled to find an offensive rhythm throughout, and players often ended up isolated far from the basket.

It was a sharp reversal from recent games against Ohio State. NU had fired on all cylinders offensively in the teams’ three meetings over the last two years, stunning the then-No. 5 Buckeyes 86-82 last year and putting up 87 points in another near-upset in January.

The Cats’ woes were also in sharp contrast to Ohio State’s attack, which flowed crisply. Big Ten Player of the Year Kelsey Mitchell torched NU for 27 points and contributed four of the Buckeyes’ 20 assists. The Cats, meanwhile, had just 12 assists to their 21 turnovers.

NU’s star seniors committed the majority of NU’s turnovers. Coffey was credited with six, and Deary had five giveaways to just three assists.

On a day when very little went right for the Cats, Deary summed up NU’s biggest problem: “We just had difficulty breaking their press.”