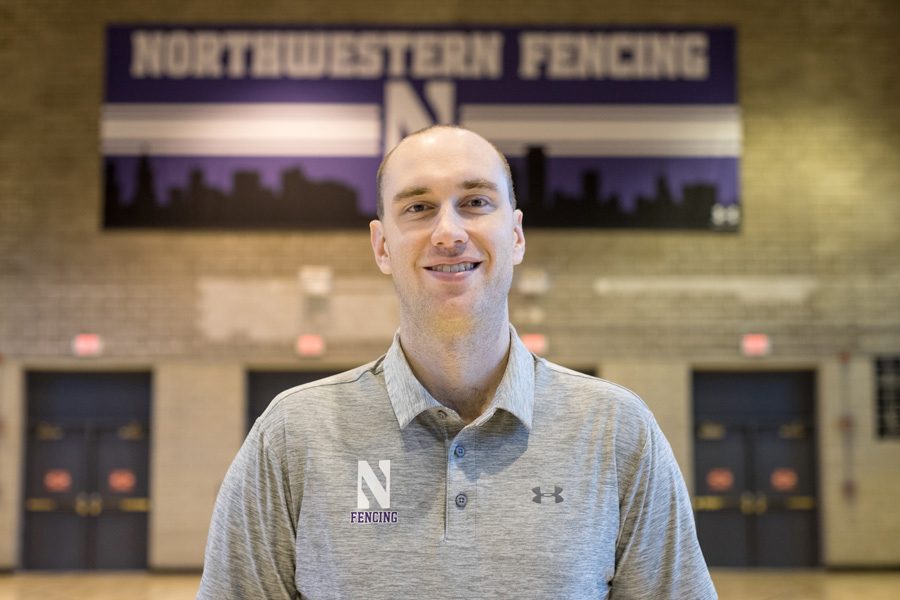 After one season at the helm, Zach Moss is looking to write his own legacy as the first new Northwestern fencing coach since 1978.

Laurie Schiller was ready to make a hire.

And in 2014, with his retirement looming, Northwestern’s coach of 38 years wasn’t simply looking for an assistant. He was searching for his eventual successor.

There were about 30 applicants, from all over the United States and abroad, Schiller said. He knew almost all of them and was surprised to see an application from a high school coach in Minnesota named Zach Moss. Schiller said he met Moss when he was a kid, as he knew his dad, John, through the tight-knit fencing community for nearly 40 years.

After going through the interview process, Moss got the job.

“I hired him in the hope that he would prove himself in the couple of years that we gave him and that (athletic director) Jim Phillips would see that this was the guy that should replace me,” Schiller said.

Last spring, Schiller retired and Moss was promoted to lead the program, ushering in a new era of Wildcats fencing and leaving the young coach with big shoes to fill.

When he was 5, Moss asked his parents if he could start fencing.

“I wanted to when I was five, and my parents told me ‘when you turn 6,’ assuming I’d forget,” he said. “I remembered.”

The son of a lifelong fencing coach and referee, Moss was born in New Jersey but moved to Lee, New Hampshire, a town of about 4,300, when he was three. John brought his son to fencing tournaments that he’d coach or referee in, so the younger Moss has spent his whole life around fencing.

In fact, he said he recently met someone who said they had met at a tournament when he was just one year old. Moss, of course, didn’t remember.

He started fencing locally when he was eight and nationally when he was just 10. In eighth grade, Moss had to decide between competing on the school’s basketball team or fencing.

Even though his dad spent his whole life around fencing, he told his son he wanted him to continue with basketball.

“He was like, ‘There’s no money in being a competitive fencer,’” Moss said, laughing. “I kind of proved him wrong, I guess, because I ended up with a job in fencing.”

Moss eventually earned a scholarship to fence at Duke University, where he was a four-year letterwinner. But after a collegiate career plagued by injuries, Moss left Durham unsatisfied.

He moved to Minnesota to continue training, working as a fencing coach at St. Paul Academy and guiding the team to two state championships in his four years. To support himself, he worked full-time at the Concordia University library, where he also worked on his Master’s Degree in Sports Administration.

Eventually, Moss set his sights on a collegiate job. He said when he saw the opening to coach at Northwestern, he sent in an application, not expecting to land the gig.

Moss said he knew when he was hired that Schiller had tabbed him as his eventual replacement. But he added that he knew he’d have to prove himself.

“Right off the bat I really liked his personality,” she said. “He was very forthcoming, very open, really easy to talk to.”

Moss learned for two years under Schiller, who had been NU’s coach since 1978. Under Schiller’s guidance, the team finished in the top-ten in the country for 17 straight season. He also won Midwest Fencing Conference coach of the year 11 times, including his last two with Moss as his assistant.

However, Schiller announced before the 2015-2016 campaign that it would be his final season. Moss was immediately named as his successor and took over after a year in which the Cats won the Midwest Fencing Conference Championships.

Even though Moss had been around the program for two seasons as an assistant, he said he has still faced a learning curve. And even though he learned a lot under Schiller, he knows the program will be different with its first new coach in 38 years.

“Change is hard for people,” he said. “There’s no way I’m gonna be Laurie. Good or bad, I’m a different person, so getting upperclassmen on board is a challenge. We have a team of 11 seniors, so that transition and those changes are a hard thing to work through.”

This season, the team has stayed in the top-ten nationally for the whole year. It’s been an up-and-down season, with losses to unranked teams but a near-upset of then-No 2. Princeton and a win over then-No. 4 Ohio State. NU finished behind the Buckeyes in the MFC Championships this past weekend, taking second place behind the conference powerhouse.

Every time a new coach takes over, the inevitable question becomes: will the upperclassmen buy in? Or will they be disappointed that the coach who recruited them is no longer part of the program?

Moss’ seniors said they have bought in, in part due to the fact that they knew him and worked with him before he became head coach. Senior sabre Cindy Oh said Moss relies more on new technology like watching film, something that wasn’t widely used in fencing until recently.

Oh said Moss’ laid-back personality is a stark contrast from Schiller’s intense approach. But she said his quiet demeanor doesn’t hold him back.

“Zach is a little more passive,” she said. “He isn’t really in your face or super vocal, which is exactly what Laurie was.”

Schiller said he hasn’t been very involved with the team this season and wants it to be that way because he doesn’t want Moss to feel like he has someone looking over his shoulder.

Moss wants to build on the successful program Schiller built at NU and eventually compete for a national championship.

“It’s a hard place to be, but that’s ultimately where I’d like to see the team going,” he said.

And if Schiller’s lengthy term in Evanston is any indication, he’ll have plenty of time to get it done.

Correction: A previous version of this story misidentified the Minnesota school where Zach Moss coached fencing. The school is St. Paul Academy. The Daily regrets the error.