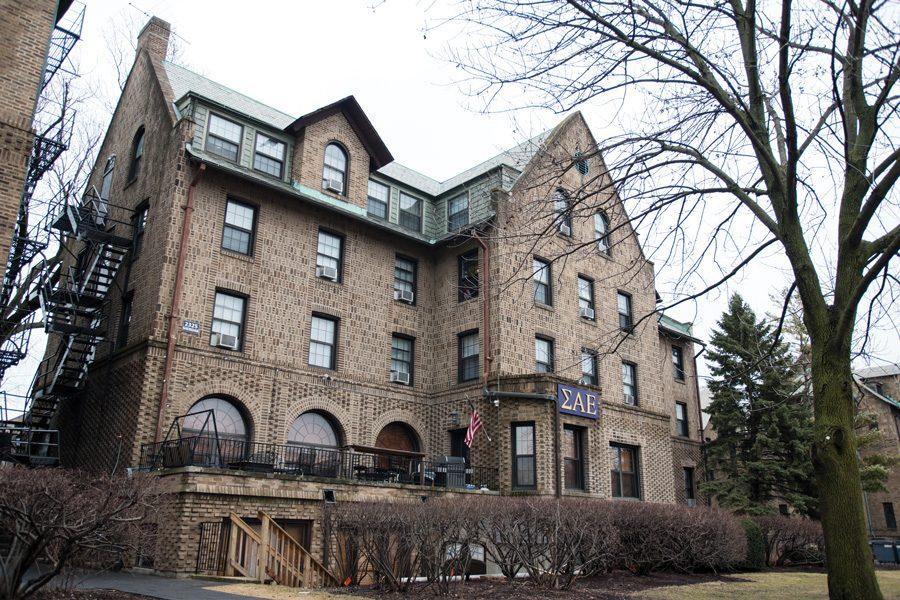 Sigma Alpha Epsilon fraternity was put under a “cease-and-desist order” from its national headquarters after the University sent out an alert about an anonymous report alleging multiple sexual assaults and possible druggings there. The University said in early February that the Sexual Harassment Prevention Office is investigating the report.

On the night of Feb. 6, University President Morton Schapiro logged online to check the news when he saw a security alert that he said shocked him.

The alert, posted on the University’s website and sent in an email to Northwestern students from Chief of Police Bruce Lewis just after 8:30 p.m., notified students of anonymous reports alleging multiple sexual assaults and possible druggings at the Sigma Alpha Epsilon fraternity house and another unnamed fraternity earlier in the quarter.

It notified students that the University had received a report Feb. 2 alleging that four female students were possibly given a date rape drug at SAE on Jan. 21. The report, which a University spokesman later confirmed was anonymous, alleged that two of the students believe they were also sexually assaulted.

The notification also said the University received an anonymous report Feb. 3 alleging that another female student was sexually assaulted, potentially with the use of a date rape drug, after attending an event at a second, unnamed fraternity house the previous night.

“I was horrified to read about those allegations,” Schapiro told The Daily in a February interview. “I couldn’t believe it.”

In the month since those allegations came to light, Interfraternity Council suspended its social events, SAE’s national headquarters put its NU chapter under a “cease-and desist order” and students have made demands of the University through protest, petition and student government resolution. Students have called for changes ranging from bolstered resources for survivors to an immediate suspension of SAE.

For nearly a month, these allegations have remained at the center of student activism on campus, sparking debate over whether Greek life should continue to exist at NU. The University has yet to make public any new developments in the investigation, but students and staff are focusing their efforts on new measures to help prevent sexual assault on campus and support survivors.

Schapiro, who said there is a “wall” between himself and Title IX investigations, said he could see both the positives and negatives of fraternities and sororities on campus.

“I think at their best they provide safe spaces, just like Hillel and Sheil and Black House and the Multicultural Center,” Schapiro said. “At their worst, they’re horrific.”

Since 2008, the year Schapiro was named university president, the University has removed one fraternity for student conduct violations. The University also temporarily suspended Delta Upsilon in 2013 — the chapter reopened at Northwestern a few years later — and two other fraternities were closed by their national chapters, Jason McKean, interim director of the Office of Student Conduct, said in an email. One of the fraternities closed by its national headquarters is Sigma Phi Epsilon, which has since returned to campus.

In response to people writing to him asking why the University doesn’t kick SAE off campus immediately, Schapiro said he typically replies saying that the University needs to finish its investigation before taking action.

“I just write, first thing is you investigate, and then you consider all options,” he said. “That’s what they’re doing.”

SAE is under investigation by its national organization for “separate sexual-assault and alcohol violations regarding the group,” according to a statement from the national headquarters, which is based in Evanston.

IFC president Rodney Orr said he harbors his own criticisms of the institutions even as a leader in Greek life, noting the “toxic masculinity” that remains baked into much of fraternity culture. Orr said although a lot of fraternity members with leadership positions are engaged on issues of sexual assault prevention, it can be difficult to make sure the message resonates with all the general members.

As IFC works with administrators and students to pinpoint how the institution might reduce the likelihood of sexual assault, Orr said there is currently no plan for lifting the suspension on social activities.

“We really didn’t put a timeline on it,” the SESP junior said. “We think it’s more important to make sure that we can really create the structural change internally and make the community more of a safer place.”

Molly Benedict, executive director of Sexual Health and Assault Peer Educators, said the group is still in the process of creating training material to present regularly to IFC. Meanwhile, the Weinberg senior said there have been increased requests for the group’s “Rape Culture 101” presentation. The group typically receives one request per quarter, and rarely from fraternities, she said. Following the safety alert, Benedict said three fraternities requested the seminar.

Orr said IFC has been using the ban on social activities to reassess the council’s policies on risk management and alcohol. IFC recently passed an amendment to their constitution requiring a member of each chapter to be trained by Men Against Rape and Sexual Assault and SHAPE, Orr said.

MARS President Dan Loizzo, a Weinberg senior, said no specifics of the trainings had been finalized, but the sessions would focus on how to be a responsible bystander in preventing sexual assault.

Orr said the hope was that requiring each chapter have a member educated in talking about these issues would create a “grassroots” movement. IFC is also looking into centralizing policy concerning alcohol at off-campus events, Orr said, but has no concrete changes in mind.

As the director of the Office of Fraternity and Sorority Life on campus, Travis Martin believes there is a place for Greek life on campus despite “valid concerns” about its systemic issues. Martin said fraternities and sororities provide a space for students to call home and spend time with those they see as “like-minded people.”

After the allegations were made public, Martin said OFSL has been working to educate students in Greek life on Title IX policy.

“It takes one thing to overshadow all the good stuff we do,” Martin said. “We really can’t hide or put our heads in the sand about the bad things we have in our community by just saying, look at all the goods things we do.”

This time, that “one thing” came in the form of the brief email notifying students of the alleged assaults on a Monday night in February. The alert came as a result of adherence to the Clery Act, a 1990 federal law requiring the University to release information deemed a “serious or continuing threat to the campus community” to students in a timely manner.

Dan McAleer, deputy chief of administrative services at University Police, told The Daily that in his more than 35 years with the department, he does not recall another security alert involving fraternities. McAleer said crime alerts on cases of alleged sexual assault have been infrequent over his tenure, but have been issued. He said there were two sexual assault-related crime alerts sent out over the past three years, with one alleged to have occurred on campus.

Gloria Graham, deputy chief of police, confirmed that UP received information about the anonymous reports alleging sexual assaults and druggings on Feb. 6, hours before sending out the safety alert. In alignment with University policy, UP can take time to consult with various NU offices before issuing a “timely warning” such as the one sent on Feb. 6.

When asked whether he thinks Greek life — which more than a third of undergraduates at NU are part of — could ever be entirely disbanded at NU, Schapiro said he doubted it.

“I think it’s really pretty unlikely,” Schapiro said. “I think they have a thousand beds.”

Correction: A previous version of this story misstated the year University President Morton Schapiro became president. He was named president in 2008 and started his term in 2009. The Daily regrets the error.