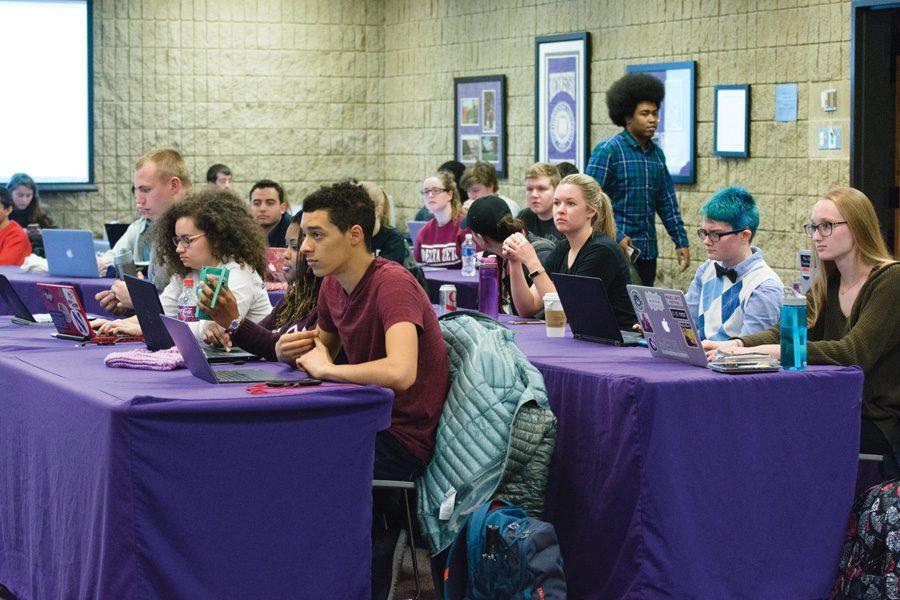 Senators attend Wednesday’s Associated Student Government Senate. The Senate was the most attended Senate of the quarter.

Wednesday’s Associated Student Government Senate was the most attended Senate of the quarter.

Throughout Winter Quarter, Senate has operated on the cusp of having the 25 senators necessary for quorum each week. Without quorum, Senate cannot vote on any legislation.

At Feb. 22’s Senate, former Interfraternity Council senator Mike Seethaler and three substitute senators, all members of the Sigma Alpha Epsilon fraternity, walked out of Senate right before a vote, leaving the room with only 21 senators and delaying the vote until Wednesday, when the resolution passed with 39 votes in favor and two abstaining. The resolution calls for greater accountability for sexual assault and names SAE multiple times.

After Seethaler’s walkout, IFC’s executive board released a statement condemning his actions and publicly endorsing the resolution.

Seethaler did not respond to a request for comment.

On Monday, IFC and ASG released a joint statement announcing Seethaler had been removed and an IFC exec board member would replace him until a permanent replacement is appointed.

In the wake of the walkout, Speaker of the Senate Nehaarika Mulukutla sent an email to senators notifying them if they didn’t consistently show up or appoint a substitute, they would be brought before the Rules Committee. In response, at least 41 senators showed up on Wednesday, well above the 25 needed for quorum and making it the most attended Senate of the quarter.

“I love standing at the podium and seeing how interactive everyone is and talking to people about what they believe in,” Mulukutla, a Weinberg junior, said. “Even if there are 40 million amendments, that means that people are paying attention to what the student body wants and needs.”

At the beginning of Senate on Feb. 22, parliamentarian Shelby Reitman resigned, citing the time commitment. Senate later elected Weinberg junior Daniella Lumpkin as Reitman’s replacement, but she will only serve through the rest of the quarter.

Lumpkin said with only a few weeks to implement her agenda as parliamentarian, she’s not planning on conducting any impeachment hearings for senators based on their attendance. She said it’s important for all student groups to be represented in Senate.

Seethaler and the three substitutes walked out after Senate voted to conduct the vote in a roll call manner. However, Senate is moving toward using roll call during each vote.

On Wednesday, ASG vice president for services Philip Lan presented a new ASG Senate website, which gives access to legislation for all students, not just senators. Students can now easily see who their senators are and how they voted on each issue, as Senate has been voting using the website for most of this quarter and plans to do it exclusively in the future. There is also a feature for substitute senators to be granted temporary access to vote on legislation while in Senate.

Mulukutla said she thought attempting to remove senators who consistently don’t show up to Senate may be a stretch, but she wanted to reach out to senators in different ways.

“What it’s going to be is actually sitting down and saying, ‘Look, we want to restore the legitimacy of this body, and not that it didn’t have legitimacy before but you not showing up and not representing your constituency does delegitimize the process,’” she said.