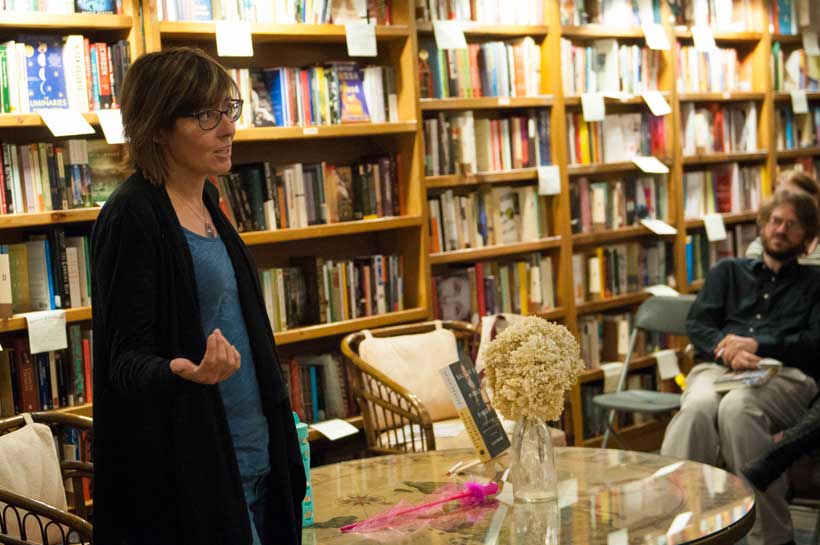 Former Feinberg Prof. Alice Dreger speaks to Northwestern students in 2015 about her resignation at a public event held at Bookends & Beginnings. An ad hoc committee presented a report to Faculty Senate on Wednesday recommending the University issue Dreger an apology.

The committee was formed in response to the two cases, which caused lengthy disputes between Kipnis and Dreger and the administration. The committee was headed by law and political science Prof. Andrew Koppelman and also included performance studies Prof. Carol Simpson Stern, law and public policy Prof. Martin Redish and psychology Prof. Benjamin Gorvine.

Dreger served as a guest editor for Atrium, a magazine edited and published by faculty in Feinberg’s Medical Humanities and Bioethics Program, in 2014 when medical school administrators asked to pull an article describing an author’s experience receiving consensual oral sex from a nurse after he was paralyzed. Dreger said at the time administrators urged the article to pulled because it was “inflammatory” and against the Northwestern Medicine “brand.”

Though the article was eventually republished online following faculty protest, the journal’s budget was cut, and the medical school created a committee that could review and veto faculty editorial decisions. Dreger, a part-time non-tenure-track professor, and another Feinberg professor resigned in protest after the administration failed to acknowledge the censorship of the bioethics magazine, Dreger said.

The report critiques the actions of the University in handling the situation and urges the administration to issue an official apology to the professors who resigned. The report also advised the adoption of a policy barring administrators and public relations staff from participating in the editing or having control of the content of journals edited by faculty or students.

“It is preposterous to ask that a public relations individual be enshrined on the boards of every publication that comes out of our institution,” Stern said. “That was a flagrant violation of Dreger’s academic freedom.”

The University has since revised its sexual misconduct policy, according to the report, stating the Title IX Office may close a case of alleged misconduct if the Title IX coordinator deems there is insufficient information following an initial inquiry into the report. The committee’s report states if this policy had been in place at the time of Kipnis’ case, “it is likely that no investigation would have taken place.”

In response to the Kipnis case, the committee recommended the University adopt new language in its sexual misconduct policy specifying harassment must be “objectively unreasonable” and that expression occurring in an academic, educational or research context does not constitute harassment unless it is “targeted at a specific person … is abusive, and serves no bona fide academic purpose.”

Although the report was presented to Faculty Senate, it was not voted on or endorsed by Senate and only represented the views of the members of the ad hoc committee, Faculty Senate President Laurie Zoloth told The Daily in an email.

Prof. Baron Reed, a senator for the Department of Philosophy, said though the report contained recommendations, it does not carry the status of a formal set of recommendations to the administration, which would have required further consideration from Senate.

Dreger said she was happy with the recommendations related to her case, calling her experience “traumatic” and “terrifically disappointing.” Dreger said she did not want to resign from Northwestern, but was pushed into that position, having to choose between continuing the integrity of her work or caring for her colleagues, who she said feared their program would be punished by the administration if she continued her work.

“That was absolutely ridiculous in terms of the expectations of us to bow to the brand of the hospital to decide what we would and wouldn’t publish,” Dreger said. “So I’m really hoping for an apology.”

Provost Dan Linzer declined to comment for this story, saying Faculty Senate had not formally presented him a copy of the report. Linzer told The Daily in an email that he will not comment on the report before it is voted on in Senate. Feinberg Dean Eric Neilson did not respond for comment by the time of publication.

Other faculty members critiqued the methodology of the report, which was based entirely on public information and did not involve reaching out to individuals involved in the incidents.

Reed said though the report offered valid insight into general issues of academic freedom, he believes the committee did not adequately research the specific incidents to make a balanced assessment or recommendations as they only looked in publicly available information.

“The parts that were commenting on specific cases should have been left out of the report,” Reed said. “Instead they should have focused on the more general issues around academic freedom.”

Kipnis also questioned the research behind her case in the report. The report said the current language used in NU’s sexual misconduct policy would have prevented the incident had it been in place at the time. Kipnis said the committee should have done more investigation into what authority had decided to pursue the Title IX case against her, and she questioned the decision to vest so much authority in the Title IX coordinator on whether to pursue cases.

Stern, who served on the committee, justified the decision to only use public information, stating the purpose of the report was not to investigate the merits of any party of either case. Rather, it seeked to identify how the incidents escalated and propose measures to prevent similar incidents from happening in the future. Stern said she is optimistic the administration will heed the recommendations in the report.

“(The administration has) no desire to find themselves caught up in either of those situations,” Stern said. “I think they’re going to welcome what’s been shared with them.”

Koppelman, who led the committee, said he doesn’t concern himself with how the administration will respond and that the report was intended merely to provide an unbiased assessment.

“We made mere recommendations. We have no power,” he said. “Now somebody who has the power to do something will have to actually do it.”

This story was updated to clarify comments from Alice Dreger.