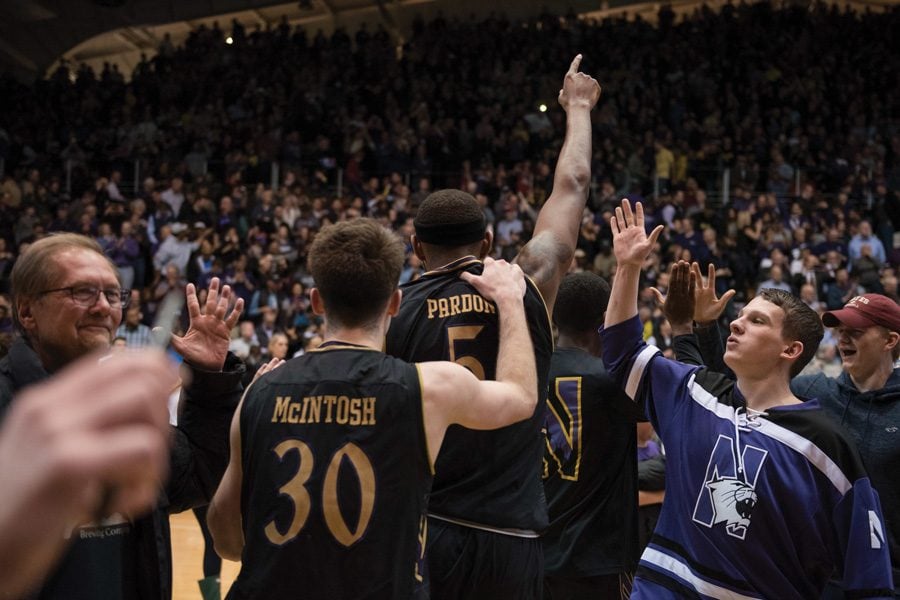 As students rushed the Welsh-Ryan Arena court with an energy 78 years in the making and Northwestern players piled onto Dererk Pardon in celebration, coach Chris Collins didn’t know what to do.

“I kind of felt like I was Jimmy V back in ‘83,” Collins said, referencing North Carolina State coach Jim Valvano, who couldn’t find someone to hug after his team won the 1983 national title.

Senior forward Nathan Taphorn had just tossed a picture-perfect full-court inbound pass with 1.7 seconds remaining to Pardon, who laid in a bucket as time expired. The score broke a tie and gave the Wildcats (21-9, 10-7 Big Ten) a 67-65 win over Michigan (19-11, 9-8) on Wednesday night.

After the dust settled and the pandemonium subsided, NU was left to bask in a crucial victory that could deliver the program’s first-ever NCAA Tournament bid.

“It’s a big night,” Taphorn said. “It’s still settling in, but I really couldn’t think of a better way to go out.”

The victory stopped the bleeding for a Cats team that struggled throughout February, winning just two of seven games. As NU scuffled, pressure mounted for a team fighting against history.

Following the team’s latest loss, a 63-62 last-second heartbreaker at Indiana on Saturday, Collins said he altered his message to his team.

“I came in, and I challenged them,” Collins said. “It was the first time I said, guys, there is pressure. And anything good in life involves handling pressure and succeeding under pressure. … We’ve got to go out and win if we want to do something great.”

The Cats responded against Michigan. Sophomore forward Vic Law led the way, shaking off a nightmare month of February in which he shot 23.8 percent from the field. Against the Wolverines, Law scored 18 points on an efficient 7-of-10 shooting.

“(Law) had amazing energy tonight,” Collins said. “For him to play like this, under this kind of pressure, on the biggest stage — the biggest game any of our guys have played in, in their careers — for him to lead the charge with that, I was really proud of him.”

Early in the game, Law and his teammates went to the basket relentlessly. After going 4-for-18 from deep in back-to-back losses to Illinois and Indiana, NU took just 5 first-half 3-pointers and found 16 of their 30 first-half points in the paint.

“We all knew, if we really want to get our offense going, we need to attack the rim,” Law said.

Law and junior guard Bryant McIntosh found early success driving to the basket, and with Michigan struggling to find an offensive groove, NU led for nearly the entire first half.

Despite tough defense from the Cats, the Wolverines found a better rhythm as the game progressed. They hit on half of their shots after the break, taking the lead twice in the final few minutes of the game.

“We fought so hard to stay in the game, to get ahead in the game,” Michigan coach John Beilein said.

But the Cats responded to each Michigan push. McIntosh hit a layup to retake the lead with 3:16 to go. Senior forward Sanjay Lumpkin laid in another bucket to break a tie with 1:47 left. And in the final moments, Taphorn connected with Pardon to break the deadlock one last time.

The Cats escaped behind the heroics of Taphorn and Pardon, dodging a repeat of last March when Michigan dashed their NCAA Tournament hopes in an overtime Big Ten Tournament battle.

“This is why we all came here,” Law said. “We knew coming in that if we wanted to be different, then this was the game that we needed to take.”

It wasn’t easy, but NU found a way to earn its program-record 21st win. Collins said throughout the game his players kept telling each other “we’re not losing tonight.” With the critical victory under their belt, Pardon said the pressure is finally off as a battle with conference-leading Purdue looms Sunday.

“We have the monkey off our back,” the sophomore center said. “We can just play free. Just play basketball like we played all year.”

This story has been updated to clarify the time period in which Michigan took the lead twice against Northwestern during the second half.